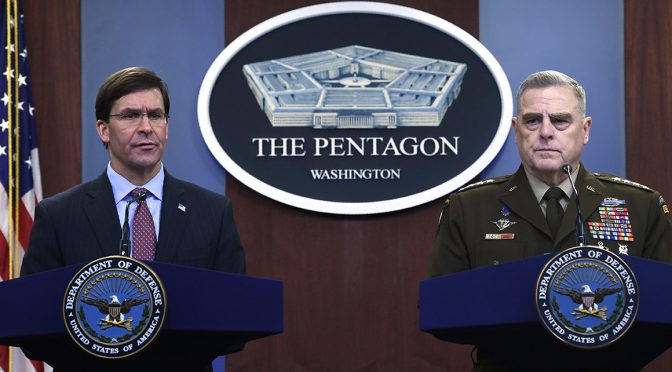 Secretary of Defense Mark Esper is a former Raytheon lobbyist and another example of President Trump’s penchant for frustrating his own policies by appointing to power people who oppose his policies.  Why does Trump think he can expect a representative of the military/security complex to help him wind down Washington’s hegemonic policeman of the world routine?

Esper is out making speeches that the military/security complex needs 5% real increase annually in order to counter Russia and China (see this). It is Washington that is aggressive toward Russia and China, not the other way around.

The military/security complex desperately needs foreign enemies in order to maximize its budget and power.  Russiagate’s purpose was to prevent Trump from removing a valuable “enemy” by normalizing relations with Russia.

The US defense  budget could be cut in half and still be larger than the combined defense budgets of Russia and China.  China spends about half as much of its economy on defense as the US.  If Russia and China intended aggression against the US, wouldn’t you expect to see much higher spending on military?

You could make a case that US defense spending is so high because of inefficiency and enormous profits hidden in “cost overruns.”  If so, then increased real spending should come from strict budetary measures and oversight.

We should not be accepting a military spending system that cannot account for trillions of dollars and is so poorly controlled that it cannot be audited.

Will patriotic conservatives ever realize that blind support for the Pentagon allows the massive rip-off of taxpayers and the neglect of real needs all for nothing but out-sized profits of arms makers?

The military/security complex makes certain that no moves toward peace can succeed.  Its lobbyists have succeeded in undoing all the arms control agreements reached with Russia since the 1960s.

Russia’s President Putin has made repeated offers to extend the last remaining nuclear arms control treaty, but Washington has rejected his offer out of hand.  The reason is obvious.

The corrupt puppet regime of Obama agreed to a trillion dollar increase in nuclear weapons spending, and the military/security complex means to get that money.