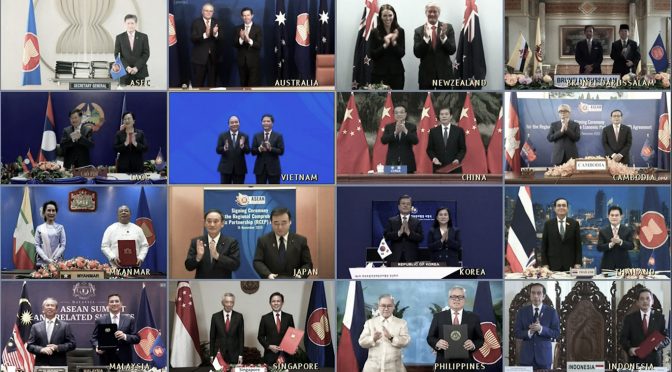 A 15-member South Asian trade agreement that includes China and Japan has put the West on notice that its influence in the region is waning and possibly done for.

For most Americans, the mention of Hanoi elicits memories of the Vietnam war and the peak of the antiwar movement in the United States. Nearly half a century later, unexploded ordnances  (UXO) left behind by U.S. soldiers are still killing and maiming Vietnamese people, but a new day has arrived for the long-suffering southeast Asian country along with fourteen regional countries, including powers China and Japan, with a blockbuster trade agreement that is sure to spark controversy in Washington, which was excluded from the 15-nation Regional Comprehensive Economic Partnership (RCEP).

ASEAN bloc countries Brunei, Cambodia, Indonesia, Laos, Malaysia, Myanmar, the Philippines, Singapore, Thailand, and Vietnam are joining regional powerhouses China, Japan, and South Korea as part of a larger economic bloc that will account for one-third of the global economy and be composed of 2.2 billion consumers.

The deal strengthens an already tight-knit economic community of Asian countries, which in addition to the RCEP, already have bilateral trade agreements amongst each other. It also marks a milestone in the relationship between China and Japan, who enter into a trade agreement together for the first time. More concerning for American industry, in particular, is the risk of losing market access worth $5.3 billion to U.S. industry in the region as these goods shift to production in Chinese firms.

Australia and New Zealand are the odd pair of Western axis nations forming part of the historic pact, whilst the U.S. is left outside looking in at the fruits of its Asia policy over the last 15 years that has now come back to haunt a reeling U.S. establishment after Trump’s disastrous “trade war” and an insistence by his predecessors in the White House to waive America’s big stick in the South China Sea.

The beginning of the end for American economic hegemony in South East Asia took place between the Bush and Obama administrations when the contours of what would become the Trans-Pacific Partnership (TPP) was handed to Barack Obama who would use it to execute his infamous “Asian Pivot” – a policy that mimicked past ‘free trade and war’ tactics employed throughout the world.

The plan sought to encourage trade with South Asian countries, while at the same time expand U.S. military presence in the region to allow America “and not countries like China, to write the rules of the road in the twenty-first century,” according to then-president Obama. Needless to say, China began to retreat from some of the overtures it had made to Western interests in previous years.

Hillary Clinton exacerbated tensions dramatically when she tried to impose U.S. will over China’s territorial disputes in the South China Sea, stating that all such claims should be addressed in a collaborative fashion by the ASEAN bloc countries to keep the “region open for normal commercial activities,” according to Foreign Policy. A move China clearly saw as a threat to its own hegemonic designs upon the region.

Trump adopted Obama’s belligerent position on China and further stoked the flames by starting a trade war against the Asian superpower and withdrawing from the TPP negotiations in 2017. China’s attempt to ally with the EU against the onslaught of U.S.-imposed tariffs was rebuffed by unanimity and ultimately drove the PRC to forge ahead with renewed diplomatic efforts to take the RCEP over the finish line.

Weak counter-arguments are already starting to proliferate across U.S. media with the Wall Street Journal publishing a screed desperately trying to downplay the significance of the RCEP, asserting that the “weaknesses” of the Chinese government prevented it from actually assuming a leadership role in the region, despite the trade deal.

Together with the TPP, which became the Comprehensive and Progressive Agreement for Trans-Pacific Partnership (CPTPP), the RCEP is now the second massive trade agreement in the fastest-growing economic region in the world where the U.S. is persona non grata.

Perhaps the most striking development is the historic rapprochement with Japan; a move which was directly linked to the EU’s rejection of the Chinese proposal, forcing China to turn to its old rival. The low-level trade talks that ensued between China, Japan, and South Korea in 2018 would eventually lead to the finalization of the RCEP economic coup.

The RCEP will eliminate up to 90% of the tariffs on imports among signatories over the next 20 years and also determine rules for e-commerce and intellectual property throughout each nation, which could potentially disrupt major Western markets like the pharmaceutical and tech industries.

Next Up on the Batting Order

With the election all but decided in favor of Joe Biden, the next phase of American foreign policy in South East Asia is likely to remain the same and possibly a return to much more provocative Obama-era ideas like the Air-Sea Battle doctrine, which was first outlined in 2009 to prepare for a military confrontation with China.

ABS became an official military doctrine a year later in 2010 and tested in 2014. It is highly conceivable that a Biden White House will rekindle a more aggressive push against China, even though no official policy statement on China has been released by the Biden transition team. Nevertheless, Obama’s former Vice President has already signaled his intention to continue a belligerent stance against the Asian nation.

“What I’d make China do is play by the international rules” Biden stated at the one and only debate he had with Trump in October. “These are the rules. You play by them, or you’re going to pay the price for not playing by them economically,” Biden affirmed.

The likely future president of the United States is also expected to adopt Trump’s aggressive position on Chinese tech, which follows the same pattern we see from one administration to the next, where fundamental policies meant to expand American hegemonic control over other countries are passed on regardless of the colors on their party headquarters.

The RCEP may be the shot across the bow heard coming from a burgeoning alliance of Asian countries, which not only have the resources to keep up with and surpass American technological prowess but have also closed the gap considerably in terms of military capabilities with the West.

Feature photo | This image made from a teleconference provided by the Vietnam News Agency (VNA) shows the leaders and trade ministers of 15 Regional Comprehensive Economic Partnership (RCEP) countries pose for a virtual group photo in Hanoi, Vietnam, Nov. 15, 2020. VNA via AP