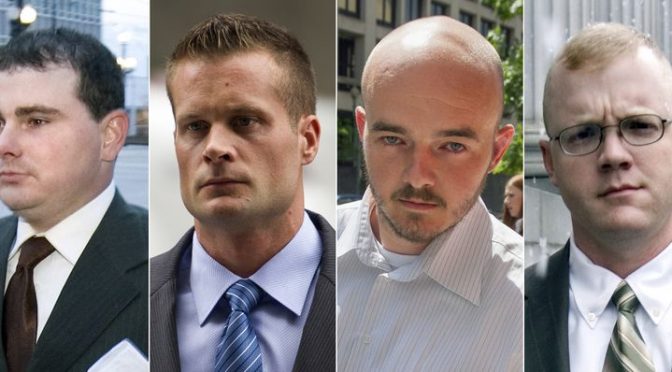 Patriot Trump has pardoned “war criminals” instead of the founder of whistleblowing Wikileaks website, which greatly helped in his presidential campaign back in 2016.

Trump announced he would pardon 15 people and commute the sentences of five more on Tuesday evening, ahead of the Christmas holidays – the traditional time for presidential clemency in the US.

Among the full pardons are Trump campaign aide George Papadopoulos and Dutch lawyer Alex Van Der Zwaan, both jailed for allegedly lying to the FBI by Special Counsel Robert Mueller’s prosecutors in the probe of Trump’s alleged ties to Russia, which found no evidence.

Former Republican lawmakers Chris Collins and Duncan Hunter, who pleaded guilty to insider trading and misuse of campaign funds, respectively, were given full pardons. Another, former Texas Congressman Steve Stockman, had his sentence for misuse of charitable funds commuted to time served, but still has to pay restitution.

Former Blackwater CEO Erik Prince is the brother of US Secretary of Education Betsy DeVos. He sold his stake in the company in 2010 following the controversy.

Last month, Trump pardoned General Michael Flynn, his first national security adviser hounded into resigning by false reports of improper contacts with Russians, later prosecuted by Mueller for allegedly lying to the FBI and dragged through the courts even after DOJ decided to drop the charges.

There have been growing calls for Trump to pardon WikiLeaks co-founder Julian Assange, currently awaiting extradition in London, as well as NSA whistleblower Edward Snowden, but neither were named in Tuesday’s announcement.