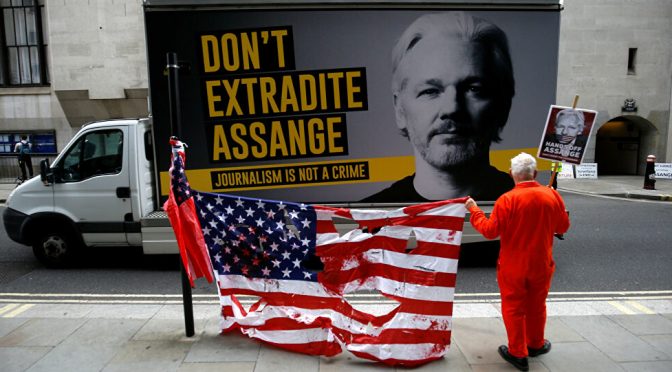 A United Kingdom court has ruled that Wikileaks cofounder Julian Assange must remain in prison, despite an earlier ruling that he could not be extradited to the United States.

Explaining her decision, District Judge Vanessa Baraitser said that, “As far as Mr. Assange is concerned, this case has not been won,” adding that the United States must be allowed to appeal her earlier decision.

Part of the ruling was based upon her assessment of the Australian publisher being a serious flight risk if released, noting he had “huge support networks” that could help him “should he again choose to go to ground.” – Mintpress

LONDON – A high court judge has ruled today that Wikileaks founder Julian Assange will not be extradited for trial in the United States due to physical and mental health grounds, including the risk of suicide. The US have said they plan to appeal the UK decision.

British District Judge Vanessa Baraitser has ruled that extradition would mean “facing conditions of mere total isolation” which would be considered “oppressive” due to Assange’s current state of physical and mental health. Thus, the judge is ordering his discharge under section 91 of the extradition act 2003.

In the meantime, Assange is still being held in custody.

A bail application has been submitted by Assange’s defense team, and will be heard this Wednesday at Westminster Magistrates Court.

Assange’s legal defense team has asked that he be immediately released from London’s Belmarsh prison where he’s been held as an unconvicted prisoner now for over a year-and-a-half.

The judge stated that Assange’s “single-minded determination” of his ASD and Aspergers condition and that “facing conditions of mere total isolation” coupled with his “depressed and sometimes despairing” mental condition strongly indicted that he is someone “who has the intellect and determination” to avert any suicide prevention measures put in place by US prison authorities.

U.S. government officials have 14 days to appeal today’s decision, and have vowed to do so in hopes of extraditing Assange to face trial in the US this year.

“The mere fact that this case has made it to court, let alone gone on this long, is an historic, large-scale attack on freedom of speech,” said WikiLeaks editor Kristinn Hrafnsson. “This is a fight that affects each and every person’s right to know and is being fought collectively.”

However, Judge Vanessa Baraitser appears to still endorse all of the US prosecution’s spurious and unfounded accusations and theories presented in their case, and still claims that Assange’s actions – if proven – would somehow “amount to offenses in this jurisdiction that would not be protected by his right to freedom of speech.”

U.S. Department of Justice had previously indicted Assange on 17 ‘espionage’ charges and one charge of “computer misuse” in relation to WikiLeaks’ publication over a decade ago of leaked military and diplomatic documents regarding the illegal Iraq and Afghanistan wars, carrying a maximum sentence of 175 years in prison.