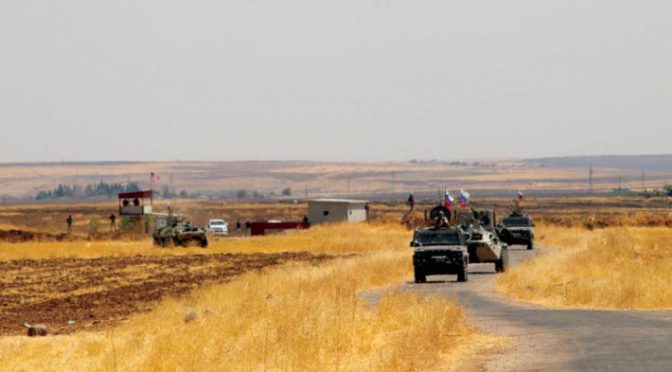 According to the report, the Saratov transited the Bosphorus Strait and moved closer to the Syrian port-city of Tartous, where it is expected to dock in the coming days. The Russian naval fleet currently in the Mediterranean consists of more than 10 combat and auxiliary ships, which are part of different units in the Navy.

This report was confirmed by the Turkish maritime observer and photographer, Yoruk Isik, who released a set of photos showing the Saratov transiting the Bosphorus Strait on Monday, January 11th.

The large landing ships and auxiliary ships of the Russian Navy, in addition to ships chartered by the Russian fleet, are participating in the process of transporting supplies to the Russian aviation group stationed at Hmeimim Airport (Lattakia countryside).

Over the last five years, the Russian Armed Forces have increased their shipments to the Syrian government, as they not only provide humanitarian aid, but also new weapons to the Syrian Arab Army (SAA).

Just days prior to the Russian warship reinforcement, a large convoy of vehicles belonging to the U.S.-led Coalition entered northeastern Syria, making its way to an army base in the Deir Ezzor Governorate. The large convoy was observed entering from Iraq this past weekend.

Brett McGurk has been picked by the Biden administration to join the NSC as coordinator for the Middle East and North Africa.https://platform.twitter.com/embed/index.html?dnt=false&embedId=twitter-widget-1&frame=false&hideCard=false&hideThread=false&id=1347732363128827905&lang=en&origin=https%3A%2F%2Fwww.zerohedge.com%2Fgeopolitical%2Frussia-us-are-building-their-forces-syria-ahead-biden-inauguration&siteScreenName=zerohedge&theme=light&widgetsVersion=ed20a2b%3A1601588405575&width=550px

Brett McGurk has been an outspoken supporter of US military presence in Syriahttps://t.co/HrU0lahvol — Middle East Eye (@MiddleEastEye) January 9, 2021

The agency quoted local sources as saying that a column of about 30 vehicles, including trucks loaded with heavy weapons, including cannons, and tanks belonging to the U.S. army, entered Al-Hasakah from Iraq’s Nineveh Governorate, before making their way to the base in Deir Ezzor.

The sources indicated that the convoy took the Al-Kharafi Road between Deir Ezzor and Al-Hasakah, accompanied by U.S. helicopters and military vehicles. This convoy of US military reinforcements is likely part of the troop rotation that takes place every few weeks; they often enter the country from neighboring Iraq and move supplies to one of their bases inside the Syrian Arab Republic.