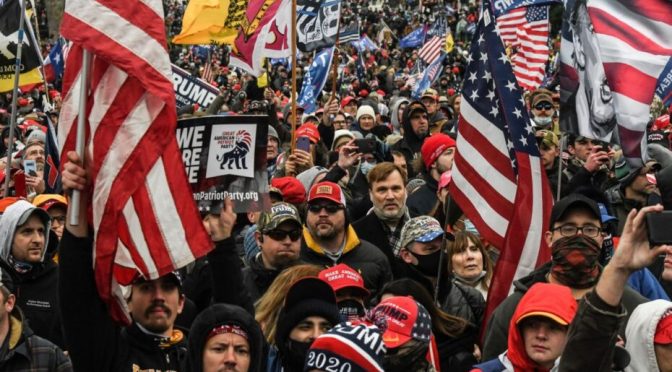 Whether civil war is coming will depend on the degree of stoicism prevalent among the Deplorable multitudes.

I hear the sons of the city and dispossessed
Get down, get undressed
Get pretty but you and me
We got the kingdom, we got the key
We got the empire, now as then
We don’t doubt, we don’t take direction
Lucretia, my reflection, dance the ghost with me

Sisters of Mercy, Lucretia my Reflection

9/11 opened the gates to the Global War on Terror (GWOT), later softened by Team Obama to the status of Overseas Contingency Operations (OCO) even as it was suavely expanded to the bombing, overt or covert, of seven nations.

9/11 opened the gates to the Patriot Act, whose core had already been written way back in 1994 by one Joe Biden.

1/6 opens the gate to the War on Domestic Terror and the Patriot Act from Hell, 2.0, on steroids (here is the 2019 draft ), the full 20,000 pages casually springing up from the sea like Venus, the day after, immediately ready to roll.

And as the inevitable companion to Patriot Act 2.0, there will be war overseas, with the return in full force, unencumbered, of what former CIA analyst Ray McGovern memorably christened the MICIMATT (Military-Industrial-Congressional-Intelligence-Media-Academia-Think Tank) complex.

And when MICIMATT starts the next war, every single protest will be branded as domestic terrorism.

Whatever really happened on 1/6 in the militarized Valhalla of a superpower that spent untold trillions of dollars on security since the start of the millennium, the elaborate psy op/photo-op circus – complete with a strategically photogenic MAGA Viking actor – could never had happened if it was not allowed to happen.

Debate will rage till Kingdom Come on whether the break in was organic – an initiative by a few hundred among at least 10,000 peaceful protestors surrounding the Capitol – or rather a playbook color revolution false flag instigated by an infiltrated, professional Fifth Column of agent provocateurs.

What matters is the end result: the manufactured product – “Trump insurrection” – for all practical purposes buried the presentation, already in progress, of evidence of electoral fraud to the Capitol, and reduced the massive preceding rally of half a million people to “domestic terrorism”.

That was certainly not a “coup”. Top military strategist Edward Luttwak, now advising the Pentagon on cyber-war, tweeted, “nobody pulls a coup during the day”.

That was just “a show, people expressing emotions”, an actually faux coup that did not involve arson or widespread looting, and relatively little violence (compare it to Maidan 2014): talk about “insurrectionists” walking inside the Capitol respecting the velvet ropes.

A week before 1/6, a dissident but still very connected Deep State intel op offered this cold, dispassionate view of the Big Picture:

“Tel Aviv betrayed Trump with a new deal with Biden and so they threw him to the dogs. Sheldon Adelson and the Mafia have no trouble switching sides for the winner by hook or crook. Pence and McConnell also betrayed Trump. It was as though Trump walked as Julius Caesar into the Roman Senate to be stabbed to death. Any deal Trump makes with the system or Deep State will not be kept and they are secretly talking about ending him forever. Trump has the trump card. Martial law. Military tribunals. The Insurrection Act. The question is whether he will play it. Civil war is coming irrespective of what happens to him, sooner or later.”

Whether civil war is coming will depend on the degree of stoicism prevalent among the Deplorable multitudes.

Alastair Crooke has brilliantly outlined the Top Three main issues that shape Red America’s “Epiphany”: stolen elections; lockdown as a premeditated strategy for the destruction of small and mid-size businesses; and the dire prospect of ‘cancellation’ by an incoming woke ‘soft totalitarianism’ orchestrated by Big Tech.

Cue to a Corpse Reading a Teleprompter, also known as The President-Elect, and his own ominous words after 1/6: “Don’t dare call them protesters. They were a riotous mob. Insurrectionists.

Domestic terrorists.” Some things never change. George W. Bush, immediately after 9/11: “Either you’re with us, or with the terrorists”.

That’s the hegemonic, set in stone, narrative now being implemented with an iron fist by Big Tech. First they come for POTUS. Then they come for you. Anyone, anywhere, not following Big Tech’s Techno-Feudalist diktat WILL be cancelled.

And that’s why the drama is way, way, bigger than a mere discombobulated POTUS.

Every single institution controlled by the ruling class – from schools to mass media to the way workplaces are regulated – will go after the Deplorables with no mercy.

Politically, the Deplorables only have Trumpism. And that’s why Trumpism, with a possible avenue to become an established third party, must be smashed.

As much as the 0.0001% is more terrified by the possibility of secession or armed revolt, they need urgent pre-emptive action against what is, for now, a nationalist mass movement, however inchoate its political proposals.

The “unknown unknown”, to evoke notorious neo-con Donald Rumsfeld, is whether the exasperated plebs will eventually reach for the pitchforks – and make the 0.0001% feudal hacienda ungovernable. And then there’s a literally smokin’ element – those half a billion guns out there.

The 0.0001% knows for sure that Trump, after all, was never a radical revolutionary change agent. Inchoately, he channeled Red America’s hopes and fears. But instead of the promised glitzy palace adorned with gold, what he delivered was a shack in the desert.

Meanwhile, Red America, intuitively, understood that Trump at least was a useful conduit. He lay bare how the corrupt swamp actually moves. How these “institutions” are mere corporate puppets – and completely ignore the common man.

How the Judiciary is utterly corrupt – when even POTUS cannot get a hearing. How Pharma and Tech actually expanded the MICIMATT (MICIMAPTT?) And most of all, how the two party paradigm is a monstrous lie.

So where will 75 million disenfranchised voters – or 88 million Twitter followers – go?

As it stands, we’re deep into Hardcore Class War. The Top of the Scam Gang are in full control. The remains of “Democracy” have gelled into Mediacracy.

Ahead, there’s nothing but ruthless purge, protracted crackdown, censorship, blanket surveillance, smashing of civil liberties, a single narrative, overarching cancel (in)culture. It gets worse: next week, this paranoid apparatus merges with the awesome machinery of the United States Government (USG).

Cui bono? Techno-Feudalism, of course – and the interlocking tentacles of the trans-humanist Great Reset. Defy it, and you will be cancelled.