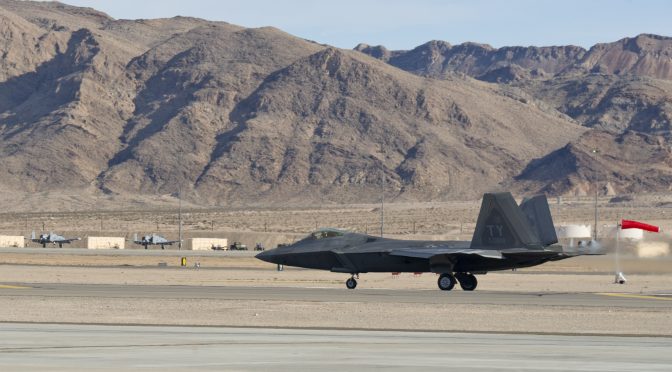 The next Pentagon Red Flag exercise runs January 25 to February 12 from the Nevada Test and Training Range and Nellis Air Force Base. Manilo Dinucci reported in June [1] that the Nellis 5G network would be fully operational and an active component of this year’s exercises.

At Red Flag 2021, 5G relocatable cell towers, that can be set up and taken down in less than an hour, will be probably already operating to be tested in a real environment. Nellis base is the fifth base selected by the Pentagon to test the military use of 5G: the others are located in Utah, Georgia, California and Washington State.

5G will allow the entire command and control system of the United States armed forces to be strengthened worldwide.

5G will play a decisive role particularly in the use of hypersonic weapons which travel at speeds exceeding 10 times that of sound also equipped with nuclear warheads.

5G will also be extremely important for secret services, making control and intelligence systems much more effective than those currently used.

These exercises significantly increase the radiofrequency electromagnetic radiation (RF-EMF) emissions in the U.S. due to radar, communications, GPS jamming, EMF weapons, satellites, and other equipment. The serious health problems experienced throughout the country have included cardiac disorders, severe sleep disruption, microwave hearing, and other neurological problems. RF-EMF also impacts the immune system – at a time when Americans need a strong immune system — and is a known carcinogen and causes genetic and DNA damage. In addition, it harms wildlife including bees and other insects, especially 5G millimeter waves.[2]

Due to the environmental and public health hazards, these military exercises must be halted immediately. I urge everyone to contact the U.S. Surgeon General and other state and federal officials now.

2021 exercises at the Nevada Test and Training Range:

Despite the COVID19 disaster, the Pentagon is conducting Red Flag and other military exercises in conjunction with the Nevada Testing and Training Range and Nellis AFB. Red Flag 21-1 is due to begin Jan. 25 and last into February 12.

These exercises negatively affect the public health and the environment by using high levels and far-reaching patterns of EMF emissions for jamming and EMF warfare practices that cover many parts of the United States and may extend into Canada, Mexico and the Caribbean nations. The military have added progressive capabilities to these exercises, to now include their new 5G network in conjunction with satellites.

I urgently request that you halt these exercises immediately in the interest of the public health and welfare, and the security of the nation.

Medical experts and EMF research scientists have warned about the hazards of radiofrequency electromagnetic radiation for years [3]. During past Red Flag exercises, members of the public reported the sudden onset of serious health problems, only to find out that symptoms started when these military exercises began.

These harmful emissions can affect public health in a myriad of ways including heart function, cognition, and cause increased incidence of migraine or headache, seizures, heart arrhythmia, sleep disturbances, skin problems, clicking or ringing in the ears, flu-like symptoms, difficulty breathing, pain, and other health problems. RF-EMF also impacts the Immune system – the last thing the public needs right now – and exposure causes cellular stress, rouleaux formation in the blood, and DNA damage. This will also affect pets and wildlife.

The most vulnerable people are people who are already disabled by electromagnetic sensitivity (EMS) — a functional impairment that occurs from exposure to EMF – or have other EMF-sensitive medical conditions including nerve damage, cancer, heart disorders, amputations or susceptibilty to stroke, or those with medical implants or devices. Many of people with EMS are already extremely ill from current levels of RF-EMF, suffering excruciating pain and crippling effects. The cities of Boston and Philadelphia [4] warned in 2013 about the suffering of the EMF-disabled. Based on a 1998 prevalence survey by the California Department of Health Services [5], millions of Americans could be at serious, even life-threatening risk from these drills.

The European Academy of Environmental Medicine released their report “EUROPAEM EMF Guideline 2016 for the prevention, diagnosis and treatment of EMF-related health problems and illnesses,”[6] expanding on the 2012 report by the Austrian Medical Association.[7] Have you read these reports?

However, in the 1990s, Congress defunded the EPA’s RF-EMF research and work on developing federal standards, and a recent FOIA request revealed that the last EPA review of literature was in 1984.[8] That is unconscionable and a violation of the public trust.

In 2015, the Canadian Parliament held three days of hearings on the public health hazards created by rising levels of EMF emissions and lax regulations, which the CMAJ reported.[9] And now there are the U.S. National Toxicology Program and Italian Ramazzini Institute results along with older cancer studies that show this radiation is a carcinogen.

The Naval Medical Research compiled a lengthy bibliography[10] in 1972 of studies showing biological effects. Extensive military research for decades has weaponized these effects, including the poppers used in Iraq and the Active Denial System using millimeter waves which causes intense burning sensations. These same millimeter waves are being deployed for 5G.

A COVID variant is causing additional concern for medical professionals. The DNA- and gene-damaging effects of RF-EMF radiation exposure are well known, including CTIA-Wireless Association sponsored research by Dr. Henry Lai, and a study by Belyaev in 1996 finding altered genetic structure in E. Coli bacteria at exposure levels of 0.0000000000001 microwatts per cm2, [11] far below U.S. exposure limits of 1000.0 microwatts per cm2. Increasing the public exposure to RF-EMF makes no sense to any rational person.

I request that you take leadership on this critical matter now and halt these military exercises immediately for this year and the indefinite future to protect the public, the environment, and the national security. The continuance of these exercises risks catastrophic harm and complicates an already difficult and unpredictable medical situation. These experiments are done without any public notification or advance warning, public hearings, environmental review, public input, or full informed consent from the public. The public is shut out of decision-making, despite paying the bill. This must end now.

A CE/CME-accredited virtual EMF Medical Conference (EMFMC) will be held January 28-31. It will cover RF-EMF/wireless radiation health effects. Please inform your staff and the national health officers of this critically important and timely conference. It offers 20.5 hours of CME. Please attend this conference.

Please respond at your earliest to my request.

For more information on Red Flag and the 2018 Red Flag drill, read this.

Nina Beety is a researcher, writer, and educator on public policy, the environment, and wireless radiation hazards. Her reports for officials and the public on Smart/AMI utility meters are on her website www.smartmeterharm.org. She lives in California.

One thought on “Pentagon’s “Red Flag Exercise”: The Role of 5G, US Command and Control”