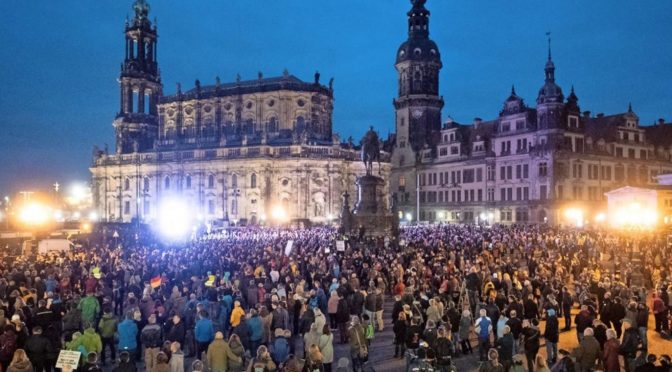 US media provides little news of Europe.  What is provided is strictly “narrated.”  Consequently, Americans are unaware of what seems to be a spontaneous, leaderless, popular uprising against mandated lockdowns and masks.

There are large demonstrations in Germany, and they have spread to Vienna and to Copenhagen.  The people have more sense than the public authorities and reject the Covid mandates.

Klaus Madersbacher, proprietor of the antikrieg.com website, thinks that Germans are associating the fear-based campaign that is asserting new government controls over people’s lives and activities with an American hegemonic agenda. He believes that it is a revolutionary mass movement that should now become organized under leadership in order to achieve the independence of countries and their peoples.

One wonders if insouciant Americans are capable of a revolutionary temperament or whether the only protests Americans will witness are the Establishment-funded Antifa and BLM riots that loot and burn private businesses.

Here is Madersbacher’s analysis of what he is witnessing.

Instead of serving their own people, European regimes serve the interests of Washington, which seems driven to obtain supremacy over the world for material reasons and also as a way out of the economic crisis in which it finds itself.

The theater with and around the coronavirus is staged with the explicit intention of distraction and of creating fear and a climate of general insecurity that leads to control measures that enable hegemonic power, perhaps resulting in a “global reset” that serves the interest of the few at the expense of the many.

It is against these measures that the Germans and neighboring nations are rising up in an unprecedented and unforeseen readiness to defend themselves as a people and a society.

I read the protests of the last several months as clear expressions that the German people are no longer willing to submit to puppet governments that fail to represent the interests of the people.

Germans and Europeans are used as support for Washington/NATO’s push against Russia and Asia, which is clearly against European interests. If spontaneous cooperation is achieved among European peoples, Washington’s aspirations are defeated, and representative governments will form in place of Washington’s puppet states.

Since the ruling European governments are neither willing nor able to represent the interests of their peoples, they have lost the confidence of the people and forfeited the right to remain in power. Constitutionally prescribed steps can be followed as far as possible to remove them from office.

As a first step, a revolutionary council should be elected consisting of two or three members per federal state.

The revolutionary council will accept no guidance from the EU, Washington, or any agreements that limit the exercise of national sovereignty.

Existing governmental and financial institutions will continue in operation, but the revolutionary council will reestablish all civil liberties, such as freedom of movement, freedom of income, freedom of expression, freedom of assembly and freedom of travel. The institutional structure of government will then be thoughtfully reconstructed to be consistent with human rights and national wellbeing.

The Covid control measures will be revoked.

The campaign of fear will be halted, and open public discussion by independent medical and scientific experts will be used to determine reasonable measures to protect the population from Covid.

Layoffs, terminations & repossessions resulting from Covid ordinances will be reversed.

The Iranian Revolution against the Shah shows that revolutionary mass movements can be peaceful. To reconstruct the state to serve the people, a constitutional requirement is required that permits the passage of no law that cannot be proved in open discussion to serve the people over organized interests.  To protect the people’s interest, schooling will be used to support the ethos that honor, not material interests or service to ambition, is the basis for government service.

These idealistic aims will never be fully achieved, but their conscious cultivation can preserve the freedom of European peoples.