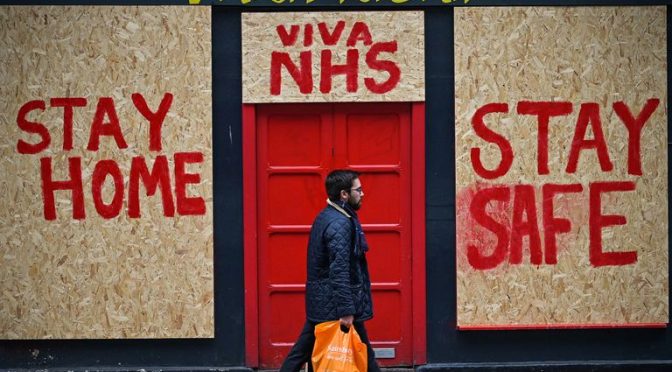 What began in March 2020 as a three-week lockdown to ‘save the NHS’ has turned into a year-long clampdown on fundamental liberties with the spectre of freedom through vaccination (‘COVID status certificates’) and the eventual roll out of all-encompassing digital IDs on the horizon.

In the meantime, children’s education, small independent businesses, livelihoods and lives have been wrecked all in the name of a coronavirus whose impact has been overstated – certainly if we take time to deconstruct the media narrative of 120,000 ‘COVID-19 deaths’ in the UK to see how that figure has been arrived at.

For example, the vast majority of the deceased had on average almost two serious life-threatening co-morbidities and ‘COVID deaths’ are defined as someone who had a positive COVID test result within 28 days of death, regardless of subsequent cause of death.

Fear rather than science has been key to UK government strategy. Using lockdowns to control the virus has little if any scientific basis. On the other hand, there is much evidence that shows lockdowns destroy lives. Little wonder then that behavioural strategists are included as part of the top committee (SAGE) advising ministers. And little wonder, therefore, that the public overestimates the threat of COVID-19.

What has disturbed many commentators, such as former Chief Justice Lord Sumption, is that the media, politicians and ordinary people have rolled over and accepted the erosion of fundamental civil liberties – and by implication, the tyranny of lockdown, based on a corruption of science and the type of medical hubris that Ivan Illich alluded to many decades ago.

These are liberties that ordinary people fought and struggled (and often died) for down the ages.

What is just as disturbing is that prominent commentators on the ‘left’ have supported the restrictions, often calling for tighter controls. Other voices on the left have been conspicuous by their silence. These figures have wholeheartedly bought into the official COVID-19 narrative – the people who are usually first in line to criticise and challenge anything a Conservative administration does.

The aim here is not to regurgitate what has already been stated in the many articles that have appeared over the last year about the current crisis of capitalism or the ‘great reset’. The aim of this article is intended as a brief reminder.

There is a tradition of struggle in Britain which many people appear to have abandoned – the very people who would be expected to carry on that proud tradition.

Arthur Leslie Morton’s ‘A People’s History of England’ is a classic text. Morton (1903-1987) takes us back to when humans first inhabited England and then on a forward journey that ends on the eve of the Second World War. His book shows that countless millions have inhabited the place we call England, from ancient hunter-gatherer tribes and the ‘Beaker People’, to the Vikings, Normans and those of the industrial age.

If you are familiar with the words of the late astrophysicist Carl Sagan, they may well resonate when reading Morton’s book. Sagan stated that generals, kings, rulers and politicians have spilled rivers of blood just to become temporary masters of some or other part of the planet and that endless cruelties have been visited by the inhabitants of one corner of the globe upon inhabitants in another corner.

However, in all of this cruelty and bloodshed, Morton accounts for the plight of the ordinary person, both in England and abroad, who has borne the brunt of war, famine, exploitation and the political machinations of tyrants and unscrupulous leaders, whether Roman, medieval monarch, feudal baron or modern-day capitalist.

He describes the rise of feudalism and its decline, the agrarian revolution, the English Revolution, the rape of Ireland, colonial expansion and the Industrial Revolution.

As this land grew to be the pre-eminent world power, ordinary people struggled to find a voice within these shifting tectonic plates of history. Nevertheless, they succeeded.

Morton discusses the development of the working class movement and subsequent struggles: he notes the impact of the Peasants’ Revolt, Peterloo, trade unionism and many other inspiring events that litter the historical landscape of England.

The conclusion to be drawn is that most change that has benefited ordinary people has resulted from the actions of ordinary folk themselves. Such benefits have never been handed out freely by the rich and powerful. This is true for women’s rights and political freedoms, as much as it is for workers’ rights or any other number of gains.

This is worth bearing in mind as Boris Johnson, Matt Hancock et al decide whether to ‘give back’ to the public their liberties. History shows that once the powerful seize more power, they do not cede it unless forced to.

If Morton shows us anything, it is that, when conscious of their collective interests, ordinary folk acting together can and do make a difference.

Whether we look at Klaus Schwab’s ‘great reset’ and what it entails, the struggle of Indian farmers against Facebook, Google, Amazon and Cargill (etc) or Bill Gates and his plan to vaccinate the planet, geoengineer the climate or roll out his and his tech-giant cronies’ warped vision for a one-world fake-food agriculture, it is becoming increasingly clear that the rich and powerful are mounting an ultimate power grab.

Based on their warped techno-utopian vision of the future, they want to exert total control of farming, food, nature, personal identities, information, the climate, our bodies – just about everything that will shape the rest of this century and beyond.

They want to ‘build back better’ by ensuring they own everything and you own nothing. Lockdowns have been a convenient tool for helping to kick-start their ‘new normal’.

A L Morton’s book can teach us much about resisting tyranny – but only if we listen.

An abridged version of ‘A People’s History of England’ (edited by Giles Wynne)  can be accessed here.

Colin Todhunter is an extensively published independent writer and former social policy researcher based in the UK and India.