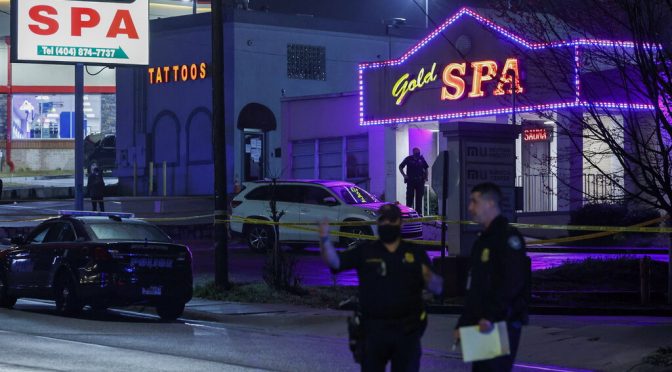 There’s now an ongoing operation to further tear America apart, i.e., shootings of Asians for “spreading the COVID19 pandemic.” These shooters, paid or not, need their skull examined immediately for not realizing that everyone is a victim in the ongoing World Economic Forum sponsored coup against humanity itself.

ACWORTH, Ga. — Eight people were shot to death at three massage parlors in the Atlanta area on Tuesday evening, the authorities said, raising fears that the crimes may have targeted people of Asian descent.

Six of the people killed were Asian, and two were white, according to law enforcement officials. All but one were women.

A suspect, identified as Robert Aaron Long, 21, of Woodstock, Ga., was captured in Crisp County, about 150 miles south of Atlanta, after a manhunt, said the authorities, who had earlier released a surveillance image of a suspect near a Hyundai Tucson outside one of the massage parlors.

As the media says, this is just the latest in a surge of anti-Asian violence in recent weeks. But people of other ethnicity were also victimized…

The  nation has been rocked by yet another mass killing — the shooting of eight people at massage parlors in Atlanta. But this one is even more ominous than usual, because six of the victims were Asian women at a time when hate crimes and attacks against Asian Americans have soared. It also comes as relations between the U.S. and China are deteriorating, making it even more imperative that the U.S. quash this wave of persecution.

Tension between the two superpowers has been rising for a number of years over issues like human rights, trade and territorial disputes in the South China Sea. But in recent years negative sentiment towards China has spiked to previously unimaginable levels. In the U.S., this unfavorable opinion is almost as strong among Democrats as among Republicans, and is common among people of various races. And the negative sentiment is worldwide, extending to many countries in both Europe and Asia.

It’s possible to see the latest deadly attack as one more manifestation of a wave of free-floating hatred that has afflicted America in the last few years. In 2017, a shooter targeted Indian men in Kansas, probably mistaking them for Muslims. In 2018, a shooter killed 11 Jewish people at a synagogue in Pittsburgh, and the following year there was another synagogue shooting. In 2019, a man killed 23 people, mostly Latino, at a Walmart Inc. store in El Paso, Texas.

Though these attacks came at a time when mass shootings have been on the rise in general, in all of these cases the killers had imbibed generous helpings of right-wing propaganda. The rampage in Atlanta might simply mean that this hatred has found a new target; U.S. investigators at this point haven’t linked the shootings to a hate crime against Asian Americans.

While the Atlanta killer was particularly deadly, he wouldn’t be the first in targeting Asian Americans for violence. In 2020, hate crimes against Asian people in the U.S. went up by 150%, with as many as 3,000 violent incidents throughout the country. That can’t be explained by the general rise in violence — murder did go up in the year of the pandemic, but only by 30%, and aggravated assault by only 6%.

Elderly Asian men have been killed on the street in San Francisco and Phoenix, and other elderly Asians were injured in similar attacks in Oakland and New York City. Robberies against Asian-owned businesses have increased, and there have been bombs or suspicious fires at Asian community centers in some cities. Across the country, Asian Americans have been spit on, threatened and attacked with slurs.

The Deep State knows that the dissenters to the ongoing lockdowns are increasing by the day, and mass gene therapy injections are being suspended in some EU countries, which have experienced injuries and deaths, days after mass “vaccinations” were implemented.

Blaming people of other colors of just about anything is one of the simplest ways to deflect one’s responsibility, and culpability, in the ongoing genocidal economic lockdowns and mass mRNA gene therapy injections.

Just imagine if the shooters’ guns are pointed in the right direction, these shooting operations should have solved the age-old problem for good. It’s for that reason that targeting Asians is not a patriots’ idea, but perpetrated by the same sociopaths who are now implementing the COVID19 coup.

It’s a shame that all the mainstream journalists could do, instead of explaining why this is happening at all, is fanning the flame of further societal division, as if “facemasking” and “social distancing” are not enough.