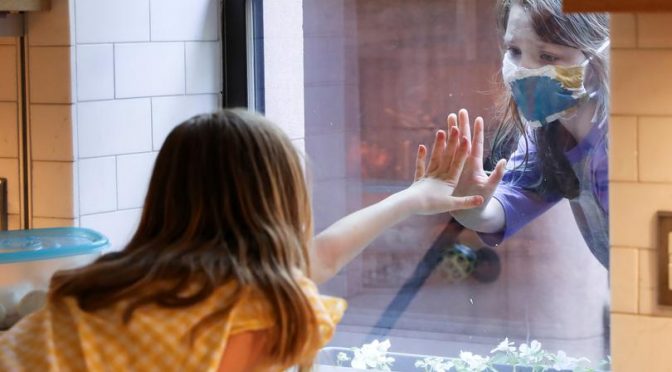 At the 2013 Global Health Summit in Beijing, China, 112 key individuals from governments, the private sector, international organizations, and other groups, met to discuss how the next 100 years of global health may look. The summit released a white paper, titled: Dreaming the Future of Health for the Next 100 Years, which was funded by the Rockefeller Foundation.


In a section of the report that detailed what the participants were relatively certain of, there is a description of life that has many similarities to what has transpired in response to Covid, including isolation and an increasingly virtual life:

“The abundance of data, digitally tracking and linking people may mean the ‘death of privacy’ and may replace physical interaction with transient, virtual connection, generating isolation and raising questions of how values are shaped in virtual networks… Education will undergo major transformation due to convergence of insights from cognitive psychology and new online tools (chunking, crowdsourcing, chatrooms, mass open online courses) creating learning spaces in the ‘many to many’ forms of peer to peer learning, outside formal classrooms” (p.8).

The report then moves on to hypothesize on four different scenarios that could take place in the future, under a section, titled: Waking Up in 2050. In Scenario 1, The Scramble for Health Resources, there is a dystopian depiction of what life may be like in January, 2050:

“We are living in a competitive and insecure world! Yesterday Global Health Inc sent the armed robots to a small pirate factory that had been 3d printing skin tissue for street sale in our poorer communities. The market for it is high due to injuries from the uncontrolled burning of waste for heat, as many cannot afford the new energy tariffs. There have many deaths from hypothermia in poorer, elderly people.

Global Health Inc claim that the factory aren’t registered with their wealth fund, that the tissue was substandard and that they were implementing the global contract they have for policing public health. People in poorer communities are angry as they relied on that factory for cheap products and accuse Global Health Inc of protecting their patents. There are rumours that some from Section X of the city, you know the unplanned area where the 2046 solar flare refugees are living, well that some of them have torn off their sensors and are planning a food and fuel raid on the wealthy suburbs in the south” (p.13).

The description what life may be like in January, 2050, continues:

“Many are worried about the possibilities of infectious diseases from Section X spreading to their neighbourhood. Their private health management schemes have sent reassuring messages that they are covered in their packages by a fault-free surveillance system that is able to detect any disease, and reminders to ensure that they have had their annual sensor checks” (p.13).

In Scenario 2: Health if we Make it Happen, the report discusses the possibility of a Global Standards Agency in Beijing, and a common international currency, by January, 2050:

“We were briefed by videoconference from the Global Standards Agency in Beijing on the latest norms cities should reach on environment, wellbeing, local production and recycling. We raised our concern that state authorities are not enforcing the standards. The Community Food Producers Association asked why the findings of the 2047 evaluation on investing in state and citizen enforcement were not being acted on. The representative of the GSA told us that is a local matter, but Greg from the CFPA raised that local government funds collapsed after the common international currency (CIC) was adopted” (p.14).

There are many other sections of this paper that are worth noting, as they provide insights into how elite networks see the future. For instance, the paper argues that there will probably be a decline in fertility, a trend we are already seeing in many countries:

“People will live longer and fertility will decline, with women exercising their reproductive rights” (p.6).

The report notes that humans will most likely “interact more with artificial intelligence,” and envisages that re-engineering may give birth to hybrid human-robot beings:

“We will interact more with artificial intelligence. The use of robotics, bio-engineering to augment human functioning is already well underway and will advance. Re-engineering of humans into potentially separate and unequal forms through genetic engineering or mixed human-robots raises debates on ethics and equality. A new demography is projected to emerge after 2030 of technologies (robotics, genetic engineering, nanotechnology ) producing robots, engineered organisms, ‘nanobots’ and artificial intelligence (AI) that can self-replicate. Debates will grow on the implications of an impending reality of human designed life” (p.7).

In relation to the power of nation-states, the paper argues that states power may diminish more, giving rise to megacities, local identity politics, and global networks:

“The power of states and their ability to provide an effective nexus between the local and global levels may diminish in the face of growing megacities, local identity politics, increasing social exclusion, increasing private influence on all spheres of life, widening liberalisation and stronger global networks” (p.10).

Clearly, this report includes many insights relating to the kind of world elite networks of power see coming into view, from the death of physical interaction to a global international currency. The future is not decided, however, and, ultimately, your future will be shaped by you – by what you accept, oppose, and desire.