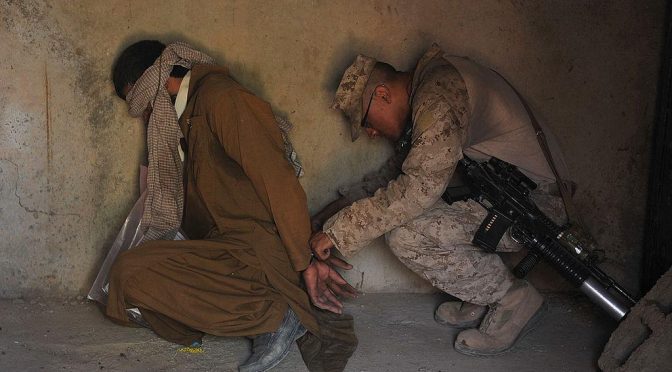 To manufacture consent for its own constant aggressions the US claims its competitors are guilty of even greater crimes – sheer inventions that never happened.

A revolutionary’s first commitment is to the truth. But deciphering the truth has become a difficult task in the United States, not least because the misinformation apparatus is both enormous and tied directly to the imperatives of imperialist state itself. Whatever separation that existed between the military industrial complex and the U.S. corporate media is a thing of the past.

U.S. imperialism has spent much of the last decade gradually escalating a New Cold War with China and the media has manufactured consent for each and every one of its aggressive policies. A new Gallup poll revealed that 80 percent of the U.S. public  possess a negative opinion of China. Only Iran and the DPRK, two of the most villainized nations of the U.S. propaganda machine, are viewed with more disdain among Americans.

The U.S. public is bombarded with anti-China media headlines from across the political spectrum. Humanitarian interventionist lies represent the most dangerous form of misinformation currently fueling the U.S.’s New Cold War. Most prominent is the fable that a “genocide” is being committed against Muslims in China’s Xinjiang Uyghur Autonomous Region.

This month, CNN published a report  from the Newslines Institutethat claims to independently verify “genocide” in Xinjiang for the first time. The report offered no revelations beyond claims that have already been regurgitated for several years by dubious sources such as Radio Free Asia and Adrian Zenz , a far-right Christian fundamentalist who believes it is his God-given mission to take down the Communist Party of China.

The Newsline Instituteis itself a dubious source of information. The head of the Washington-based think tank, Ahmed Alwani , is a former advisor to the U.S. African Command. It should be noted that the U.S. African Command was a leading force in the U.S.-NATO overthrow of Libya in 2011—an intervention which relied upon the same Muslim Brotherhood-backed proxies linked to Alwani. Managing Editor Robin Blackburn  is a former editor for Stratfor, a private intelligence firm known as the “Shadow CIA.”

“The head of the Newsline Institute is a former advisor to the U.S. African Command.”

Whether it is the tens of millions of dollars that the National Endowment for Democracy (NED) has poured into the World Uyghur Congress  or the unknown sums flowing from military contractors  to the coffers of the Australian Strategic Policy Institute (ASPI), it is clear that the sources peddling humanitarian interventionist narratives in the U.S. corporate media are far from trusty worthy. This hasn’t stopped the Joe Biden administration from endorsing the “genocide” narrative for the purposes of rebranding the New Cold War.

While some believed Biden would reduce tensions with China, the temperature of the New Cold War has risen in recent weeks following the latest militarist maneuvers of new administration. Earlier this month, 27.4 billion USD was requested by the U.S. Indo-Pacific Command for an “anti-China missile network”  that would run along key islands on China’s border such as Okinawa, Taiwan, and the Philippines. Biden joined the anti-China “Quad” alliance of Japan, India, and Australia on March 12th for the first international summit of his tenure as U.S. president. The alliance was given new life under the Trump administration after more than a decade of inactivity. That Biden would choose the “Quad” as his first summit  sends a clear message that the U.S.-led New Cold War on China will continue under the pretext of strengthening alliances and addressing “humanitarian” concerns.

“The temperature of the New Cold War has risen following the latest militarist maneuvers of new administration.”

Humanitarian interventionism renders the U.S. empire’s maneuvers mundane to the passive observer. The truth, however, is that humanitarian interventionism masks the actual war crimes committed by the United States and its imperial lackies. Repeated claims of “genocide” in China or “chemical weapons” in Syria are held to a far higher level of import than the verifiable genocide being committed against the Palestinians by the U.S.’s top ally in Israel or the tens of thousands of Venezuelans who have died  from the impact of U.S. sanctions. Not one minute in the U.S. press is spent on the millions of deaths produced from the quarter century-long invasion of the Democratic Republic of the Congo by U.S.-sponsored regimes in Rwanda and Uganda or the tens of millions dead or displaced in the aftermath of the U.S.-led invasions of Libya and Syria beginning in 2011.

It would still be too simple to characterize humanitarian interventionism as a mere cover for war crimes in service of U.S. hegemony. The mixture of humanitarianism with the act of war itself oozes of American exceptionalism. The U.S. empire is assumed to be the pinnacle of civilization in possession of a deep capacity to bring about enlightenment even through the most violent of methods. A common sense is developed where there is nothing in the empire’s track record, past or present, which can arouse scrutiny of its humanitarian ambitions. U.S. hegemony is neither desired nor opposed; it just is.

Behind the illusion of strength rests a foundation of systemic decay. Humanitarian interventionism not only rebrands war crimes as human rights operations but also erases the true motivations behind them. The U.S. has grown accustomed to pursuing humanitarian wars in moments when its interests are threatened. In 2014, Obama intensified U.S. support for violent rightwing opposition figures  and sanctions  against Venezuela once it became clear that the death of Hugo Chavez would not mark the end of the Bolivarian Revolution. The Syrian government has been accused multiple times of using chemical weapons on civilians  since 2016 despite being in the most favorable position to defeat U.S. and other foreign-backed proxies since the war began over a decade ago.

Enter China. China has contained the COVID-19 pandemic and is the only major economy posting positive growth amid a global depression. Furthermore, the instability that once wracked China’s Xinjiang Uygur Autonomous Region has ceased to exist thanks to the efforts of the government in curbing terrorism and alleviating poverty. Stability and growth have allowed China to move forward on its plans to develop a massive publicly financed global trade network through the Belt and Road Initiative .

Calls for humanitarian interventionism have grown louder as the U.S.’s decline continues to run parallel to China’s rise on the world stage. Whether the New Cold War turns into a hot war will not be determined by the U.S.’s restraint in the realm of politics. History has proven that the U.S. empire is built to destroy. Rather, the question of war and peace will be determined by how much grassroots opposition can be developed against the bogus humanitarian narratives driving the lust for U.S. interventionism in the 21st century.

Danny Haiphong is a contributing editor to Black Agenda Report and co-author of the book “American Exceptionalism and American Innocence: A People’s History of Fake News- From the Revolutionary War to the War on Terror.” Follow his work on Twitter @SpiritofHo and on YouTube as co-host with Margaret Kimberley of Black Agenda Report Present’s: The Left Lens. You can support Danny at www.patreon.com/dannyhaiphong