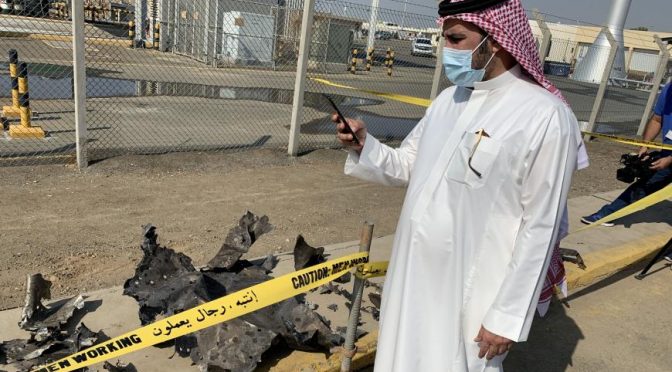 The Saudi rulers are facing a humiliating defeat as the Yemenis take revenge and Uncle Sam washes his hands of blood.

After six years of blowing up Yemen and blockading its southern neighbor, the Saudi rulers are now saying they are committed to finding peace. The move is less about genuine peace than economic survival for the oil kingdom.

The Saudi monarchy say they want “all guns to fall completely silent”. Washington, which has been a crucial enabler of the Saudi war on Yemen, has backed the latest “peace offer”. Secretary of State Antony Blinken this week endorsed the initiative from the Saudi rulers, saying he had spoken with them “on our work together to end the conflict in Yemen, facilitate humanitarian access and aid for the Yemeni people”.

The Saudi foreign ministry stated: “The initiative aims to end the human suffering of the brotherly Yemeni people, and affirms the kingdom’s support for efforts to reach a comprehensive political resolution.”

Can you believe this sickening duplicity from the Saudis and the Americans?

So, after six years of relentless aerial bombing in Yemen causing the world’s worst humanitarian crisis, according to the United Nations, the Saudis and their American military supplier, seem to have developed a conscience for peace and ending suffering.

The real reason for trying to end the conflict is the perilous state of the Saudi oil-dependent economy. Saudi Aramco, the state-owned oil, gas and petroleum industry, recently announced that its profits have slumped by nearly half in 2020 compared with the year before. Down from $88 billion to $49 billion.

Given that its oil economy provides nearly 90 per cent of state budget that is a stupendous hit on the Saudi finances. The Saudi rulers rely on hefty state subsidies to keep its 34 million population content. With income from the oil industry nosediving that means state deficits will explode to maintain public spending, or else risk social unrest from dire cutbacks.

Saudi Arabia remains the biggest oil exporter, but due to the Covid-19 pandemic and world economies going into recession crude oil prices have plummeted. At one point oil prices fell to around $20 a barrel. The Saudi economy needs an oil price of around $70 a barrel to reel in a profit.

The upshot is the Saudi war in Yemen has become a critical drain on state finances and potentially jeopardizing the superficial stability of the absolute monarchy.

Of further alarm is the increasing missile and drone attacks by the Houthi rebels in Yemen on key Saudi locations, including the capital Riyadh.

The Yemeni rebels are escalating airstrikes on Aramco installations at its headquarters in Dhahran and Dammam in Eastern Province, as well as in the cities of Abha, Azir, Jazan, and Ras Tanura. The targets include oil refineries and export terminals. The Saudis claim they have intercepted a lot of the missiles with U.S.-made Patriot defense systems. Nevertheless, the mere fact that the Yemenis can hit key parts of the Saudi oil economy over a distance of 1,000 kilometers is a grave security concern undermining investor confidence.

The first major strike was in September 2019 when Houthi drones hit the huge refinery complex at Abqaiq. That caused Saudi oil production to temporarily shut down by half. It also delayed an Initial Public Offering of Aramco shares on the stock market as investors took fright over political risk.

At a time when the Saudi oil economy is contracting severely due to worldwide circumstances, an additional debilitating threat is the intensifying campaign of Houthi airstrikes. They are taking the war into Saudi heartland.

The Biden administration has condemned the Houthi missile attacks on Saudi Arabia as “unacceptable”. Such American concern is derisory given how Washington has been providing warplanes, missiles and logistics for the Saudis to indiscriminately bomb Yemen causing tens of thousands of deaths. The Americans also enable the Saudis to impose a blockade on Yemen’s sea and airports, which has prevented vital food and medicines from being supplied to the country. Nearly 80 per cent of Yemen’s 30 million population are dependent on foreign aid deliveries. The blockade is a war crime, a crime against humanity, and the Americans are fully complicit.

President Joe Biden has said he is ending U.S. military support for Saudi Arabia’s war in Yemen. It was an election promise. However, it is not clear what military support the U.S. has actually stopped, if at all. The Saudi bombing of food depots continues and the blockade on the country could not be maintained without essential American logistics.

More cynically, the Biden administration realizes that the Saudis started a war back in March 2015, when Obama was president and Biden was vice-president, that has turned into an un-winnable quagmire whose horrendous human suffering has become a vile stain on America’s international image.

That’s why Biden and his diplomats have been urging the Saudi rulers to sue for peace. Now it seems the Saudi monarchy realizes that the reckless war launched by “defense minister” Crown Prince Mohammed bin Salman has come with a price that they can’t afford to sustain if they want to preserve their rickety house of cards, known as the House of Saud.

On the latest peace proposal, the Yemeni rebels have rejected it out of hand. They say it contains “nothing new”. The Houthis say the only way to end the war is for the Saudis and their American sponsors to end the aggression on their country. There is no “deal”. It is a case of the Saudis and the Americans just getting out.

Meantime, the airstrikes on Saudi oil infrastructure are going to continue with ever-increasing damage to the royal coffers. Thus, the Saudi rulers have no choice but to unconditionally surrender in this criminal war. They are facing a humiliating defeat as the Yemenis take revenge and Uncle Sam washes his hands of blood.