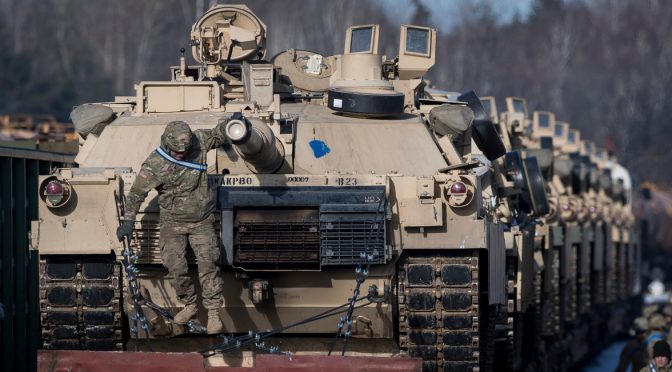 Twenty two Years Ago. 24 March 2021 marks the commemoration of the illegal US-NATO war of aggression against the Federal Republic of Yugoslavia which started in March 1999.

In a bitter irony, a few days prior to March 24th, reports confirmed that the US army and NATO are once again beating the drums of war near the Russian border as well as in and around Serbia (1).

One of the goals of the large-scale military manoeuvre  entitled “Defender Europe 21” is to move an entire US military division from the USA “to a potential battlefield in Europe” in peacetime.

The military training sites which are envisaged will be located in several NATO countries including Romania and Bulgaria, as well as in the US KFOR base Camp Bondsteel in Kosovo. In turn, Germany which is NATO member state will form a “central hub”.

“Defender-Europe 21 brings together some 30,000 soldiers from 27 states who are performing manoeuvres over a large territory. Most of the troops are from the US,” according to the Balkan Security Network.

“One of the goals of the exercise is to move squadron-sized units from stations in the US to a potential battlefield site in Europe. All of the countries in the region, except for Serbia, are taking part in the exercise, including the Kosovo Security Force,” it added.

The Balkans are the main area where the exercise is taking place, while training centres in the Baltic states and Germany will also be used.

Instead of apologising to the victims of the war crimes committed in 1999 and of the genocide knowingly and willingly brought about with uranium weapons, and instead of compensating them materially and providing them with medical support, a murderous military threat is once again being  built up and deployed against the two “‘brother countries” Russia and Serbia.

After the economy and infrastructure of Serbia were destroyed to a large extent in this 78-day war in 1999 and whole swathes of land were contaminated by the use of highly toxic and radioactive uranium weapons, years later multiple cancers, deformities in newborns and aggressive leukaemia in children increased by leaps and bounds.

In 2020, according to the medical platform “Izis”, there were tens of thousands of new malignant cases in Serbia.

However, due to the transformation of many hospitals into pure “corona outpatient clinics”, these cancer patients only come for urgently needed medical treatment in the final stage. There, they can then only be offered supportive therapy.

In this context, the question also arises as to what the Serbian government has done in the past decades to assist the citizens who have been permanently affected by the US-NATO war and to support the medical doctors, scientific experts and institutions who are sacrificially providing them with help in their time of need?

It is hoped that independent international experts will take up the issue without delay.

Dr. Rudolf Hänsel is a graduate psychologist and educationalist.