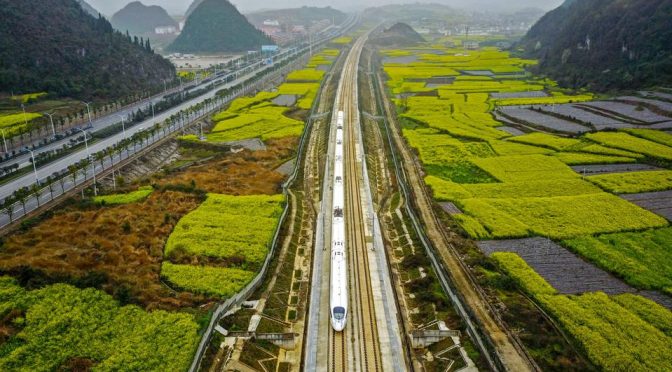 The extraordinary confluence between the signing of the Iran-China strategic partnership deal and the Ever Given saga in the Suez Canal is bound to spawn a renewed drive to the Belt and Road Initiative (BRI) and all interconnected corridors of Eurasia integration.

This is the most important geo-economic development in Southwest Asia in ages – even more crucial than the geopolitical and military support to Damascus by Russia since 2015.

Multiple overland railway corridors across Eurasia featuring cargo trains crammed with freight – the most iconic of which is arguably Chongqin-Duisburg – are a key plank of BRI. In a few years, this will all be conducted on high-speed rail.

The key overland corridor is Xinjiang-Kazakhstan – and then onwards to Russia and beyond; the other one traverses Central Asia and Iran, all the way to Turkey, the Balkans, and Eastern Europe. It may take time – in terms of volume – to compete with maritime routes, but the substantial reduction in shipping time is already propelling a massive cargo surge.

The Iran-China strategic connection is bound to accelerate all interconnected corridors leading to and crisscrossing Southwest Asia.

Informal conversations with Persian Gulf traders have revealed huge skepticism about the foremost reason for the Ever Given saga. Merchant marine pilots agree that winds in a desert storm were not enough to harass a state of the art mega-container ship equipped with very complex navigation systems. The pilot error scenario – induced or not – is being seriously considered.

Then there’s the predominant shoptalk: stalled Ever Given was Japanese owned, leased from Taiwan, UK-insured, with an all-Indian crew, transporting Chinese merchandise to Europe. No wonder cynics, addressing the whole episode, are asking, Cui Bono?

Persian Gulf traders, in hush hush mode, also drop hints about the project for Haifa to eventually become the main port in the region, in close cooperation with the Emirates via a railway to be built between Jabal Ali in Dubai to Haifa, bypassing Suez.

Back to facts on the ground, the most interesting short-term development is how Iran’s oil and gas may be shipped to Xinjiang via the Caspian Sea and Kazakhstan – using a to-be-built Trans-Caspian pipeline.

That falls right into classic BRI territory. Actually more than that, because Kazakhstan is a partner not only of BRI but also the Russia-led Eurasia Economic Union (EAEU).

From Beijing’s point of view, Iran is also absolutely essential for the development of a land corridor from the Persian Gulf to the Black Sea and further to Europe via the Danube.

It’s obviously no accident that the Hegemon is on high alert in all points of this trade corridor. “Maximum pressure” sanctions and hybrid war against Iran; an attempt to manipulate the Armenia-Azerbaijan war; the post-color revolution environment in both Georgia and Ukraine – which border the Black Sea; NATO’s overarching shadow over the Balkans; it’s all part of the plot.

Now get me some Lapis Lazuli

Another fascinating chapter of Iran-China concerns Afghanistan. According to Tehran sources, part of the strategic agreement deals with Iran’s area of influence in Afghanistan and the evolution of still another connectivity corridor all the way to Xinjiang.

And here we go back to the always intriguing Lapis Lazuli corridor – which was conceptualized in 2012, initially for increased connectivity between Afghanistan, Turkmenistan, Azerbaijan, Georgia and Turkey.

Lapis Lazuli, wonderfully evocative, harks back to the export of an array of semiprecious stones via the Ancient Silk Roads to the Caucasus, Russia, the Balkans and North Africa.

Now the Afghan government sees the ambitious 21st century remix as departing from Herat (a key area of Persian influence), continuing to the Caspian Sea port of Turkmenbashi in Turkmenistan, via a Trans-Caspian pipeline to Baku, onwards to Tblisi and the Georgian ports of Poti and Batumi in the Black Sea, and finally connected to Kars and Istanbul.

This is really serious business; a drive that may potentially link the Eastern Mediterranean to the Indian Ocean.

Since Russia, Iran, Azerbaijan, Kazakhstan and Turkmenistan signed the Convention on the Legal Status of the Caspian Sea in 2018, in the Kazakh port of Aktau, what’s interesting is that their major issues are now discussed at the Shanghai Cooperation Organization (SCO), where Russia and Kazakhstan are full members; Iran will soon be; Azerbaijan is a dialogue partner; and Turkmenistan is a permanent guest.

One of the key connectivity problems to be addressed is the viability of building a canal from the Caspian Sea to Iran’s shores in the Persian Gulf. That would cost at least US$7 billion. Another issue is the imperative transition towards container cargo transport in the Caspian. In SCO terms, that will increase Russian trade with India via Iran as well as offering an extra corridor for China trade with Europe.

With Azerbaijan prevailing over Armenia in the Nagorno-Karabakh flare up, while finally sealing a deal with Turkmenistan over their respective status in the Caspian Sea, impetus for the western part of Lapis Lazuli is now in the cards.

The eastern part is a much more complicated affair, involving an absolutely crucial issue now on the table not only for Beijing but for the SCO: the integration of Afghanistan to the China-Pakistan Economic Corridor (CPEC).

In late 2020, Afghanistan, Pakistan and Uzbekistan agreed to build what analyst Andrew Korybko delightfully described as the PAKAFUZ railway. PAKAFUZ will be a key step to expand CPEC to Central Asia, via Afghanistan. Russia is more than interested.

This can become a classic case of the evolving BRI-EAEU melting pot. Crunch time – serious decisions included – will happen this summer, when Uzbekistan plans to host a conference called “Central and South Asia: Regional Interconnectedness. Challenges and Opportunities”.

So everything will be proceeding interconnected: a Trans-Caspian link; the expansion of CPEC; Af-Pak connected to Central Asia; an extra Pakistan-Iran corridor (via Balochistan, including the finally possible conclusion of the IP gas pipeline) all the way to Azerbaijan and Turkey; China deeply involved in all these projects.

Beijing will be building roads and pipelines in Iran, including one to ship Iranian natural gas to Turkey. Iran-China, in terms of projected investment, is nearly ten times more ambitious than CPEC. Call it CIEC (China-Iran Economic Corridor).

In a nutshell: the Chinese and Persian civilization-states are on the road to emulate the very close relationship they enjoyed during the Silk Road-era Yuan dynasty in the 13th century.

An extra piece of the puzzle concerns how the International North-South Transportation Corridor (INSTC) will mix with BRI and the EAEU. Crucially, INSTC also happens to be an alternative to Suez.

Iran, Russia and India have been discussing the intricacies of this 7,200 km-long ship/rail/road trade corridor since 2002. INSTC technically starts in Mumbai and goes all the way via the Indian Ocean to Iran, the Caspian Sea, and then to Moscow. As a measure of its appeal, Azerbaijan, Armenia, Belarus, Kazakhstan, Tajikistan, Kyrgyzstan, Ukraine, Oman, and Syria are all INSTC members.

Much to the delight of Indian analysts, INSTC reduces transit time from West India to Western Russia from 40 to 20 days, while cutting costs by as much as 60%. It’s already operational – but not as a continuous, free flow sea and rail link.

New Delhi already spent $500 million on a crucial project: the expansion of Chabahar port in Iran, which was supposed to become its entry point for a made in India Silk Road to Afghanistan and onward to Central Asia. But then it all got derailed by New Delhi’s flirting with the losing Quad proposition.

India also invested $1.6 billion in a railway between Zahedan, the key city in southeast Iran, and the Hajigak iron/steel mining in central Afghanistan. This all falls into a possible Iran-India free trade agreement which is being negotiated since 2019 (for the moment, on stand-by). Iran and Russia already clinched a similar agreement. And India wants the same with the EAEU as a whole.

What Moscow is already seriously considering is to build a canal between the Caspian and the Sea of Azov, north of the Black Sea. Meanwhile, the already built Caspian port of Lagan is a certified game-changer.

Lagan directly connects with multiple BRI nodes. There’s rail connectivity to the Trans-Siberian all the way to China. Across the Caspian, connectivity includes Turkmenbashi in Turkmenistan and Baku in Azerbaijan, which is the starting point of the BTK railway through to the Black Sea and then all the way from Turkey to Europe.

On the Iranian stretch of the Caspian, Amirabad port links to the INSTC, Chabahar port and further on to India. It’s not an accident that several Iranian companies, as well China’s Poly Group and China Energy Engineering Group International want to invest in Lagan.

What we see in play here is Iran at the center of a maze progressively interconnected with Russia, China and Central Asia. When the Caspian Sea is finally linked to international waters, we will see a de facto alternative trade/transport corridor to Suez.

Post-Iran-China, it’s not far-fetched anymore to even consider the possible emergence in a not too distant future of a Himalaya Silk Road uniting BRICS members China and India (think, for instance, of the power of Himalayan ice converging into a shared Hydropower Tunnel).

As it stands, Russia is very much focused on limitless possibilities in Southwest Asia, as Foreign Minister Sergey Lavrov made it clear in the 10th Middle East conference at the Valdai club. The Hegemon’s treats on multiple fronts – Ukraine, Belarus, Syria, Nord Stream 2 – pale in comparison.

The new architecture of 21st century geopolitics is already taking shape, with China providing multiple trade corridors for non-stop economic development while Russia is the reliable provider of energy and security goods, as well as the conceptualizer of a Greater Eurasia home, with “strategic partnership” Sino/Russian diplomacy playing the very long game.

Southwest Asia and Greater Eurasia have already seen which way the (desert) winds are blowing. And soon will the masters of international capital. Russia, China, Iran, India, Central Asia, Vietnam, Indonesia, the Korean Peninsula, everyone will experience a capital surge – financial vultures included. Following the Greed is Good gospel, Eurasia is about to become the ultimate Greed frontier.

Pepe Escobar is a Brazilian journalist works as an often appears as a commentator on Russia’s RT and Iran’s Press TV. He writes regularly for Russia’s Sputnik News, and previously wrote many opinion pieces for Al Jazeera. Escobar has focused on Central Asia, Russia the Middle East, and Iran since the late 1990s.