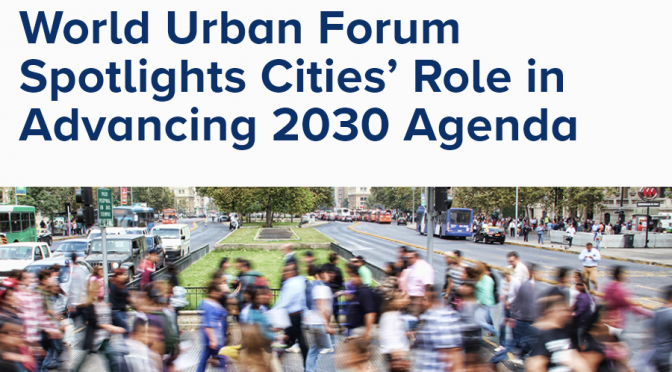 The master plan for all cities around the world, including those in the United States, is embodied in the UN’s 2030 Agenda, which officially states that the objective is to transform the world into Sustainable Development, aka Technocracy.

Participants at the tenth session of the World Urban Forum (WUF10) unpacked the theme of ‘Cities of Opportunities: Connecting Culture and Innovation.’

UN Secretary-General António Guterres said via video that urbanization continues to feature high rates of inequality, and called for all stakeholders, including local governments, to partner with the UN to tackle the climate emergency.

Ashraf Ghani, President of Afghanistan, said that organizational cultures in “communities of knowledge” constitute a significant constraint, suggesting that several international organizations are “still reflections of a different world.”

Fiji’s Prime Minister Frank Bainimarama emphasized the need to make urban living synonymous with sustainability. UN-Habitat Executive Director Maimunah Mohd Sharif noted that “SDG 11 is where all of the SDGs come together,” and called for turning urbanization into a net positive contributor to life on Earth.

More than 18,000 participants registered for the Forum, which began with five Assembly meetings of the UN Human Settlements Programme (UN-Habitat) constituency groups that provided input to the Habitat III process, namely women, youth, grassroots, and the World Assembly for Local and Regional Government.

Among the initiatives launched and discussed during WUF10 were UN-Habitat’s launch of the ‘SDG Project Assessment Tool: an innovative tool for inclusive, sustainable and effective urban projects,’ as well as ‘RISE UP: resilient settlements for the urban poor,’ which seeks to mobilize and coordinate large-scale investments in climate change adaptation and resilience for the urban poor.

Penny Abeywardena, Mayor’s Office of International Affairs, New York City, US, issued a call for local and regional governments to sign the Voluntary Local Review Declaration, noting that 20 new cities had already done so at WUF10.

Examples from countries and local communities discussed during WUF10 included the following:

At the close of WUF10, delegates adopted the Abu Dhabi Declared Actions, the main outcome document of the meeting. The document presents participants’ perspectives on the relationship between culture, innovation, and urban development.

In the Declared Actions, participants highlight that: culture is fundamental to identity and heritage, and is an integral part of the solution to the challenges of urbanization; cities are the incubators of social, economic, environmental, political and cultural progress; linking data, innovation and advances in science and technology with policy is critical for implementing the 2015 New Urban Agenda (NUA) and achieving the SDGs; and further action and commitments by actors at the local, national and global levels are welcomed in support of the NUA and 2030 Agenda for Sustainable Development.

In closing remarks, UN General Assembly (UNGA) President Tijjani Muhammad-Bande commended WUF10 for marking one of the first events of the UN Decade of Action. He described culture and innovation as key for promoting socially cohesive, peaceful and resilient societies, noting that culture plays a critical role in fostering human rights and peaceful coexistence.

He described the NUA as one of the most important blueprints to achieving sustainable cities, and called for innovation to become more climate resilient and better prepared for disaster recovery and risk reduction.

The language has always been deceptive as it always involves the people forking for the effort for proposed non-solution innovations, while real technologies that solve the already identified, and well defined, problems for good sat there in corporate shelves for decades.

When an organization’s long term goals are all premised with false narratives and false science like climate change, or global warming caused by carbon emissions, and they have a record of managing multiple simultaneous wars instead of preventing, or ending, all of them for good, you can bet your mother’s kitchen that they’re not for the good of the majority of the people, but only for those who are now controlling the institutions, governments, and industries.

The full participation of our elected governments to the COVID19 lockdowns and mass vaccinations, that are now being used to implement the planned AI-based control grid all necessitate that the awakened people of the world need to take actions before the next generation suffers from our continuing collective apathy.

Do you still think whether the United Nations is the World Government and its Agenda 2030 of sustainability of the global elite’s privileged position a conspiracy theory?