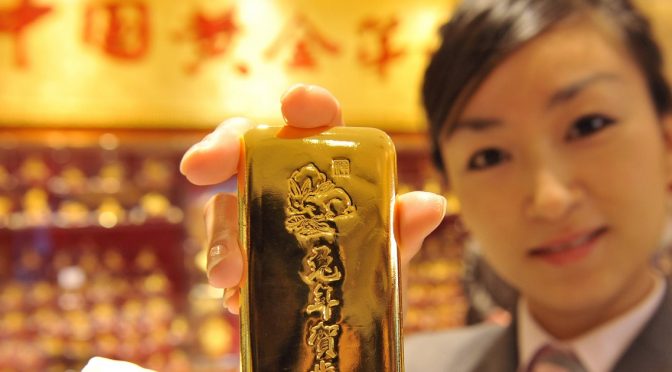 In 2018, the Chinese launched a gold-backed, yuan-denominated oil futures contract.  These contracts were priced in yuan, but convertible to gold, raising the prospect that “the rise of the petroyuan could be the death blow for the dollar.”

Two weeks ago, The IMF reported that the global share of US-dollar-denominated exchange reserves dropped to 59.0% in the fourth quarter, according to the IMF’s COFER data released today. This matched the 25-year low of 1995.

And just last week, China became the first major economy to unleash a Central Bank Digital Currency, “cementing its trailblazer status in virtual currencies far ahead of other countries, after already recently experimenting with large-scale trials of actual payments by consumers, which was met with mixed results.”

Also last week, Peter Thiel warned “Bitcoin should also be thought [of] in part as a Chinese financial weapon against the US… It threatens fiat money, but it especially threatens the U.S. dollar.”

All of which sets the stage for the dramatic headlines that hit this morning, as Reuters reports that China has given domestic and international banks permission to import large amounts of gold into the country,

The People’s Bank of China (PBOC), the nation’s central bank, controls how much gold enters China through a system of quotas given to commercial banks. It usually allows enough metal in to satisfy local demand but sometimes restricts the flow.

In recent weeks it has given permission for large amounts of bullion to enter, the sources said.

“We had no quotas for a while. Now we are getting them … the most since 2019,” said a source at one of the banks moving gold into China.

Around 150 tonnes of gold worth $8.5 billion at current prices is likely to be shipped, four sources said. Two of the sources said the bullion would be shipped in April. Two others said it would reach China over April and May.

The size of the shipments signals China’s dramatic return to the global bullion market. Since February 2020, the country has on average imported gold worth around $600 million a month, or roughly 10 tonnes, Chinese customs data show.

…and paving the way for a gold-backed yuan?

As Alasdair Macleod wrote last year, China can escape the fate of a dollar collapse by tying the yuan to gold.  Of all the major economies, China’s is best placed to implement a sound money solution.

With all its gold, by monetising it China could kill off the dollar tomorrow. Undoubtedly, this financially nuclear option has become a backdrop to her strategy in the ongoing trade and financial war against America. But the idea that by using this undoubted power over the dollar China gains a simple victory if through her actions the dollar is destroyed understates a more complex situation. It is not in China’s interest on many levels, not least because of her ownership of dollars is about $3.4 trillion, of which only $1.5 trillion is invested in Treasuries, agency, corporate and short-term debt in the US. The balance is actively used in loan finance to China’s commodity suppliers, those involved with the belt and road initiatives and other states with which China desires to gain influence.

Destroy the dollar and China’s heft around the world is destroyed as well, because only a small proportion of China’s loan-influence is in renminbi. In that sense, if the dollar collapses America gains a geopolitical benefit over China, her means of international influence being crippled. The Chinese leadership will be acutely aware of the consequences of the dollar’s demise and therefore will do nothing to encourage it. Indeed, if the dollar begins its collapse in the foreign exchanges, we could find China increasingly calling out the Fed on its inflationary policies. But then the Fed’s problem is and will continue to be an inability to stop its addiction to unlimited inflationism.

Unfortunately, a banking crisis is embedded in the script, which will have fundamental effects on all fiat currencies, some more than others. And since international banking is overwhelmingly a dollar affair, after a short pause the consequences are bound to weigh heavily upon it as the reserve currency. This credit cycle unwind is a Category 5 compared with 2008—09’s Category 2 or 3. It is only after such a cataclysm that China will have no alternative to abandoning all attempts to support the dollar and its means of buying overseas influence. China will then need to secure its own currency.

It will require a return to gold backing — the nuclear option so far avoided. While the cost will be writing off trillions of dollars and its means of securing overseas influence, there will be a monetary vacuum to fill. And compensation will be found in an increase in the value of China’s declared and undeclared bullion stocks, as well as the enrichment of its gold-holding people.

It is clearly not in China’s current geopolitical interest to introduce a gold standard that undermines or destroys the dollar. For this reason, China will only do so once it is clear that the dollar is in the early stages of an unavoidable inflationary collapse, and the risk of the yuan going down with it must be urgently addressed. Perhaps, as the Biden/MMT agenda becomes clearer, a reappraisal of the dollar’s prospects and the debt trap of rising interest rates being sprung on western governments is likely to determine timing.

Maybe the digitization of the yuan is the ‘control’ China needs to enable this transition?

There can be little doubt that a move to a gold yuan will have a profound effect on remaining fiat currencies. A short period of time between announcing these plans and their implementation will be required for markets to adjust. It is likely that fiat currencies would face downward pressure on their purchasing power, and China must be seen to be protecting her own interests by returning to sound money and not deliberately undermining the dollar.

Other nations, particularly those in Asia, are likely to follow China in implementing their own gold exchange standards, and all nations will be then faced with a stark choice: do they hang on to their welfare states and their growing difficulties in financing them, or do they stabilise their currencies? If China does adopt a proper gold exchange standard, she would neutralise all America’s geopolitical power, whether America follows suit or not.

Perhaps Peter Thiel is right… and bitcoin is the trojan horse to attack the dollar and make way for a gold-backed yuan?