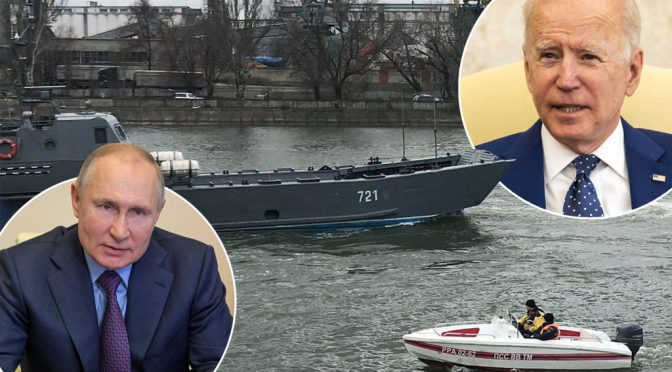 The stooge-President of Ukraine, Volodymyr Zelensky, appears to be trapped between what he has promised to do — which is for Ukraine to retake both Donbass and Crimea — and what will be within his power to do.

Ever since Joe Biden became America’s President in January, America’s hostile and threatening actions and rhetoric against (as Biden refers to him) the ‘killer’ Vladimir Putin, Russia’s President, have made clear to Putin that the U.S.

Government’s determination to impose regime-change upon Russia will continue undiminished. This hostility from Biden has dashed Putin’s hope that the string of sanctions which the U.S. Government has constantly been adding to ever since President Obama started the anti-Russian sanctions in 2012, would end, or at least not continue to be added to, under Biden.

Perhaps the clincher, in Putin’s mind, was Biden’s appointment, on January 16th, of Victoria Nuland to the #2 spot in the U.S. State Department, where, during Obama’s Presidency, as a third-ranked official who reported directly to Obama (instead of to her nominal boss the Secretary of State), she had planned, and organized the bloody coup that installed a rabidly anti-Russian Government in Ukraine on Russia’s border.

This is as if during the Cold War the Soviet Union were to have perpetrated a bloody coup installing an anti-U.S. government in Mexico or in Canada (something that the U.S. Government would never have tolerated for even a moment — consider the Cuban Missile Crisis of 1962 as an example), and Putin now is making clear that he will not tolerate any further increases in America’s anti-Russian threats and aggressions. (In fact, Nuland also was one of the chief planners of America’s aggressions against Syria, which has long been an ally of Russia. The plans against both Ukraine and Syria were first being firmed-up under her during 2011.)

America’s meta-strategy, at least since 2006, has been to ‘win’ WWIII against Russia, whereas Russia has always remained with what had been the meta-strategy on both sides, of having nuclear weapons only in order to be able to deliver an annihilating retaliatory response if the opposite side blitz-attacks it with nuclear weapons. That previous (in the United States, but still current in Russia) meta-strategy is called “Mutually Assured Destruction,” or “M.A.D.” for short.

As I had headlined and documented on 3 May 2017, “America’s Top Scientists Confirm: U.S. Goal Now Is to Conquer Russia”. That article quoted America’s top experts on nuclear war as saying that America’s “boosting the overall killing power of existing U.S. ballistic missile forces by a factor of roughly three … creates exactly what one would expect to see if a nuclear-armed state were planning to have the capacity to fight and win a nuclear war by disarming enemies with a surprise first strike.”

This would nearly be sufficient superiority of U.S. forces to fulfill the plan which had been first described publicly in America’s two most prestigious international relations journals, as being a suitable replacement for “M.A.D.”: “Nuclear Primacy”. That’s the goal for America to blitz-nuclear attack Russia so quickly that Russia won’t have enough time to launch a retaliatory response. America’s Establishment wants it to happen. (They are even buying luxurious deep-underground nuclear-bomb-proof shelters so that they will be among the few survivors from it.)

Putin is now taking the situation to be so dangerous for Russia so that he has publicly established “red lines” in U.S. policies, which, if crossed by the United States or its allies, might be responded to by Russia’s being the first to strike — the start of WWIII — even though that would destroy the entire world, including Russia itself.

Though he takes a great risk with these “red lines,” he seems to believe that by establishing them, there is less of a risk to Russians than if he continues to pretend that M.A.D. remains as being American policy. He is, in effect, forcing Joe Biden to choose now, between Nuclear Primacy versus M.A.D. Putin is now publicly warning the U.S. Government and America’s allies what could possibly be responded to by Russia’s blitz-attacking them. That’s what this new Russian policy is all about: pre-announced red lines.

The biggest hot spot, where a world-destroying nuclear war is the likeliest to be sparked, is in Ukraine, after Barack Obama’s February 2014 coup in Ukraine (on Russia’s border) which coup illegally and violently overthrew Ukraine’s democratically elected President and replaced him by a racist-fascist (or nazi) anti-Russian regime that promptly began an ethnic cleansing operation in its far south and far east in order to eliminate voters who had (in the far east, the Donbass region) voted 90%+ for him, and (in the far south, including Crimea) voted 75%+ for him. (Only by eliminating those people could the Obama-imposed regime remain in power after an election.) Obama had started planning this operation in 2011, and by the time of June 2013 a part of this plan was for America to replace Russia’s largest naval base, which was (and remains) in Crimea, by establishing yet another U.S. naval base there. (Putin — with the strong backing of the Crimean people — blocked that part of Obama’s plan.)

On April 15th, the U.S. regime’s Associated Press (AP) propaganda agency headlined a thousand-word “EXPLAINER: What’s behind the conflict in eastern Ukraine?” and devoted one section of it to “WHAT ARE THE ROOTS OF THE CONFLICT?” and another section to “WHAT’S THE U.S. ROLE?”, but nowhere in it was anything that has just been documentedhere, via the links, to be true, was even so much as just mentioned, in that entire article.

Here are headlines from April 17th regarding Ukraine:

“Ukraine’s military chief urges authorities to refrain from creating armed formations”: This reports an announcement by Ukraine’s Government telling its independently organized volunteer nazi battalions: please do not invade Donbass unless and until authorized to do so. Those battalions had previously been given to understand that they would soon be authorized to invade. The Ukrainian General is here telling those battalions that premature actions on their part might be exploited by Russia for its purposes (for Russian propaganda). This plea to those far-right mercenaries can only be very disappointing to them. Both of Ukraine’s two nazi Parties, Svoboda (originally the Social Nationalist Party of Ukraine), and Right Sector (meaning “Right Wing” in the extreme senses), are on the front lines there, and have publicly threatened to overthrow Ukraine’s current President if he fails to invade Donbas soon. Those mercenaries could quickly turn against him.

“Russia Shuts Ukraine’s Military Access To [the Sea of Azov]”: Beginning “next week,” and continuing at least until October, Russia will prevent any military vessels of or allied with the United States from passing through the Kerch Strait, which transits from the Black Sea, into the Sea of Azov, which latter is Ukraine’s sole coastal waters. (That U.S.-written headline erroneously said “Russia Shuts Ukraine’s Military Access To Black Sea,” because confusing the Black Sea with the Sea of Azov is common. However, that news-report provided an excellent map which shows what the article was actually reporting: Russia will close off U.S.-and-allied warship-access to Ukraine’s coast.) The implication of this news-report is that until (at least) October, Ukraine must avoid invading Donbas, or else do it without being able to be militarily resupplied by the U.S. and its allies.

“FAA issues warning for flights in Russia-Ukraine border airspace”: This is a warning to airlines to avoid that area because of the possibility of war breaking out imminently there (warning them to avoid events like the 17 July 2014 MH17 incident).

In other words: Putin is finally putting his foot down. He won’t tolerate any more of what Obama and Trump were dishing out.

On April 15th a headline was “U.S. drops plans to send destroyers into the Black Sea due to concerns over Russia”. This is one of several strong signs that Biden understands that crossing one of Putin’s red lines would be extremely dangerous.

The stooge-President of Ukraine, Volodymyr Zelensky, appears to be trapped between what he has promised to do — which is for Ukraine to retake both Donbass and Crimea (the same thing that his predecessor Petro Poroshenko had promised) — and what will be within his power to do. Even the U.S. empire, which had placed him (and Poroshenko — and Poroshenko’s predecessor “Yats” Yatsenyuk) into nominal control over that country, won’t actually risk WWIII in order to keep him in power there. At the present point in time, the best that Zelensky can reasonably hope for is to survive beyond his clearly doomed Presidency. He is learning that being a stooge is not a comfortable position to occupy.