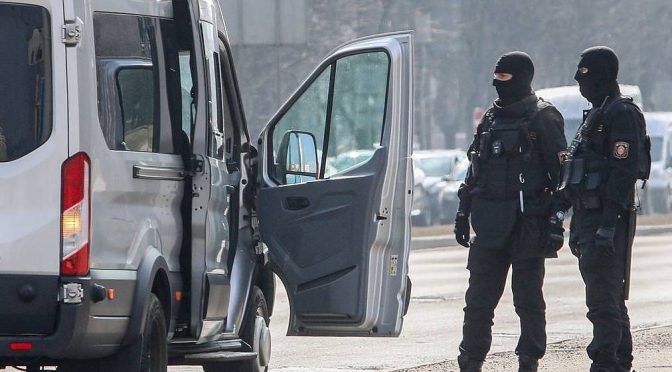 Belarus is much closer to Moscow than Ukraine, so that its capture by US-funded terror groups is grossly detrimental to Russian Federation’s security.

The latest regime change attempt by way of assassinating its president came in mid-March this year, and was thwarted with the assistance of the KGB based in the country.

On March 18, Ivan Tertel, the Belarusian KGB chief, reported that a coup attempt by a terrorism-related organized group, which plotted the killing of President Alexander Lukashenko and his family and an armed uprising to seize power, had been thwarted.

According to the investigators, the plot was conspired by dual Belarusian-American citizen Yuri Zenkovich, who has lived in the United States since 2007. He was detained in Moscow along with Belarusian nationals Alexander Feduta, a political analyst, and Grigory Kostusev, a leader of the Belarusian People’s Front opposition party.

According to Belarusian investigators, the coup plot was financed from abroad and the conspirators maintained close contacts with terrorist organizations. Overall, no less than three scenarios to seize power in the republic were planned. Later, the KGB said that four individuals were charged with conspiracy to seize power.

On April 17, Lukashenko announced that the trio planned an assassination of him and his family.

MINSK, April 28. /TASS/. The suspects, charged with preparation of a coup in Belarus and assassination of President Alexandre Lukashenko, acknowledged their conspiracy. They said it in the documentary titled “To kill the president,” aired on Belarusian TV Wednesday.

“We had three goals to achieve. The first one was elimination of the country’s direct leadership, by internment or physical elimination. The second goal was blocking of units that could put up resistance. The third goal was to capture symbolic objects of the city,” says lawyer Yury Zenkovich, one of the suspects.

“I plead guilty of effectively being used as a technical organizer,” he said. The BNF political party leader Grigory Kostusev also pleaded guilty of “allowing such people to pull [him] into this kind of talk.”

“It was a crime for me already that I was pulled into this talk [about the coup],” Kostusev said.

Political researcher Alexander Feduta disclosed that the question of capturing of a number of state structures was indeed discussed.

“First and foremost, the media, certain communications nodes, and possibly, a temporary shutdown of the Internet. I plead guilty of taking part in the conspiracy,” Feduta said.

On April 17, Lukashenko announced that the trio planned an assassination of himself and his family. He pinned the responsibility on US intelligence services and leadership. According to Belarusian investigators, the coup attempt was funded from abroad, and the conspirators stayed in close contact with terror groups.

The conspirators developed no less than three different plans to seize the power. Belarusian State Security Committee (KGB) charged four people of conspiracy to seize power in an unconstitutional way. The Committee disclosed that all suspects testify and cooperate with the investigation. The KGB has not disclosed the name of the fourth suspect so far. – TASS