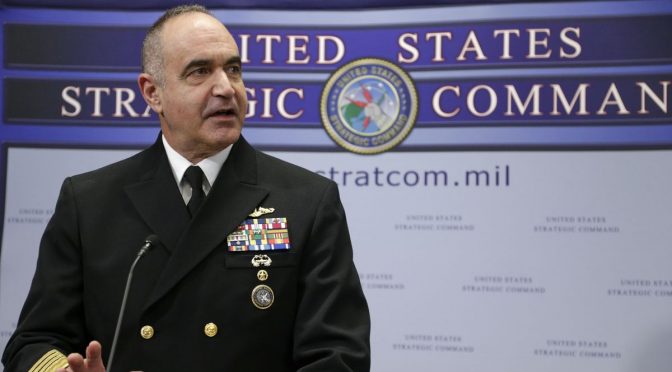 On April 29 Tom Engelhardt, a respected commentator on world affairs, published a piece examining America’s everlasting wars and concluded “The question that Americans seldom even think to ask is this: What if the U.S. were to begin to dismantle its empire of bases, repurpose so many of those militarized taxpayer dollars to our domestic needs, abandon this

country’s focus on permanent war, and forsake the Pentagon as our holy church? What if, even briefly, the wars, conflicts, plots, killings, drone assassinations, all of it stopped? What would our world actually be like if you simply declared peace and came home?”

As he well knows, the answer is that the world would be a better, safer and much more attractive place in which to live. But, as he laments, there seems to be little chance of that happening, because there will be no change of mind or policy on the part of the Military-Industrial Complex that spreads its wings from Washington to the furthest part of the United States, the country that could lead the world in pursuit of peace.

We are all concerned about climate change because it is having such an adverse impact on people in so many countries and is likely to continue to be the greatest threat to global stability — apart from the other change that is firmly under control of the movers and shakers in Washington’s corridors of power.

The ultimate threat to our very existence is that of nuclear war, and instead of trying to bend their undoubtedly gifted minds to devising means to reduce that menace, the Pentagon’s planners and pushers, aided to the hilt by politicians and others with financial interests in weapons’ production, are intent on extending America’s nuclear clout around the world and into space.

The U.S. military’s Strategic Command (STRATCOM) describes itself as a “global warfighting combatant command” which “delivers a dominant strategic force and innovative team to maintain our Nation’s enduring strength, prevent and prevail in great power conflict, and grow the intellectual capital to forge 21st century strategic deterrence.” Given this Mission, STRATCOM considers itself to be the “ultimate guarantor of national and allied security” and is ready at a moment’s notice to deliver a “decisive response” which means it is ready to destroy the world with nuclear weapons.

The head of this organisation, Admiral Charles Richard, addressed the Senate Armed Forces Committee on April 20 and among other things declared that “While China’s nuclear stockpile is currently smaller (but undergoing an unprecedented expansion) than those fielded by Russia and the United States, the size of a nation’s weapons stockpile is a crude measure of its overall strategic capability.” No doubt this caused as much mirth in Beijing as in many other world capitals, but the fact remains that he did not publicly state the quantities of weapons held by China and the U.S. — most likely because the disparity is so palpable as to be ludicrous.

According to the Stockholm International Peace Research Institute (whose information can be trusted) the U.S. has a total of 5,800 nuclear weapons, of which 1,750 are deployed. These are, therefore, ready for instant use, at a moment’s notice. (The others are “stored or reserve warheads and retired warheads awaiting dismantlement.”)

On the other hand, China has 320 nuclear weapons and, as SIPRI notes, “is in the middle of a significant modernization of its nuclear arsenal. It is developing a so-called nuclear triad for the first time, made up of new land- and sea-based missiles and nuclear-capable aircraft.”

Admiral Richard, the director of Washington’s long-existing nuclear triad, considers China’s development of a nuclear force to be unwarranted and deplorable. He announced to the Committee that “China is rapidly improving its strategic nuclear capability and capacity, with rapid growth in road mobile production, doubling the numbers of launchers in some ICBM brigades, deployment of solid fuel intercontinental ballistic missile (ICBM) silos on a potentially large-scale, an added air leg, and are well ahead of the pace necessary to double their nuclear stockpile by the end of the decade.” [Emphasis added.]

If its nuclear holding is doubled in the next ten years this will mean that China may then have one third as many nuclear weapons as the United States. Furthermore, Admiral Richard protested, all this is taking place “behind a complete lack of transparency” which is regarded as reprehensible and indeed unacceptable. It doesn’t matter that the United States, as stated by SIPRI, has “ended the practice of publicly disclosing the size of the U.S. stockpile”, but it is expected that all other nations should be absolutely transparent about their nuclear programmes. (Like Israel, perhaps?)

There is, however, one aspect of nuclear policy on which Washington is transparent, and this was made clear when President Biden met with Japanese Prime Minister Yoshihide Suga in the White House on April 16. Their joint statement was titled U.S.-Japan Global Partnership for a New Era and is to date the most significant indication that Biden has decisively endorsed Washington’s long-standing readiness to engage in nuclear war. This chilling document gives no indication that there can ever be possibility of compromise with China on any matter and is confrontational to the ultimate degree concerning what both Biden and Suga know very well is a cornerstone of China’s international policy : its assertion of sovereignty over islands in the South China Sea.

The position of the U.S. in regard to the South China Sea is repeatedly stated by Washington to be based on international law, and the Biden-Suga pronouncement of confrontation with China emphasises agreement to “promote shared norms in the maritime domain, including freedom of navigation and overflight, as enshrined in the UN Convention on the Law of the Sea (UNCLOS)” This might be worth heeding were it not for the fact that the United States of America has refused to ratify UNCLOS, along with such states as Iran, Israel, Syria, North Korea and Libya. Biden is ordering other nations to conduct their maritime affairs in accordance with an important international accord that Washington has rejected.

It would be an absurd and laughable situation were it not for the fact that Biden has stated he will commit the U.S. to war in support of Japan, and that by definition, UNCLOS could be used as justification for that war. Biden declared his “ironclad support for U.S./Japanese Alliance, and for our shared security” and specifically that Washington and Tokyo are “committed to working together to take on the challenges from China and issues like the East China Sea, the South China Sea, as well as North Korea.” The crunch came in the joint statement’s notification of Washington’s “unwavering support for Japan’s defence under the U.S.-Japan Treaty of Mutual Cooperation and Security, using its full range of capabilities, including nuclear.” The throwaway words are “including nuclear.”

The ultimate sword has been brandished. On April 16 the U.S. president issued a plain unveiled threat to use nuclear weapons against China and four days later the head of Strategic Command insisted to the Senate that it must approve the 95 billion dollar expenditure on the new “Ground Based Strategic Deterrent” to replace the hundreds of Minuteman Intercontinental Ballistic Missiles that are on permanent alert to destroy cities in Russia and China.

It was not surprising to read a (semi-official) editorial in China’s Global Times observing that Washington and Tokyo “are attempting to make confrontation the main theme of the entire region.” This certainly seems to be the policy, and Washington’s emphasis on nuclear weapons has heated up the confrontation climate. We have been moved yet another step closer to planetary destruction.

Brian Cloughley is a British and Australian armies’ veteran, former deputy head of the UN military mission in Kashmir and Australian defense attaché in Pakistan.