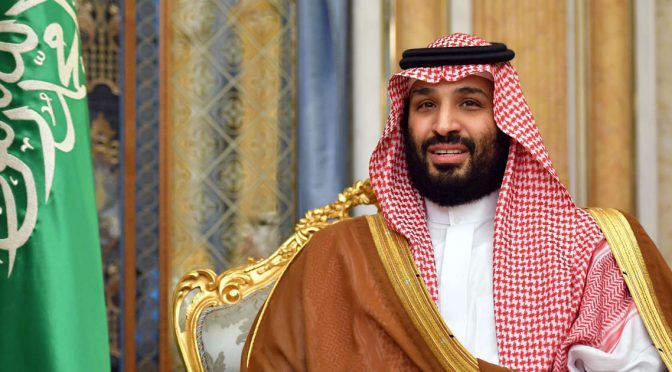 The Biden effect is shaking up the Middle East and forcing foes to talk to one another. But where it’s all heading is even more exciting for Saudi Arabia and Iran.

“In the end, Iran is a neighboring country, we want to have a good and distinguished relationship with Iran.”

“We do not want the situation in Iran to be difficult, on the contrary, we want a prosperous Iran… We have interests in it and it has interests in the Kingdom of Saudi Arabia to push the world and the region to prosperity.”

Unimaginable reconciliations are taking place across the entire region, since Joe Biden was sworn into office and indicated that he wasn’t going to tolerate regional leaders ‘behaving badly’ and the previous carte blanche from the White House which came with abhorrent human rights scandals.

The Khashoggi murder will not be swept under the carpet and forgotten. But then neither will the Trump-initiated border closure of Qatar with the rest of its GCC neighbours, or for that matter the phony crisis with Iran.

What else would you call the tensions between Saudi Arabia and Iran, in particular in the previous four years during the Trump administration? Saudi Arabia, along with the UAE and other GCC countries were expecting a second Trump term where what was hoped to be Iran being forced to withdraw its financial aid to Hezbollah or the Houthis in Yemen didn’t happen, when Biden took office. Qatar being alienated even more and MBS getting off scot free, not to mention the war in Yemen raging on, have all also been marked up as ‘non-starters’ by Biden from the off as he has put precedence on MBS himself over the Iran deal.

And it is working.

The cavalier young Saudi Prince’s actions in recent weeks have taken everyone by surprise as he has boldly taken it upon himself to build bridges with Qatar, bring Turkey completely in from the cold and – amazingly – agree to talks brokered by Iraq aimed at sketching out a peace treaty of sorts, based on the same premise of how the EU was formed at the end of the second world war: if you have shared interest with a neighbour, it makes it much harder for either party to go to war.

Saudi Arabia is looking at ways how it could cooperate with its arch foe Iran and is keen to be part of the new ‘Iran Deal’ talks in Vienna where there is an impetus on any new deal extending beyond uranium enrichment but also regional cooperation.

No matter what you might think about MBS, this turnaround shows two things: the young crown prince is capable of doing Mea Culpa. And he also a deft political thinker.

Or, put differently, he is learning fast. For a peace deal of sorts to be hammered out with Iran under the umbrella of Biden-initiated Iran talks, MBS is set to clean up. He could not only win even more political support both at home and abroad, but might catapult himself closer to the ambitious plans he has of economically reforming his country with a grandiose foreign investment scheme including a new ‘Dubai’ type Las Vegas in the desert. 2030 suddenly looks more than just a number.

In moving so quickly to clean up his back yard, it will be hard for Biden to keep playing the Khashoggi card and we could see a more dynamic, bigger relationship between Washington and its EU partners and Saudi Arabia – which goes beyond pumped-up defence procurement and energy dependency. The relationship is set for a reboot and the talks in Iraq now may well be a boost for the Iran deal coming off as there are indicators that the Iranians are ready to build a more sensible relationship with their neighbours in exchange for sanctions being busted and them being allowed to sell their oil on the world market.

Of course, the U.S. pays a very heavy price in the short term in this. Part of the Trump doctrine was always to lead the Saudis and their neighbours away from a model of governance and more bent on being cruel dictatorships which could fool their own people that such behaviour was all about defending oneself from a powerful enemy which has its missiles pointed at you. Forcing the Saudis to talk to the Iranians debunks this old myth that there really was a threat in the first place as enemies red in tooth and claw don’t scramble so quickly to the teak tables of diplomacy and talk about cooperation with such zeal when the air is thick with hatred and revenge. But perhaps more importantly it also dispatches into the long grass the need for such absurd defence spending, which is of course linked to western leaders scare-mongering their hosts about the so-called threat, while providing the solution on the same white marker board.

Does Riyadh really need to spend such obscene amounts of money on U.S. hardware to protect itself when, as we saw in the oil field missile attacks last year, it often doesn’t even work in the first place. And secondly, the spending is counterproductive, both on how much it keeps the rancid atmosphere of impending war but also how it prevents the incumbent from thinking about adopting a governance model.

If the talks in Iraq lead to the arms race being wound down and the same amounts of money can be put into investment, start-ups, research and renewable energy, then just think of the capabilities of what KSA could do in the region and its own young people who look to MBS as a modern-day saviour. The crown prince is looking forward and not looking back at what has passed and for this, western media should cut him some slack and acknowledge his achievements as the early steps of at least opening the doors to governance – as opposed to rule – are shaping up.

Martin Jay is an award-winning British journalist based in Morocco where he is a correspondent for The Daily Mail (UK) who previously reported on the Arab Spring there for CNN, as well as Euronews. From 2012 to 2019 he was based in Beirut where he worked for a number of international media titles including BBC, Al Jazeera, RT, DW, as well as reporting on a freelance basis for the UK’s Daily Mail, The Sunday Times plus TRT World.