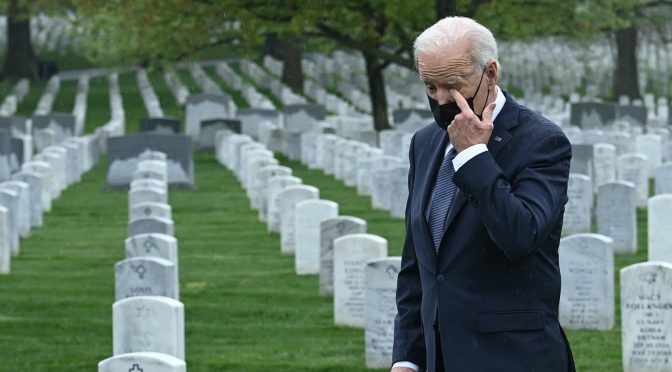 As the divide now separating the Democrats and Republicans threatens to turn into a yawning, abyss, the future does not bode well for the U.S.

In an open letter signed by some 124 retired U.S. general and admirals, President Joe Biden is taken to task over a number of issues now dividing the nation, including critical race theory, the border wall, relations with China, and the outcome of the 2020 presidential elections. Even the subject of the U.S. leader’s mental and physical condition is questioned.

Echoing a letter penned by a group of French soldiers who warned President Emmanuel Macron that the country was heading for civil war, the retired U.S. military leaders had a similar message for Joe Biden: “Our nation is in deep peril. We are in a fight for our survival as a Constitutional Republic like no other time since our founding in 1776. The conflict is between supporters of Socialism and Marxism vs. supporters of Constitutional freedom and liberty.”

Right out of the gates, the former military leaders questioned the legitimacy of the 2020 presidential election where Joe Biden, campaigning primarily from the basement of his home amid the Covid-19 pandemic, reportedly attracted more votes than any other presidential candidate in U.S. history to defeat the incumbent Donald Trump. Clearly this group does not buy that story.

“Without fair and honest elections that accurately reflect the ‘will of the people’ our Constitutional Republic is lost,” the representatives from the four branches of the military wrote. The letter went on the offensive against the Democrat Party, which has balked at taking measures to ensure the legitimacy of future elections – like restricting the use of mail-in voting, which the Republicans believe invites corruption – branding all such efforts as “racist” or “suppressing votes.”

“Using racial terms to suppress proof of eligibility is itself a tyrannical intimidation tactic,” the former military brass railed.

It should be mentioned that the Democrats and Republicans are currently fighting a pitched battle in Maricopa, Arizona, where the first of many audits are underway in an effort to legitimize the 2020 presidential election results. Strangely yet predictably, the Democrats have fought the audit efforts every step of the way, while the non-impartial mainstream media – aside from ridiculing the conservative efforts – show little interest in providing balanced coverage of the process. Naturally, such disdain for lending even a minimal amount of legitimacy to a fiercely contested election has incurred the wrath of exactly one half of the U.S. electorate, which includes the voices of these generals and admirals.

County supervisors are being called back to the Senate to answer questions in the audit subpoena fight. The county has refused to turn over routers, saying it would compromise sensitive law enforcement information and cripple county government. https://t.co/sDolRotRzR

The letter continued with a stinging rebuke of Biden’s “dictatorial manner,” on full display on inauguration day as Biden wasted no time signing “more than 50 Executive Orders… many reversing the previous Administration’s effective policies and regulations,” such as Trump’s wall building effort on the U.S.-Mexico border, and the elimination of ‘critical race theory’ teachings to government employees.

Apparently, the irony of Biden signing off on executive orders behind a ring of armored steel on Capitol Hill, and without a hint of congressional oversight, was lost on the administration, which is arguably unconscionable considering that the Democrats repeatedly referred to Trump as a “tyrant” and a “dictator” during his “reign.” Yet such ‘defensive’ measures were easily explained away following the so-called ‘insurrection’ that occurred on January 6, a day that will forever live in infamy in the United States, at least for the Democrats.

Frustration also appears to be mounting against the Biden administration’s approach to tackling the Covid pandemic, which, as the letter spells out, includes “population control actions” such as “excessive lockdowns” against schools and businesses, and “censorship of written and verbal expression.” All of these actions, the ex-military men say, represent “direct assaults on our fundamental Rights.” Their suggestion? What Republicans have been discussing forever, “removing Section 230 protection from big tech.”

What followed next is a bullet point list of eight specific grievances summed up briefly here. The generals and admirals addressed the “national security issues and actions,” that included illegals migrants “flooding our Country bringing high economic costs, crime, lowering wages, and illegal voting in some states; censoring speech and expression, spreading disinformation by government officials, private entities, and the media is a… tyrannical technique used in closed societies; stopping the Keystone Pipeline…causes us to be energy dependent on nations not friendly to us, while eliminating valuable U.S. jobs; forcing Politically Correct policies like the divisive critical race theory into the military at the expense of the War Fighting Mission, seriously degrades readiness to fight and win our Nation’s wars; anarchy as seen in certain cities cannot be tolerated; the mental and physical condition of the Commander in Chief.”

The letter concludes with a grim prediction as to where the former military leaders believe the nation, should it continue along its course, is heading: “Under a Democrat Congress and the Current Administration, our Country has taken a hard left turn toward Socialism and a Marxist form of tyrannical government which must be countered now by electing congressional and presidential candidates who will always act to defend our Constitutional Republic.

“The survival of our Nation and its cherished freedoms, liberty, and historic values are at stake.”

While it may be tempting to ignore the ramblings of these retirees, it is important to note that many of the signatories were military heavyweights, like Naval Commander John Poindexter and Army Brig. Gen. Don Bolduc, a possible contender in the 2022 Senate run. These men did not disappear from the military just to play golf upon retirement. In fact, now that these former general and admirals are legal ‘civilians’ once again, they are able to participate in partisan politics as they see fit.

Moreover, individuals with such high standing tend to keep in contact with their former peers. They have their finger on the pulse of the military and nation, so to speak, or at least a broad section of it. In other words, their warnings and fears, as laid out in the open letter, are most likely shared by hundreds if not thousands of active service men and women, as well as those of regular civilians.

As the divide now separating the Democrats and Republicans threatens to turn into a yawning, unabreachable abyss, with radical new issues never considered before entering the political stage, the future does not bode well for the United States and its political means for addressing them.