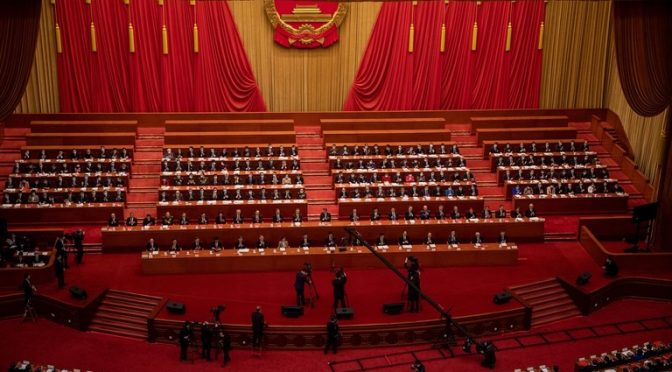 The days when the US and its allies could sanction those they dislike with impunity are over. A new “counter-sanctions” bill from Beijing sets the legal framework to hit them back hard where it hurts, financially and commercially.

On Thursday afternoon the Standing Committee of China’s National People’s Congress passed its new “counter-sanctions” bill, a piece of legislation which, as the name suggests, aims to codify China’s own countermeasures to Western-induced sanctions against its officials and companies, which have been growing in scope.

Although the specific details of the bill are yet to be released, it is known that impacted parties will be able to legally seek compensation. The legislation was originally prepared last year but put on hold in anticipation of what the Biden administration would do; it is now proceeding, as the new president has only served to continue with and expand on Trump’s tough stance against China.

China has, of course, already began to utilize its own measures in response to actions from the West, having responded to coordinated sanctions over Xinjiang in March by blacklisting a number of UK and EU institutions and representatives, as well as also having sanctioned swathes of former Trump administration officials, including Mike Pompeo, Matthew Pottinger, and Peter Navarro, days after they left office.

As described by experts, the new counter-sanctions bill is designed to attempt to legally codify China’s sanctions and to create a “toolbox” that will allow it to respond to the West in a defensive but more direct manner – yet what it will wholly consist of otherwise remains unclear.

What are sanctions? And how does one make them effective? In their raw form, sanctions are diplomatic measures taken by one country or a group of countries to impose their will on another, with a view towards a given goal or objective. Sanctions can be driven by self-interest, or as a form of punishment or leverage in order to make a given state comply with the ‘rules’ of the international order. As international attitudes towards war changed in the 20th century, sanctions became the ‘first resort’, the most acceptable tactic in international disputes.

In any context, the world knows the United States to be the world’s most industrial purveyor and distributor of international sanctions, utilizing its unrivalled dominance over the global financial system through the dollar to exclude countries and individuals who contravene its interests from worldwide banking.

In this case, sanctions are effective only to the scale of power and leverage which a country has to damage the interests of its target. If an American official was sanctioned tomorrow by, let’s say, a tiny country with no economic relevance whatsoever like San Marino, would it mean anything? Yet Washington has the power to deprive Chinese officials of bank accounts even in their own country.

This weakness is one reason Beijing has pushed through the counter-sanctions law. China may boast the world’s second-largest economy, but it has not accumulated the leverage to make its counter-sanctions felt beyond its own borders. Pompeo, for example, is banned from entering China, and he is banned from doing business with China, but this measure does not establish reciprocity to push back against America as a whole from placing more measures on Beijing, or make Washington ‘pay a price’. The bill endeavours to change that by legally codifying a process where its own economic strengths can indeed potentially cause damage to offending countries as a retaliation, aiming to weaponize China’s own enormous market as an instrument.

Despite geopolitical frictions, China’s own domestic market remains an immeasurable and essential avenue for global business. This is only accelerating, with a recent report finding (despite all the controversy over the EU-China Comprehensive Agreement on Investment, or CAI) that European firms are only set on expanding their presence in China, and not ‘decoupling’, as had been assumed.

It has subsequently been raised as a concern that the new ‘compensation’ dynamic of the counter-sanctions law will allow impacted Chinese parties to seek reparation from damages facilitated by Western sanctions. But the question is, compensation from who? We don’t know the answer yet, but it is to be assumed based on existing precedent that the countries and organisations involved may be targeted.

As a potential foreshadowing of this, earlier this year Chinese courts accepted lawsuits from Xinjiang companies against German scholar Adrian Zenz for fabricating ‘forced labour’ rumours, resulting in divestment from the cotton supply chain there.

The case has not yet concluded, but if the court subsequently rules a certain sum to be paid in damages, then one wonders where that is going to come from (given that Zenz has no assets there). This means any company or organisation affiliated with Zenz could become legally liable to paying the money if they have a presence in China, which thus adds ‘extra-territorial’ reciprocity to such sanctions.

As an additional example, the Western clothing chain H&M received a furious backlash in China for complying with the Xinjiang sanctions, and under the new law it could be forced to pay compensation. In that case, China’s own market power is transformed into a more ready sanctions tool which allows it to hit back against Western sanctions.

This is precisely what it is designed to be: a means of deterrence to make offending countries think twice and to reform the mindset that China can be punished akin to a smaller, subordinate country and somehow forced to comply. The West fiercely decries Chinese counter-sanctions, believing that its ‘right’ to impose them on Beijing works only one way, but international relations as a whole are about the dynamic of power, as opposed to an ideological question of right or wrong.