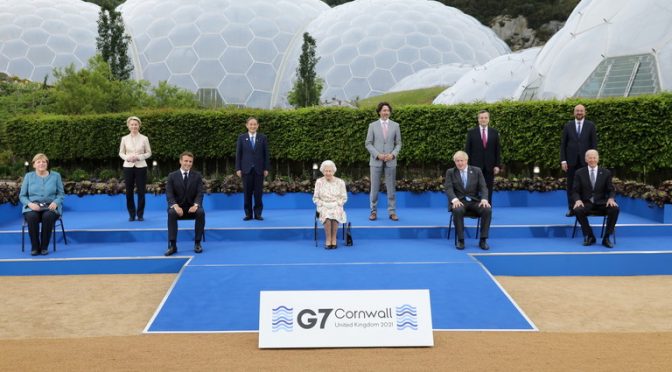 Beijing has dismissed the notion that G7 nations can chart the trajectory of global affairs, arguing that decision-making by small clubs has been replaced by genuine multilateralism.

Washington has described the Group of Seven summit in Cornwall, southwestern England, as an opportunity to reinforce the so-called “rules-based international system” – an assertion that China disputes.

“We always believe that countries, big or small, strong or weak, poor or rich, are equals, and that world affairs should be handled through consultation by all countries. The days when global decisions were dictated by a small group of countries are long gone,” a spokesman for the Chinese Embassy in London said on Saturday in response to the rhetoric coming from Cornwall.

The embassy noted that the only legitimate global “order” is based on UN-backed international law, and not the “so-called system and order advocated by a handful of countries.” Beijing supports “genuine multilateralism” based on the principles of equal treatment and cooperation, and rejects the “pseudo-multilateralism” which only serves the interests of a “small clique,” the spokesperson added.

The group of wealthy democracies have used the summit to target Chinese economic initiatives. On Saturday, the allies unveiled an infrastructure project, called “Build Back Better for the World,” which aims to compete with Beijing’s trillion-dollar Belt and Road transportation network. The group also discussed how it could reduce economic dependency on Beijing.

China has accused Washington of “fanning confrontation” by trying to rally G7 nations to form a united front against Beijing.

Attempts to “gang up” on Beijing will fail, the country’s Foreign Ministry said on Thursday, calling for a more “objective and rational” approach to international relations.

China has long maintained that Washington’s influence over global affairs is waning. China’s state-funded Global Times argued in an op-ed earlier this month that the world’s “economic and political center of gravity has shifted eastward,” noting that even European allies are gradually turning away from the US’ uncompromising stance on Beijing.

The Group of Seven (G7) countries have announced plans for a major infrastructure project for developing nations in a bid to rival China’s trillion-dollar Belt and Road Initiative (BRI), also known as “One Belt, One Road.”

The agreement on the initiative titled Build Back Better World (B3W) came on the second day of the Cornwall summit of the seven richest democracies carried out in southwestern England.

The vast project is aimed at providing a transparent infrastructure partnership to “help narrow the $40+ trillion infrastructure need in the developing world, which has been exacerbated by the COVID-19 pandemic,” according to a senior official in the US presidential administration.

“This is not just about confronting or taking on China,” the top official said. “But until now we haven’t offered a positive alternative that reflects our values, our standards and our way of doing business.”

According to German Chancellor Angela Merkel, the “important initiative” is much needed in Africa.

“We can’t sit back and say that China will do it but it’s the G7’s ambition to have a positive agenda for a number of countries in the world which are still lagging behind… I welcome it,” the German leader said.

It was not immediately disclosed how the project would be implemented or how much investment it would ultimately take. The G7 members also didn’t specify an implementation time.

China’s BRI, dubbed the 21st century Silk Road project, was announced by Chinese President Xi Jinping eight years ago. The major project involves development and investment initiatives that would stretch from Asia to Europe and beyond. Since then, Beijing has inked around 200 cooperation documents with 167 countries and international organizations.

The multi-trillion-dollar initiative aims to boost connectivity and cooperation between Asia, Europe, Africa, and Latin America. Experts say it will significantly boost global commerce, cutting trading costs by half for the countries involved.

The project has been sharply criticized by the US and EU officials as a vehicle for the expansion of Communist China with Beijing saying that those doubts betray the “imperial hangover” of many Western powers that humiliated China for centuries.