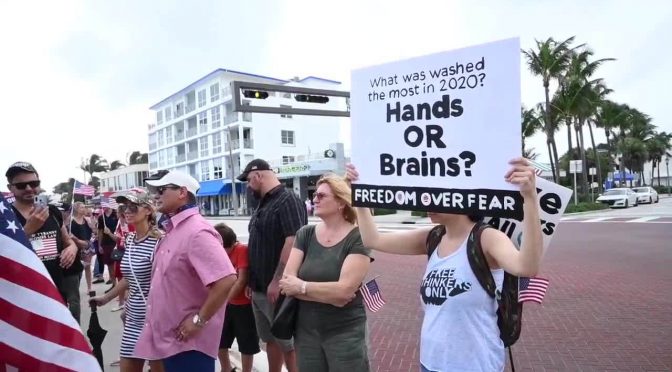 In April, I wrote a column outlining the constitutional violations of mask mandates and asking why the courts have failed to abide by the line of Supreme Court cases protecting the right to bodily integrity. Well, on Friday a Florida appeals court did exactly that, perhaps in more emphatic language than a Kentucky judge last week.

Although Florida has been largely free of state-based COVID restrictions and never had a mask mandate, several counties, such as Alachua, zealously instituted unconstitutional regulations until fairly recently. In a landmark ruling on Friday, Florida’s First District Court of Appeals ruled that a lower court had erred in tossing out the lawsuit against Alachua County’s mask mandate because it should be held as presumptively unconstitutional.

“Based on what the supreme court has told us about the scope of article I, section 23, Green (and anyone else in Alachua County) reasonably could expect autonomy over his body, including his face, which means that he was correct to claim an entitlement to be let alone and free from intrusion by Alachua County’s commission chairman,” Judge Adam Scott Tanenbaum, an appointee of Gov. Ron DeSantis (R), wrote. “The mask mandate, then, implicated the right of privacy. According to Gainesville Woman Care, the mask mandate was presumptively unconstitutional as a result.”

This language is very significant because it’s the first time a judge is using the principle of bodily autonomy to affirm a constitutional right not to have one’s breathing restricted. The lawsuit was originally brought last May by Justin Green, a Gainesville business owner, but he was denied an injunction against the mandate by Eighth Judicial Circuit Judge Donna Keim.

There are several very striking elements about this ruling, which will reverberate throughout the country even as the mask mandates officially expire. Defendants had argued that the mandate is now moot given the orders of the governor requiring all counties to end their mandates. However, the judge noted in a footnote, “Because of the nature of the various emergency orders that we have seen and the county’s continued commitment to public mask wearing, we are not convinced that this is the last that we will see of this issue.”

In other words, you can’t have a gross violation of the most fundamental rights hanging over our heads at any time and somehow suggest that we have no recourse to eliminate it. “We conclude, then, that this case fits within the exception to the mootness doctrine, which is for controversies that are capable of repetition, yet evading review,” presciently observed Judge Tanenbaum.

The judge also recognized that the pretext for these “fiats” and “diktats” is rooted in abuse of emergency powers, which can be repeated at any moment:

It would behoove the trial court also to consider that while article I, section 23 “was not intended to provide an absolute guarantee against all governmental intrusion into the private life of an individual,” Fla. Bd. of Bar Exam’rs re Applicant, 443 So. 2d 71, 74 (Fla. 1983), “even in a pandemic, the Constitution cannot be put away and forgotten.” Roman Catholic Diocese of Brooklyn v. Cuomo, 141 S. Ct. 63, 68 (2020). And there is this warning from William Pitt the Younger, roughly paraphrasing a similar sentiment in John Milton’s Paradise Lost: “Necessity is the plea for every infringement of human freedom.”

Drawing on precedent from the state’s supreme court, the judge ruled that bodily autonomy is a fundamental right. What this means is that the starting point for any mask mandate must begin with the government proving that masks absolutely work and are necessary to achieve a vital state interest. “The supreme court in Gainesville Woman Care told us multiple times what this special approach means for the evidentiary burden at a temporary injunction hearing: A plaintiff does not bear a threshold evidentiary burden to establish that a law intrudes on his privacy right, and have it subjected to strict scrutiny, ‘if it is evident on the face of the law that it implicates this right.’”

Also notable in this opinion is how the judge believes that the harm to plaintiffs is not just the threat of fines or denial of service.

Another consequence was being subjected to whispering informants, impelled by county-designed publicity like the following proposed signage encouraging citizens to inform on their disobedient neighbors.

The judge warned, “The threat of government-sponsored shaming was not an idle one. The chairman who issued the original mask mandate stated publicly that ‘masks are the only outwardly visible signal that you are contributing to the solution.’”

In other words, this line of reasoning will give plaintiffs throughout the country a continued cause of action to fight both the mask mandate and the vaccine mandate. Both of them violate bodily autonomy and use public shaming to coerce people to violate their autonomy. According to this ruling, any edict requiring masking for those not vaccinated would also violate the Constitution.

The next step for those seeking judicial relief would be a victory in federal court. It happens that the only lawsuit against the CDC mask mandate on public transportation, including airplanes, is in the U.S. District Court for the Middle District of Florida. Lucas Wall, a plaintiff from D.C., is suing the TSA, the CDC, and other federal agencies in federal court because he was prevented from traveling without a mask and is now stuck in Florida. The well-written and researched complaint accuses the government of violating fundamental rights, usurping legislative power, and providing no data that any of the policies are effective.

It’s also possible that Gov. Ron DeSantis’ lawsuit (also brought in the Middle District of Florida) against the CDC’s mandates on cruise liners could result in the collapse of the entire federal mandate, including on airplanes. During oral arguments last Thursday, U.S. District Court Judge Steven Merryday observed that the CDC’s own study showed that masks were “barely statistically significant” in stopping the spread of COVID-19. “Where does this mask efficacy theory come from?” Merryday said. “We’ve had masking and social distancing for a long time and we had a pandemic in the middle of it.”

Throughout the hearing, the judge seemed to oppose the entire premise that non-pharmaceutical interventions work against the virus, possibly opening the door for a very broad ruling against mask mandates, a ruling he promised “soon.”

At this pace, perhaps it’s a good thing for some of the mandates to remain in place just long enough to get standing to sue against them. For if we fail to destroy this ill-gotten government power while it’s unpopular, it will surely rear its ugly head next flu season.