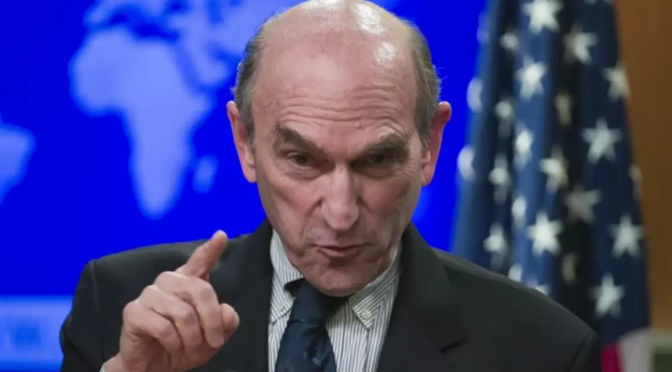 Before entering the Trump administration to serve as U.S. envoy to Venezuela and Iran, Elliott Abrams penned a revealing essay in May 2017, entitled “Why I’m Rooting for the Hardliner in Iran’s Elections: Two cheers for Ibrahim Raisi!”

Abrams was well aware of Raisi’s bloody track record as a judiciary official, where he was among the judges who oversaw the execution of thousands of political prisoners in the 1980s. Abrams was also well aware that a Raisi presidency could make him the apparent successor to the aging Supreme Leader Ali Khamenei, which could have far-reaching consequences for decades to come.

However, Abrams’ support boiled down to his belief that Raisi represents “the true face of the Islamic Republic, while Rouhani is a façade.” According to Abrams, elevating a hardliner like Raisi would bring the Islamic Republic closer to collapse and provide a “clearer view” of the nature of the regime. Such an understanding would make it easier to advance the pressure policies that Abrams and his like-minded compatriots favored, regardless of their interlocutor in Iran and what could be achieved through diplomacy.

Abrams was far from alone in his belief. The Foundation for Defense of Democracies, the architect of Trump’s maximum pressure policies, published a memo for the Trump administration arguing that Iran was susceptible to “coerced democratization” and suggesting that the administration “work to prevent Rouhani’s reelection.” This dynamic was not new, either, as some U.S. hawks revealed their preference for Mahmoud Ahmadinejad ahead of Iran’s notorious 2009 election.

Of course, Raisi was soundly defeated by the incumbent and relatively moderate President Hassan Rouhani four years ago, 57 to 38 percent. Amid high turnout, that outcome signaled continued support for international compromise, the lifting of sanctions, and promises of domestic reforms at home.

But what a difference four years, and a damaging U.S. pressure campaign, makes.

While Rouhani entered his second term with a mandate to pursue broader sanctions relief, U.S. hardliners promptly scuttled his prospects. At the urging of hawks like John Bolton and Mike Pompeo inside the Trump administration, and outside groups like FDD, Trump exited the nuclear deal that many Iranians had publicly celebrated just a few short years before.

In the months that followed, sanctions increased to heights not even seen during the height of the Obama administration. Rouhani’s moderation had been met with pressure, vindicating Rouhani’s critics who had warned that the United States could never be trusted.

Now, Rouhani is set to leave office with little to show for his engagement, and people in Iran are desperate and disillusioned amid continuing repression, dramatic sanctions-induced inflation, and a devastating pandemic. Amid widespread voter apathy triggered in large part by the continuation of sanctions, Iran’s leaders have brazenly rigged the game to the benefit of the candidate that U.S. and Iranian hardliners have actively rooted for: Ibrahim Raisi.

Now that the project of installing a hardline Iranian president with minimal voter participation is near complete, U.S. hawks will undoubtedly urge President Biden to finish what Trump started. Even in the face of continual blowback — on the nuclear issue, across the region, and for the people of Iran — direct military confrontation and the removal of the regime in Iran is the only outcome that will satisfy U.S. hawks.

As Abrams’ essay shows, U.S. and Iranian opponents of diplomacy pursue mutually reinforcing policies. Raisi recovered from a decisive defeat in large part thanks to maximum pressure, vaulting to the top of powerful judiciary and, almost certainly, soon to the presidency while the people of Iran bore the brunt yet again of America’s powerful sanctions. And, as Iran tips in a reactionary direction, U.S. hawks will find further justification to push even more escalatory policies.

President Biden has signaled a desire for a new approach and rightly invested significant energy in reviving the nuclear deal with Iran. But he also moved slowly, failed to take significant steps to open up humanitarian trade amid the pandemic and kept his predecessor’s sanctions in place.

Now, with Raisi’s elevation, Biden’s options narrow even further. He can continue his predecessor’s pressure-only approach that decimated moderates, empowered Raisi and his fellow hardliners, and closed the door on broader diplomacy.

Or he can restore the agreement Trump worked so hard to kill, ease the pressure on the people of Iran and restore some semblance of faith that diplomacy can deliver for each country. Only the latter has delivered any success — for both the United States and the people of Iran.