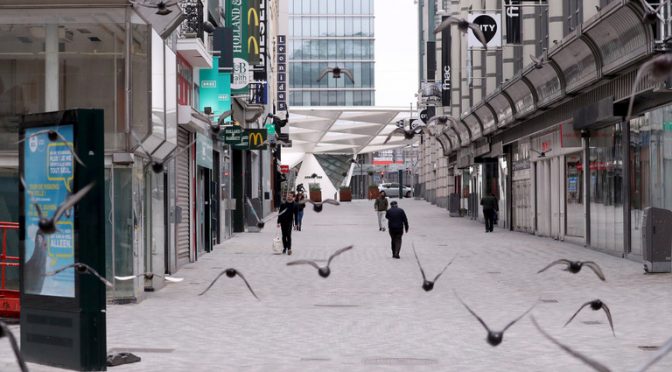 Since the onset of the covid-19 pandemic, governments around the world, along with a handful of unelected medical experts, have been behaving as though they are the social engineers of totalitarian regimes (e.g., fascism, Nazism, and communism).

To be more precise, this select group of political leaders and medical experts have upended economies, as well as the lives of billions of ordinary people, by implementing extremely coercive and restrictive lockdowns and physical distancing measures for the stated purpose of bringing the pandemic under control and preventing future outbreaks.

Specific measures have included curfews; police patrols on the streets; the compulsory closure of businesses deemed nonessential, as well as workplaces, schools, and institutions of higher education; the banning of social gatherings; the cancellation of sporting and cultural events; the suspension of religious services; and restrictions on personal movement and interactions at the local, national, and international levels. In many parts of the world, people have been subjected to mandatory stay-at-home orders, requiring them to spend most of the day confined and isolated in their homes.

Lockdown measures have also been used to prohibit people from engaging in public protests and freely expressing their opinions, as failure to comply with limits on social gatherings has led to people being arrested, detained, and fined. It has also not been uncommon to see excessive police force being used to enforce lockdowns and curfews, and to disperse protests against unreasonable restrictions. Some governments have also set up detention centers for international travelers entering into their countries, where they are forced to quarantine at their own expense while they wait for the results of their covid-19 tests. Shockingly, in early June 2021, the provincial government in Ontario, Canada, went so far as to announce that residents in long-term care homes would soon be permitted to engage in “close physical contact, including handholding” and “brief hugs” with visitors when both parties are fully immunized.

Unfortunately, instead of criticizing this state of affairs, the mainstream media and major social media platforms are fully on board. They have turned out to be willing collaborators of the governments in these matters by glorifying their oppressive and punitive measures, censuring critical viewpoints, and fostering a culture of surveillance, all while spreading fear. They have also been ceaselessly promoting the injection of experimental vaccines as the only solution that will bring totalitarian lockdown measures to an end.

If Karl Popper and Friedrich Hayek had witnessed the type of central planning that has taken place since the beginning of the pandemic, they would have called it “holistic social engineering.” They were convinced that supporters of the concept of a social engineer sought to extend “the power of the State” in controlling and reshaping society as a whole in accordance with their own ideals, goals, and wills. According to Popper, social engineers believe that they can diagnose the goals and needs of society, and then implement a strategy to achieve them through large-scale planning. However, such an undertaking would require social engineers to centrally coordinate the activities of millions of people by replacing the wills and ends of those individuals with their own. Meanwhile, Hayek stated that the best way to make everybody serve the ends of the social engineers is

to make everybody believe in those ends. To make a totalitarian system function efficiently it is not enough that everybody should be forced to work for the same ends. It is essential that the people should come to regard them as their own ends. Although the beliefs must be chosen for the people and imposed upon them, they must become their beliefs, a generally accepted creed which makes the individuals as far as possible act spontaneously in the way the planner wants. If the feeling of oppression in totalitarian countries is in general much less acute than most people in liberal countries imagine, this is because the totalitarian governments succeed to a high degree in making people think as they want them to.

Social engineers of the pandemic have been largely successful in convincing the masses that the oppressive lockdown measures that they are being forced to endure are ultimately in the best interests of society as a whole. In many instances, they have managed to make many people believe that the goals of the lockdowns are in fact their own goals. At the same time, social engineers have been discouraging “criticism,” as they do not “easily hear of complaints concerning the measures” that they have instituted. Accordingly, the critical views put forth by some journalists, activists, dissenters, legal experts, medical professionals, and anybody else who cares about freedom, human rights violations, and the common good have been systematically silenced. Popper explained that the social engineer:

will have to be deaf to many complaints; in fact, it will be part of his business to suppress unreasonable objections. (He will say, like Lenin, “You can’t make an omelette without breaking eggs.”) But with it, he must invariably suppress reasonable criticism also.

After nearly a year and a half of antiliberal, undemocratic, unethical, antiscientific, ahistorical, and oppressive governmental measures, while denying billions of people their basic human rights, freedom, and sovereignty, social and economic life has essentially been completely crippled in many countries and regions. Nonetheless, social engineers of the pandemic period have treated critics and complaints as “a blemish,” proof of irrationality, and violations of the common good.

Hayek and Popper incessantly warned about the form of central planning that we are currently being subjected to, which has been used by numerous dictators and tyrants such as Hitler, Stalin, and Pol Pot. They specifically argued that it would not only lead societies down “the road to serfdom,” but also cause irreversible, large-scale social and economic damage.

Furthermore, hundreds of millions of people have lost their jobs or endured income reductions, many small and medium-sized companies have gone bankrupt, unemployment rates have increased across major economies, and most countries have gone into recession.

Moreover, the lockdowns have also had a number of unintended social and health consequences, including increases in domestic violence to unprecedented levels, in the form of both physical and emotional abuse; a significant rise in substance abuse and related deaths (i.e., overdoses); worsening mental health problems leading to depression and suicides; isolation and antisocial lifestyles and behavior, particularly in children; physical inactivity and weight gain; and, the cancellation or delay of medical procedures, surgeries, and consultations.

The unexpected destructive consequences of the totalitarian lockdown measures will undoubtedly be felt for decades to come.

Hayek and Popper would not have been surprised that the lockdown measures generated so many adverse impacts on people, the economy, and society. In fact, they warned that social engineering could never successfully achieve its predetermined goals and ends in the real world for two main reasons: the limited and dispersed nature of human knowledge and the spontaneous forces of society. Based on the concept of dispersed knowledge, “we know little of the particular facts to which the whole of social activity continuously adjusts itself in order to provide what we have learned to expect. We know even less of the forces which bring about this adjustment by appropriately coordinating individual activity.”

Hayek and Popper would have argued that social engineers of the pandemic could not realistically possess the type and the abundance of knowledge needed to plan such large-scale oppressive lockdowns. According to them, by ignoring the dispersed nature of human knowledge, social engineers falsely believed that they could possess all of the knowledge required to redesign an entire society while also having complete control over all efforts directed toward the achievement of teleologically evaluated goals.

In fact, Hayek and Popper concluded that it was impossible to exercise complete control over society via social engineering because the limitations of human knowledge meant that nobody could foresee all of the possible consequences of human actions, which is necessary if common goals are to be achieved. These sentiments apply to contemporary social engineers of the pandemic, and could explain why they were unable to accurately predict the consequences of many of the oppressive policies and measures that were intended to mitigate the spread and impacts of covid-19.

Popper and Hayek argued that even if it were hypothetically possible for a social engineer to possess all the knowledge needed to centrally plan and organize an entire society, they would still be unable to attain their teleologically evaluated goals in the manner they envisioned on account of the spontaneous forces of society, which represent the second main obstacle to the success of large-scale central planning.

The spontaneous forces of society would make it impossible to effectively collect detailed information about the constantly changing activities, private interests, particular circumstances, complex relationships, and preferences of millions of people. The unexpected and unplanned outcomes associated with the spontaneous forces of society mean that the original plans of any social engineer will end in failure, because “the real outcome will always be very different from the rational construction” of the social engineer.

In order to realize their predetermined goals, social engineers would be forced to continuously modify and change their plans, while using their exclusive power to coerce individuals for the purpose of imposing increasingly restrictive measures. That is to say, they would need to constantly interfere in the choices that individuals make without having to obtain any input from them.

Hayek warned that the coercive measures employed by social engineers could “destroy those spontaneous forces which have made advance” and progress possible across history, and inevitably result in “a stagnation of thought and a decline of reason.” He wanted people to understand that while “it may not be difficult to destroy the spontaneous formations which are the indispensable bases of a free civilization, it may be beyond our power deliberately to reconstruct such a civilization once these foundations are destroyed.”

This is why Popper called social engineering the “greatest and most urgent evil of society.” According to him, “even with the best intentions of making heaven on earth it only succeeds in making it hell—that hell which man alone prepares for his fellow-men.”

Birsen Filip holds a Ph.D. in philosophy and master’s degrees in economics and philosophy. She has published numerous articles and chapters on a range of topics, including political philosophy, geo-politics, and the history of economic thought, with a focus on the Austrian School of Economics and the German Historical School of Economics. She is also the author of The Rise of Neo-liberalism and the Decline of Freedom (Palgrave Macmillan, 2020).