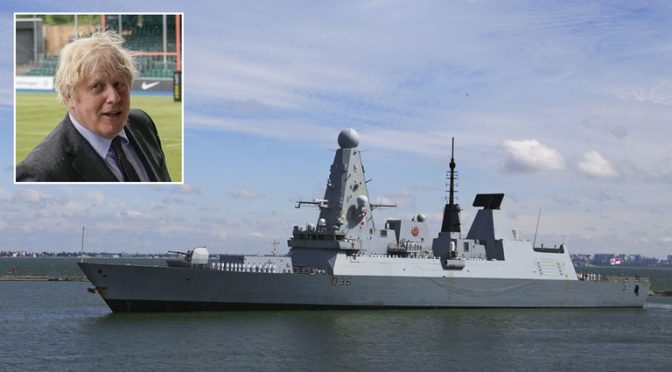 It sounds almost incredible that a war situation was only a shot away in such a grim face-off between NATO member Britain and Russia.

Russian patrol vessels fired warning shots at an armed British warship after it breached Russian territorial waters this week. Then a SU-24 fighter jet dropped bombs in the path of the British destroyer apparently forcing it out of Russian waters.

It sounds almost incredible that a war situation was only a shot away in such a grim face-off between NATO member Britain and Russia.

But what’s also condemnable is that the incendiary incident was a deliberate provocation by Britain. Russia has warned Britain not to provoke it again in the Black Sea. And Moscow accused London of telling barefaced lies.

The British government and its Ministry of Defense were quick to play down the incident, claiming that there were no warning shots fired on the Royal Navy guided-missile destroyer. London accused Russia of “disinformation” and maintained that HMS Defender was engaged in “innocent passage” through international waters in the Black Sea.

However, the official British version is contradicted by a BBC correspondent who was on board HMS Defender.

Jonathan Beale reported: “I am on board the warship in the Black Sea.The crew were already at action stations as they approached the southern tip of Russian-occupied [sic] Crimea. Weapons systems on board the Royal Navy destroyer had already been loaded.

This would be a deliberate move to make a point to Russia. HMS Defender was going to sail within the 12 mile (19km) limit of Crimea’s territorial waters. The captain insisted he was only seeking safe passage through an internationally recognized shipping lane.”

Thus, according to the BBC’s account, a fully armed and cocked warship deliberately entered territorial waters claimed by Russia (since Crimea joined the Russian Federation by a referendum in 2014). The crew were at action stations on their approach “to make a point to Russia”.

Such conduct by the British is nothing less than a wanton provocation to Russia. The BBC version concurs with Russia’s account of the circumstances, including the sound of warning shots.

One question is: why did the British government and MoD seek to immediately play down the incident, purporting to say that nothing had happened? London claimed that the warship was merely in the vicinity of Russian “gunnery exercises” as if it was all coincidence and that Moscow was engaging in disinformation about warding off the Royal Navy vessel.

Another question is: why was the BBC correspondent invited to take part in the Black Sea voyage of HMS Defender from the Ukrainian port of Odessa to Georgia skirting the Crimea Peninsula? It seems like the British may have been expecting their “point to Russia” would have been met with a passive response. And so the British would have been able to spin that their plucky navy was able to stick it to the Russians. Turns out though that the BBC man unhelpfully contradicted the military planners in London.

Britain was obliged to deny the military encounter because it knows full well that it was a provocative show of aggression by its warship. If the shots had escalated it could have been an act of war that Britain had instigated. Aggression is the supreme war crime as defined by the Nuremberg trials of Nazi leaders.

It is also reported that on Tuesday, the day before the skirmish, Ukrainian military chiefs were hosted onboard HMS Destroyer while docked in Odessa where they signed new military contracts with the British on naval cooperation. That the Brits then sailed the next day straight into Russian waters suggests that the maneuver was a calculated show of naval power in support of Ukraine’s claims of “fighting against Russian aggression”.

As far back as April, the British had given notice that they were intending to dispatch warships to the Black Sea “in support of Ukraine”. Russia responded angrily and warned Britain and other NATO members to stay away from its territory. Russia subsequently has deployed larger military forces in its Black Sea territory, including around the Crimea Peninsula.

That the British went ahead with their plans to send warships into disputed waters is further sign that London was deliberately goading Moscow.

What the Brits were not expecting, it seems, was the way Russia rapidly deployed firepower this week to underscore its warnings to back off.

This is the context for why international “stability talks” between the United States and Russia are an urgent matter. It remains to be seen if the American Biden administration genuinely responds to Moscow’s appeals for earnest negotiations to stabilize relations. NATO so far seems to be indifferent to Russian proposals for cooperating on forming new security mechanisms in Europe.

The deterioration in relations between Russia and the United States and other NATO members has reached a dangerous flashpoint. The arming by the U.S. and NATO of the anti-Russia regime in Kiev is fueling the potential for all-out conflict between nuclear powers. Western indulgence of Kiev’s reckless claims of “Russian aggression” is further insanity.

And amid the treacherous conditions, the British send a guided-missile destroyer into Russian waters in defiance of reasonable warnings. That’s just a shot away from disaster.

Incredibly, this is all happening on the 80th anniversary of Operation Barbarossa when Nazi Germany launched its war against the Soviet Union on June 22, 1941.

Finian Cunningham is former editor and writer for major news media organizations. He has written extensively on international affairs, with articles published in several languages.