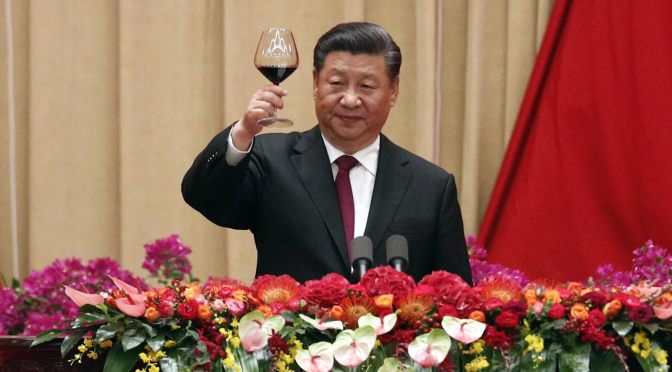 China’s growing confidence was highlighted in a thunderous speech by Xi Jinping at an event to mark the Communist Party’s centenary, at which he promised the country would no longer be oppressed by foreign powers.

If anyone needed a marker of where China has come from, where it is now, and where it is heading, it came at Thursday’s event celebrating the 100th anniversary of the founding of the Communist Party (CPC), where Xi Jinping made a defiant address.

Xi stated that “no one should underestimate the resolve, the will, and ability of the Chinese people to defend their national sovereignty and territorial integrity” and “we will never allow anyone to bully, oppress, or subjugate China,” adding that anyone who tries to do so would “have their heads bashed bloody against the Great Wall of Steel forged by over 1.4 billion Chinese people.” He also praised the accomplishment of a “moderately prosperous society,” reflecting on China’s rapid economic development.

The West might be keen to dismiss all this as propaganda, yet China’s trajectory speaks for itself. While the speech did not cover the disruptions along the way – including the Great Leap Forward and the Cultural Revolution, both inflicted on the country by Mao Zedong’s power struggles and ideological adventurism – the message was clear: what the CPC has delivered is both credible and substantial.

For example, in 1949, when the party first came to power, China’s annual disposable income was a mere 49 yuan. By 2018, it had risen to 28,000 yuan ($4,030). Figures such as these neatly fit into the bigger story the celebrations aim to tell: that the CPC has transformed China from a divided, backward, and impoverished nation into one of the world’s leading economic powers, and has dramatically transformed the way its people live.

One of Xi’s key messages to the West – which was condemned for its “sanctimonious preaching” – was that China will follow the dictum of ‘if it ain’t broke, don’t fix it.’ He set the tone firmly that the country’s development pathway – dubbed “socialism with Chinese characteristics,” and mixing socialist theory with a methodological pragmatism – has been hugely successful. It’s very hard to dispute this, which is what makes it so ideologically threatening.

This helps us understand a broader theme in Xi’s rhetoric: that China is not out to conquer the world or expand its ideology to all nations, as many believe. Instead, it is focusing on the broader idea of national rejuvenation – that the CPC is reviving and restoring the country from a legacy of affliction and humiliation, as seen, for example, in the Hong Kong national security law, and that it is now sovereign and capable of defending itself, having been subjugated by Western powers.

As Xi noted, “China was gradually reduced to a semi-colonial, semi-feudal society, and suffered greater ravages than ever before. The country endured intense humiliation, the people were subjected to great pain, and the Chinese civilization was plunged into darkness.” In highlighting this, he was making clear that China will not be adventurist, but is a country seeking to hold its own and will not tolerate foreign aggression.

And he continued: “The victory of the new-democratic revolution put an end to China’s history as a semi-colonial, semi-feudal society, to the state of total disunity that existed in old China, and to all the unequal treaties imposed on our country by foreign powers and all the privileges that imperialist powers enjoyed in China. It created the fundamental social conditions for realizing national rejuvenation.”

The priority is upholding, defending, and protecting sovereignty, and he sent out a strong message about Taiwan, highlighting his “unshakeable commitment” to it while promising that China had the strength, resolve, and capability to stand up to growing Western pressure, particularly from the United States.

Of course, it is China’s continuing success and the novelty of its rise that have made it so threatening to the status quo long dominated by the West. The dream of many that China would transition into a liberal, democratic society as it grew has not materialized, and this has sparked fears that Beijing’s own model may be superior.

In this case, Xi’s message, which exhibited both strength and triumph to some observers, will have been interpreted by others as threatening in the context of the CPC’s rise to prominence and a new world order. It arguably sets the stage for the great power struggle of the 21st century, and we should be in no doubt that the US is determined to block it at all costs. But will it succeed? Only time will tell.