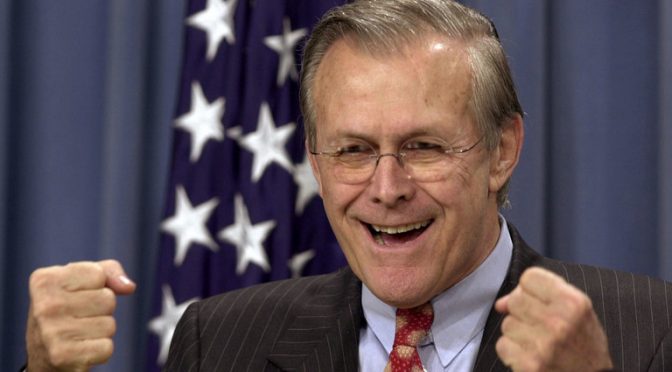 In my time as a US intelligence officer and UN weapons inspector, I was twice privy to the former US defense secretary’s MO: to manufacture and manipulate ‘intelligence’ so as to start wars. The Devil will need to watch his back.

While I never met Donald Rumsfeld in person, our paths crossed indirectly on several occasions. What I learnt from these experiences hardened my heart toward a man who caused so much harm based on actions that placed ambition over integrity.

In the days following my September 3, 1998, testimony before a joint session of the Senate Armed Forces and Foreign Affairs Committees, where I challenged the US government’s inconsistent policies regarding the disarmament of Iraq, I received a letter from the former defense secretary. When I heard yesterday that Rumsfeld had passed away at the age of 88, I re-read the letter and ruminated about the man who wrote it, and how I felt about him in retrospect.

Any direct communication from a former cabinet member – especially a secretary of defense – is not to be trifled with, especially if it is complimentary in tone and content.

“Dear Mr. Ritter,” Rumsfeld wrote, “I watched you on C-SPAN as you presented your testimony to the Senate Foreign Relations Committee.”

“It was a superb job. You presented your position thoughtfully, constructively, and forcefully, and were not blown by the winds from the other side of the table. Congratulations on your testimony. Congratulations on your performance on behalf of the UN and the United States.  Know that you have my best wishes for what I am confident will be a superb future. We need more people like you in our wonderful country, and the example you are setting is a proud one.”

Rumsfeld’s letter gave me pause. Up until that time, I’d had no direct connection with the man. I knew of him by reputation only, first as secretary of defense under President Gerald Ford who, together with the then-White House chief of staff Dick Cheney and a Pentagon official named Paul Wolfowitz, helped promulgate exaggerated claims of Soviet strategic nuclear capability through a so-called ‘Team B’ of politicized analysts whose mission was to second-guess a more nuanced and balanced assessment delivered by the CIA.

The Team B assessment went on to influence the national security policies of the Reagan administration, leading to a nuclear arms race coupled with a dangerous escalation of tensions between the US and the Soviet Union that nearly manifested itself on more than one occasion in the kind of nuclear conflict that would have ended the world as we knew it.

As I was someone who had helped the US and the Soviet Union climb down from the threat of conflict premised on exaggerated threats through the vehicle of verifiable disarmament, the cabal of conspiracy theorists with whom Rumsfeld had found common cause did not register high on my list of people whose opinion I respected.

My opinion of him did not improve when, during my work as a UN weapons inspector charged with disarming Iraqi weapons of mass destruction (WMD) capabilities, I had the occasion to debrief General Wafiq al-Samarrai, the former head of military intelligence under Saddam Hussein. Samarrai provided the Iraqi perspective on a pair of visits made by Rumsfeld to Iraq – one in December 1983 and another in March 1984 – and the consequences of these visits.

He noted that the purpose of Rumsfeld’s two high-profile missions to Baghdad, where he served as a direct envoy of then-president Ronald Reagan, was to foster a better relationship between the two nations in an effort to make joint cause against their common enemy, Iran. This goal, however, was complicated by Iraq’s ongoing use of chemical weapons against Iran, which put the US in the difficult position of having to condemn Iraq at the same time as it was seeking better relations.

The irony of the US angst, Samarrai told me, was exposed later, when, as a result of the Rumsfeld missions, the US began sharing intelligence with Iraq that helped the Iraqi military target Iranian troop concentrations. This intelligence was critical to Iraq’s success in the second battle of al-Fao, in April 1988, during which the Iraqis used information gleaned from US satellite imagery to help target Iranian defenses with chemical weapons, leading to the destruction of Iranian forces and the recapture of the Fao peninsula.

According to Samarrai, the US intelligence personnel who sat with him inside the military headquarters complex in Baghdad knew what the Iraqi plans were, including the use of chemical weapons, and how the intelligence they were providing would facilitate the deployment of those weapons.

My meetings with Samarrai, which took place over time, initially in the headquarters of the Jordanian General Intelligence Service, in Amman, and later in safe houses operated by the British Secret Intelligence Service in London, only reinforced my overall low opinion of US policy regarding Iraq, and those who formulated and implemented it, including Donald Rumsfeld.

By the time I received Rumsfeld’s letter, I had earlier reviewed the work of the so-called ‘Rumsfeld Commission’ on the threat posed by ballistic missiles. In May 1998, I had been told by Randy Scheunemann, who, at the time, was a senior national security advisor to then-Senate majority leader Trent Lott, that my assessments regarding Iraqi missile capabilities, which had been shared with the US by the UN, had played a major role in influencing the Rumsfeld Commission’s assessment of Iraqi capabilities.

Indeed, when I read the executive summary of the commission’s report, I found my voice present in the text:

“Iraq has maintained the skills and industrial capabilities needed to reconstitute its long range ballistic missile program,” the report noted.

“Its plant and equipment are less developed than those of North Korea or Iran as a result of actions forced by UN Resolutions and monitoring. However, Iraq has actively continued work on the short range (under 150 km) liquid- and solid-fueled missile programs that are allowed by the Resolutions. Once UN-imposed controls are lifted, Iraq could mount a determined effort to acquire needed plant and equipment, whether directly or indirectly.”

In many ways, this assessment represented almost word for word the reports I was preparing at the UN about the risks of having economic sanctions lifted without a viable ongoing monitoring presence in place.

But then the report added a sentence that deviated from all reality: “Such an effort would allow Iraq to pose an ICBM [intercontinental ballistic missile] threat to the United States within 10 years.”

As someone who had investigated the Iraqi ballistic missile capability more closely than any other person on the planet, I knew this statement to be false, and, indeed, every report I prepared for the UN pointed out that Iraq did not possess the ability to produce a viable missile threat either to Europe or the US, and there was no indication that Iraq would, if able, ever seek to acquire such a capability.

As far as I was concerned, the Rumsfeld Commission was little more than Team B reconstituted, this time to exaggerate the threat of ballistic missiles from Iraq in the same way Team B had exaggerated the threat posed by Soviet missiles back in the 1970s.

So, when Rumsfeld was nominated and subsequently confirmed as the secretary of defense for President George W. Bush, I knew exactly the character and ability of the man who would be central to the Bush administration’s WMD-based case for war with Iraq. And, as such, his exaggerated hyperbole in selling the conflict before, during, and after the decision to invade was made came as no surprise.

Given Rumsfeld’s role in fabricating threats to the national security of the US in the form of Team B and the Rumsfeld Commission, I was not taken too much aback when information about the formation of the Office of Special Plans (OSP) – a special unit whose mission was to cherry-pick intelligence reports to manufacture a case for war with Iraq – became public. This was, after all, Rumsfeld’s modus operandi.

What I was not prepared for was the meeting I had in Amman in December 2003 with a former senior Iraqi officer who had been involved in Iraq’s ballistic missile programs. This officer informed me that, in the summer of 2003, he had been interrogated on several occasions by a team from the OSP that had situated itself in one of Saddam’s former villas in what was, in post-invasion Baghdad, known as the Green Zone.

This team was concerned that the US had not found any WMD. “Our president is in trouble,” they told this Iraqi officer. The team wanted him to help them come up with a scheme whereby nuclear material would be brought into Iraq and hidden in a manner that suggested it had existed during the time of Saddam.

The Iraqi officer would then help them fabricate documents attesting to the authenticity of this material, constructing a false chain of evidence that would link it to Saddam’s regime. It would then be ‘discovered’ by the CIA-led team overseeing the search for WMD in Iraq at the time.

The Iraqi officer scoffed at the idea. “You do know,” he told them, “that there are experts in uncovering Iraqi WMD, like Scott Ritter, who would expose such an effort as a fraud in short order. You’d never get away with it.”

The OSP team was nonplussed by this objection. “You know Ritter and how he operates,” they responded. “You can help us build a bulletproof case that even he couldn’t poke holes in.”

The Iraqi officer laughed. “We spent nearly a decade trying to construct lies to conceal our WMD from Mr. Ritter,” he said. “He uncovered them all. Why do you think we would have any better luck now?”

The OSP team eventually got the point, and never again mentioned the idea of planting WMD in Iraq. But what this incident, if true (and I’ve never had any reason to doubt the veracity of anything this particular Iraqi ever told me – his reporting on the fate of Scott Speicher, the US pilot shot down during the Gulf War, was unerringly accurate), underscored the extent to which Rumsfeld and his minions would go to mislead the American people about issues that eventually cost the lives of thousands of US servicemen and women, bankrupted the country they served both morally and fiscally, and left hundreds of thousands of Iraqis dead and their country in ruins.

Donald Rumsfeld, in his letter, told me that the example I was setting to the people of America was “a proud one.” I wish I could say the same about any aspect of his decades of service. There is a place in hell reserved for those who deliberately put the lives of those entrusted to secure our nation at risk for their own personal gain. Rumsfeld is one such person, and his seat should be right next to the Devil himself.

Scott Ritteris a former US Marine Corps intelligence officer and author of ‘SCORPION KING: America’s Suicidal Embrace of Nuclear Weapons from FDR to Trump.’ He served in the Soviet Union as an inspector implementing the INF Treaty, in General Schwarzkopf’s staff during the Gulf War, and from 1991-1998 as a UN weapons inspector. Follow him on Twitter @RealScottRitter