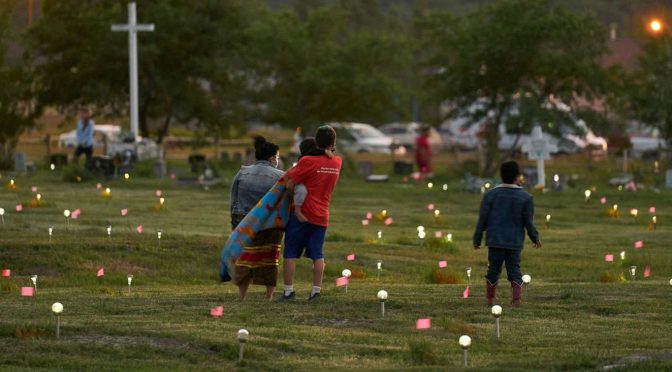 Hundreds of unmarked graves have been discovered on the premises of another former ‘Indian residential school’ in Canada, throwing further light on the extent of the genocide of indigenous children.

On Thursday, June 24, the Cowessess First Nation said in the press conference at least 600 unmarked graves have been discovered on the grounds of what used to be the Marieval Indian Residential School in Saskatchewan.

Cowessess chief Cadmus Delorme also stated that the radar search had indicated 751 graves in the ground, adding that the ground-penetrating radar system used to discover these graves has an error rate of 10% to 15%. This would translate to at least 600 graves on the grounds. The news comes barely a month after 215 unmarked graves of children were discovered on the grounds of the former Kamloops Indian Residential School in British Columbia.

In the press conference, Delorme also stated that the graves are being treated as “unmarked graves” rather than “mass graves” as of now. Much like the Kamloops schools, the Marieval school was also operated by the Roman Catholic Church between 1886 and 1970. The Church controlled more than two-thirds of all the so-called Indian residential schools in Canada.

“In 1960, there may have been marks on these graves. The Catholic Church representatives removed these headstones and today they are unmarked graves,” stated Delorme. Removing grave marks or gravestones is a criminal act as per Canadian law, and chief Delorme added that the ground will be treated as a crime scene.

He also noted that it is yet to be ascertained whether the graves discovered are all that of children. “We cannot confirm they are all children. But there are oral stories that there are adults in this gravesite, as well,” Delorme added. The discovery has attracted further outrage across Canada, which is reeling from the discovery of the Kamloops graves.

A joint statement released by the Cowessess First Nation and the Federation of Sovereign Indian Nations (FSIN) stated that “our community is in mourning and our families are in pain. Every one of our Cowessess members has a family member buried there. The pain we are feeling is real.”

FSIN chief Bobby Cameron, who had earlier called the discovery a proof of genocide in the country, emphasized that sadly “this is just the beginning.” He pointed out that thousands of children have died in these residential schools for the better part of the 19th and 20th century.

“There are thousands of families across our Treaty territories that have been waiting for their children to come home. Saskatchewan had the highest number of residential schools and highest number of survivors. There will be hundreds more,” he added.

The province of Saskatchewan in central Canada has a large indigenous population, constituting over 16% of the total population – much higher than the national average of less than 5%. The province also had the last of the operational Indian residential schools in the country, Gordon’s Indian Residential School in Punnichy, which was closed only in 1996.

The Truth and Reconciliation Commission of Canada (TRC), in its final report released in 2015, had documented 566 deaths in the school in its nearly nine decades of operation. The TRC stated that these confirmed deaths are still only a partial record and that the actual numbers could be much higher.

Indigenous leaders and TRC officials have often called for a nationwide search and discovery of all unmarked graves, to identify the victims of the residential schools and allow proper burials as a step towards justice for a historical crime. Over 6,000 students are estimated to have died in these schools that operated for nearly a century or even longer across Canada.

“This horrific truth can no longer be ignored,” said Stephanie Scott, executive director of the National Centre for Truth and Reconciliation (NCTR). “The least governments and churches must do now is to provide access to the necessary records to identify the locations of all the children and allow communities to honor them with the traditional ceremonies and protocols they were denied.”