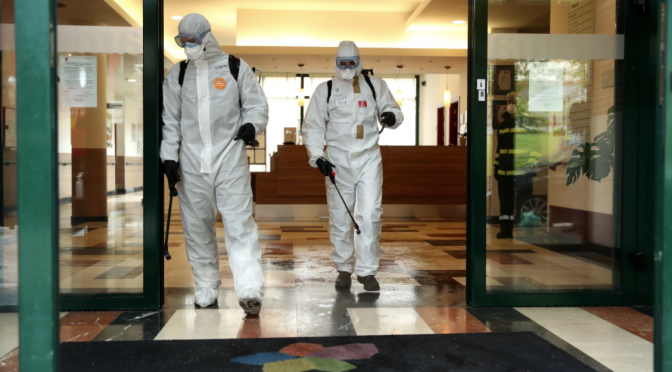 Usually, when the rule needs to updated in the name of “national security” it’s always about protecting, not the people, but the position of those who have been running the show for so long.

Capitalizing on the Deep State’s COVID19 success worldwide, Spain now wants all existing draconian COVID19 measures to be permanent and prevalent to all sectors of society. All citizens, the plan says, without exception must comply with the orders and instructions issued by the authorities.

Here’s the translated text of the ElPais article:

The Government will have the power to impose “personal benefits” on citizens, according to the reform of the National Security Law

Any person of legal age shall be obliged to carry out the “personal benefits” required by the competent authorities, following the guidelines of the National Security Council, when a state of crisis is declared in Spain. In this case, all citizens without exception must comply with the orders and instructions issued by the authorities.

This is established by the reform of the National Security Law prepared by the Government and which incorporates some of the lessons learned during almost a year and a half of the health crisis.

In the event that a state of crisis is declared in Spain (“situation of interest to National Security” is the name given by law), the authorities may also proceed to the temporary seizure of all types of property, at the intervention or provisional occupation of those that are necessary or the suspension of all kinds of activities. Those who suffer economic damages due to the requisition of their property or the interruption of their activity will have the right to be compensated. In its first drafts, the law excludes the payment of compensation to those who are obliged to make a personal benefit.

Although the draft does not specify it, it is assumed that the personal benefits and the requisition of material will be related to the type of crisis in question, whether of a health, environmental, economic, financial nature, etc. What the articles do make clear is that the measures adopted will be gradual and proportionate to the situation to be faced and will be limited to the time strictly necessary to overcome the crisis situation.

The duty concerns not only all citizens but also companies and legal entities to collaborate with the authorities to overcome the crisis, through a provision of a personal or material nature. The text is based on article 30 of the Constitution, according to which “Spaniards have the duty and right to defend Spain”.

It is the same article that regulates compulsory military service (suspended in Spain since 2001), although it does not refer to its 2nd section, which establishes the “military obligations of the Spanish”, but to the 4th, according to which, “by law, the duties of citizens may be regulated in cases of serious risk, catastrophe or public calamity ”, a constitutional provision whose development has remained until now unpublished.

Although it provides for the imposition of personal and material benefits, the National Security law is ordinary, unlike that of the 1991 Military Service, which was organic; which can pose legal problems since only organic laws can affect fundamental rights. In addition, the declaration of a situation as “of interest to National Security” (that is, a state of crisis), by royal decree, corresponds exclusively to the President of the Government and not to Congress, although the Courts must be immediately informed of the measures taken.

Obligation of the media

During the pandemic, the Government did not resort to the declaration of “situation of interest to National Security”, but to the state of alarm, regulated by a 1981 law. However, with the reform that is now being finalized, the Security Law Nacional could be more suitable to face this type of situation. Among other novelties, the draft includes the obligation of the media to collaborate with the competent authorities in the dissemination of information of a preventive or operational nature.

The most important thing, however, is that it incorporates measures to avoid the recurrence of shortages of products and goods critical to face a crisis, such as the lack of masks, respirators and PPE that occurred when contagions began to spread massively .

The draft was seen in first reading by the Council of Ministers on June 22 and is pending final approval for submission to Congress, although its content has already been reported to the autonomous communities and some parliamentary groups.

Its preparation responds to the mandate contained in a provision of the National Security Law of 2015, which gave the Government a period of one year, obviously not complied with, to send to the Courts a “draft law regulating the preparation and disposition of resources to National Security ”. Instead of developing this new rule, the Government has preferred to reform the current law in light of the experience gained in the fight against the coronavirus.

One of the main lessons of the pandemic has been the need to guarantee the supply of critical resources in situations of international crisis, given the difficulty of acquiring them in a market stressed by the restrictions on their export imposed by the producing countries and the speculation derived from the excess demand and shortage of supply. For this reason, the text is committed to guaranteeing the supply of essential and strategic resources through self-sufficiency under exceptional conditions.

To this end, the National Security Council will prepare and update a catalog of human and material resources, publicly or privately owned, that may be useful in the event of a crisis. The catalog will be approved by the Council of Ministers and will have the contributions of autonomous communities and local entities. Plans for the preparation and disposal of the resources included in the catalog will be approved and exercises will be carried out to check their availability, although without actual deployment of means. – ElPais.com

However, any crisis can be manufactured at will, and the media as they say will take care of the rest.

On top of that, even the people in the highest echelons of government are not knowledgeable enough to understand the blatant manipulation from corporate boardrooms abroad.

Those are some of the reasons why events like the COVID19 plandemic need to be exposed as early as possible, so that citizens of other countries, including their leaders are alerted, that the whole operation is just based on false information, and therefore, all recommended draconian government policies and supposed countermeasures, ridiculous and stupid as they are, are exposed to be based merely on carefully planned events for the ultimate extraction of national sovereign wealth.

Recall, that Pfizer has been accused of “bullying” Latin American governments in COVID-19 vaccine negotiations and has asked some countries to put up sovereign assets, such as embassy buildings and military bases, as a guarantee against the cost of any future legal cases, the Bureau of Investigative Journalism can reveal.

In the case of one country, demands made by the pharmaceutical giant led to a three-month delay in a vaccine deal being agreed. For Argentina and Brazil, no national deals were agreed at all. Any hold-up in countries receiving vaccines means more people contracting COVID-19 and potentially dying.

Officials from Argentina and the other Latin American country, which cannot be named as it has signed a confidentiality agreement with Pfizer, said the company’s negotiators demanded additional indemnity against any civil claims citizens might file if they experienced adverse effects after being inoculated. In Argentina and Brazil, Pfizer asked for sovereign assets to be put up as collateral for any future legal costs.

One official who was present in the unnamed country’s negotiations described Pfizer’s demands as “high-level bullying” and said the government felt like it was being “held to ransom” in order to access life-saving vaccines.

For governments to pass the burden associated with its own inadequacy to the people is not only reprehensible, it is highly violative of its sworn duties to serve and protect the nation from foreign invasion, whether in the form of bullets, or bioweapons in the form of vaccines.