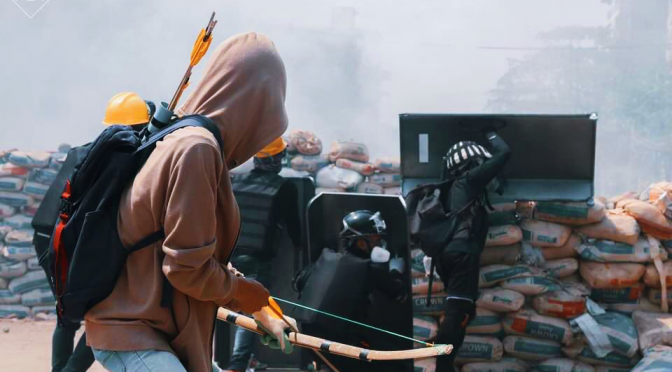 All too predictably, the crisis in Myanmar has rapidly spiraled out of control with what we were told were “peaceful” “pro-democracy” protesters transforming into heavily armed militants fighting Myanmar’s central government, its police force and its armed forces with war weapons.

Of course, the protests were never peaceful. The Western media only claimed as much to then depict subsequent security operations against what were in fact very violent protests and a nascent militancy as “brutal repression” and as a means to justify more direct Western intervention in a political crisis already driven by decades of Western interference.

But just as was the case in similarly US-engineered conflicts in Libya and Syria in 2011, the ability to cover up the violence of the opposition, their use of war weapons and terrorism, as well as their carrying out of atrocities has become impossible to conceal.

A June 2, 2021 Reuters article titled, “Boycott and bombings mar Myanmar’s new school year,” would note that growing armed attacks from the opposition prompted security forces to stand guard at schools and bring students “under armed escort from their homes.”

The article noted that teachers were also in fear for their safety, going to school in “normal clothing” and then changing into their government uniforms “only inside the school.”

Despite admitting to a “a series of bombings” targeting educational institutions across Myanmar, Reuters deliberately attempts to downplay the terrorism and add ambiguity when attributing who is carrying out the terrorism.

However, opposition media inside Myanmar including US government-funded ‘Myanmar Now,’ have quoted leaders of armed opposition groups admitting to their terror campaign against schools and other public facilities.

While peaceful protests continue—albeit on a far smaller scale than in the early days of the movement—they have been increasingly overshadowed in recent weeks by almost daily reports of shootings and bombings.

One of the most recent came on Tuesday afternoon, when a lone gunman shot at two soldiers stationed outside the No. 32 Basic Education High School in Mandalay’s Pyigyidagun Township, killing one and injuring the other.

Unlike many such incidents, this one could be attributed to a particular group—the Mandalay People’s Defence Force (PDF), part of a nationwide network of local civilian resistance forces that aims to coalesce into a federal army.

“Our PDF team has started carrying out guerrilla activities in Mandalay,” said Bo Nat Khat, one of the group’s leaders. He also claimed responsibility for a recent series of small explosions in five townships.

Speaking to Myanmar Now by phone, he also acknowledged that the shift to more confrontational tactics could make life more dangerous for ordinary citizens.

“We don’t want people to go to crowded places such as the electricity office or the courts,” he warned.

He insisted, however, that the only civilian targets would be officials and others who have collaborated with the regime in its bid to cement its hold on power.

These so-called “People’s Defense Forces” are clearly not acting in self-defence but instead are openly admitting to carrying out violence to remove the current government from power and to seize control of the country for themselves and the so-called “National Unity Government” (NUG) chaired by the remnants of Aung San Suu Kyi’s US-backed National League for Democracy (NLD) party.

Thus, just as Reuters and many others did in 2011 regarding Libya and Syria, the Western media is deliberately ignoring admissions from among the opposition itself to the use of terrorism and instead, continuing to depict the crisis in Myanmar as a one-sided campaign of violence by the nation’s government and military.

While the United Nations and other supposed international institutions have continuously condemned and pressured Myanmar’s government and military in line with Washington’s foreign policy objectives, there have been recent admissions by even them regarding atrocities being carried out by armed opposition groups.

The UN in Myanmar is alarmed at recent acts of violence that illustrate a sharp deterioration of the human rights environment across Myanmar.

One such case is the discovery of two mass graves in Myawaddy Township (Kayin State), containing the human remains of twenty-five people who had reportedly been detained on 31 May by the Karen National Defense Organization (KNDO).

The “Karen National Defense Organization” (KNDO) is among several ethnic armed groups propped up by the US and British governments for decades as part of an ongoing effort to divide Myanmar territorially and undermine the nation’s central government and military since it gained independence from Britain in 1948.

The US and British governments had openly armed and trained these groups during World War 2 and have since provided them with support through organisations like USAID, the National Endowment for Democracy (NED) and through more clandestine and indirect forms of support, particularly in regards to providing arms and military training.

Little if any mention is made of the atrocities carried out by these ethnic armed groups, atrocities that have been ongoing throughout the decades in their fight to divide Myanmar into a patchwork of Western-sponsored ethnic narco-terror fiefdoms. But these are atrocities now expanding as armed conflict spreads across the country, now under increased international scrutiny, making it increasingly difficult to hide.

The current conflict was easily predicted if we understand the foreign interests involved in engineering it. It is equally predictable that the Western media will continue spinning, downplaying or altogether attempting to cover up opposition terrorism and atrocities now being carried out inside Myanmar in a deliberate effort to assist US, British and European Union efforts to sell continued and escalating pressure on Myanmar’s government and military.

The end goal is collapsing the current government, dismantling Myanmar’s powerful and independent military and leaving Myanmar a divided and destroyed failed state unable to function as a constructive partner to its neighbours and main trade partners, namely China and Thailand.

China’s many ongoing projects within Myanmar including the extension of its One Belt, One Road initiative will be open to attack by militant groups the US will be able to more openly back and maneuver within Myanmar. This is essentially the entire objective of Anglo-American interference in Myanmar’s internal political affairs, the encirclement and containment of China by dismembering an important partner along Beijing’s periphery.

A concerted effort through alternative media and at the UN by Myanmar’s allies will be required to stave off the implementation by Western interests of the ‘Libya Model’ now playing out in Southeast Asia.