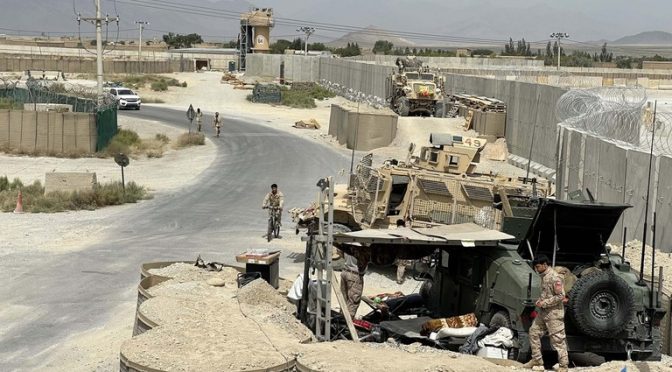 Following two decades of occupation that produced no tangible results in the interests of global peace and security, the US reportedly slipped out of Bagram Airfield after dark without notifying the base’s new Afghan commander.

The US abandoned the Bagram Airfield “after nearly 20 years by shutting off the electricity and slipping away in the night without notifying the base’s new Afghan commander, who discovered the Americans’ departure more than two hours after they left,” the Associated Press news agency reported on Tuesday, citing Afghan military officials.

They left behind 3.5 million items, ranging from bottles of water and phones to civilian vehicles, many of which don’t have keys to start them. This, plus the fact that the lights reportedly abruptly went down and there were no longer any guards on duty, apparently tipped off an army of looters, who then infiltrated the base.

Reportedly, about 5,000 inmates – many of them alleged Taliban operatives – remain in prison on the territory of the Bagram airfield.

After almost two decades of occupation and no clear military objectives, this haphazard withdrawal from what was the staging point for American and NATO operations in Afghanistan shows that the US-led coalition never had any unified plan in the country. The same could be said of many other countries occupied by the Western military.

This will come as no surprise to many. In fact, former Secretary of State Colin Powell’s chief of staff, Colonel Larry Wilkerson, who was very involved in the military’s decision-making at the time of the invasion of Afghanistan, perfectly summed up this lack of a strategic line in a 2018 speech at the Ron Paul Institute’s Washington conference.

He argued that, despite there being strategic thinking in the Pentagon, the US had no clear strategy in Afghanistan. Some examples of this noted by Wilkerson would be maintaining a presence in Afghanistan in order to use it as a staging point for the US military to pounce on Pakistan’s nuclear stockpile should it be overrun by militants, using Afghanistan as a base to militarily disrupt China’s Belt and Road Initiative, or providing a home for American intelligence to exploit racial tension in China’s Xinjiang Uighur Autonomous Region.

It’s unknown whether any of these policies have been seriously contemplated since Wilkerson’s departure, but like anything else in the tangle of Washington’s bureaucracy, and because there are so many branches of government involved – many of which compete against each other for clout and funding – the answer is probably not so clear-cut.

Take the example of Syria to illustrate this point. In the spring of 2016, reports surfaced that Pentagon-backed Kurdish militias were sparring with CIA-backed rebels, which was a total embarrassment when it came to Washington’s foreign policy in the country.

That situation just went to show how messed up the US national security state is, with different agencies having different goals – for example, one, the CIA, wanted to overthrow Syrian President Bashar Assad, while the other, the Pentagon, wanted to fight Islamic State (IS, formerly ISIS). These two goals contradicted each other, because Assad was IS’ primary adversary, and, actually, the CIA’s goal of overthrowing him created the necessity for the second, as it had initially armed the militant opposition to the Assad government from which IS would later branch off.

Similarly, understanding the US-NATO occupation of Afghanistan is probably just as convoluted, if not more so, and there could be multiple explanations for why it lasted so long. One obvious one, which could also be seen as the reason some NATO members protested the US’ withdrawal, is the fact that Afghanistan pretty much functions as a lab for weapons manufactured by these countries.

Of course, war has often been used for such purposes. Just watch Sacha Baron Cohen’s interview on the show ‘Who Is America?’ to see how former Vice President Dick Cheney talked about his “favorite war,” the first Iraq War, when the US got to show off its new experimental weapons just as the Soviet Union’s power waned.

In Afghanistan, weapons manufacturers around the world seem to be exploiting the lack of any clear strategic objectives to continue to push their weapons. For example, the Czech Republic –  a European NATO member, but not in any way a global military contender – has, surprisingly, been one of the most enthusiastic supporters of the war in Afghanistan. President Miloš Zeman has consistently been among the leading critics of the US withdrawal and has made his disagreement clear to senior US officials on numerous occasions.

This hardline position from a country with little or no strategic interest at all in Central Asia might seem confusing, but it makes more sense when you consider that the Czech Republic has for some time been and continues to be dependent on heavy manufacturing – mostly of vehicles and industrial equipment – and has a growing defense sector.

In fact, just months ago, the Czech government approved the creation of an Agency for Intergovernmental Defense Cooperation to help its companies sell weapons around the world, modeled on similar agencies in countries such as the United States and Israel. With that in mind, it can’t be ruled out that Prague’s strong commitment to forever war has been given a push by its defense industry.

Of course, it’s not the only part of the equation, and we might never know the whole strategic calculus behind this nearly 20-year-long occupation that has produced no tangible results in the interests of global peace and security. Instead, all we’re left with after decades of death and destruction, is the US and its allies withdrawing in a way that was apparently inspired by an article by The Onion from 10 years ago titled ‘US Quietly Slips Out Of Afghanistan In Dead Of Night’.