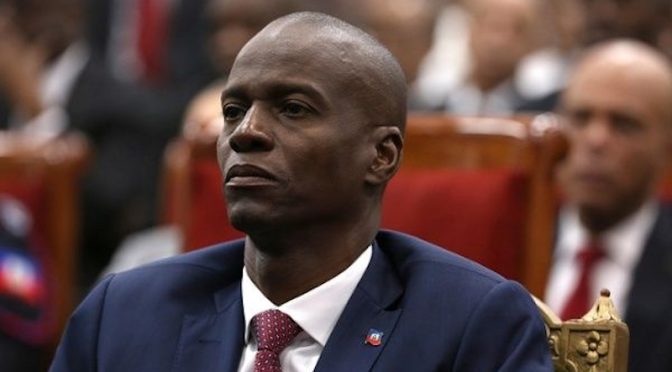 Jovenel Moïse was a violent and corrupt tyrant. While his passing may not elicit much sympathy, the Haitian president’s assassination should not be celebrated.

Backed by Washington and Ottawa, Moïse appears to have been killed by elements within his own violent PHTK political party. The well-organized operation was probably bankrolled by one of the country’s light skinned oligarchs and almost certainly carried out with support from inside the government. Police controlled the road to his house yet this video shows a convoy of armed men moving methodically up the hill towards the president’s residence. The presumed assassins announced that they were part of a US Drug Enforcement Agency operation.

Incredibly, the president and his wife were the only individuals hurt in the operation. None of Moïse’s direct security were harmed. Nor were any police. Reportedly, a dozen bullets riddled his body.

Moïse was extremely unpopular. Little known before former president Michel Martelly anointed him PHTK presidential candidate, important segments of the oligarchy had turned against Moïse. So had most of the right wing Haitian political establishment. During his mandate Moïse appointed seven different prime ministers, including a new one on Monday.

Previous interim prime minister, Claude Joseph, now claims he is in charge of the government, which is disputed by recently appointed (though not sworn in) prime minister Ariel Henry. The day after the assassination Joseph met the “Core Group”, which is a collection of foreign ambassadors (US, Canada, Spain, France, Germany, Brazil, UN and OAS) that wields immense power in Haiti. Afterwards the UN special envoy for Haiti, Helen La Lime, a former US State Department official, said Joseph will lead the country until a planned September election.

While much of the establishment had turned against Moïse, few among the impoverished masses ever supported him. Since massive anticorruption protests began in July 2018 a strong majority of Haitians have wanted Moïse to go. Protesters were enraged by the Petrocaribe corruption scandal in which the Moïse and Martelly administrations pilfered hundreds of millions of dollars. Between mid 2018 and late 2019 Moïse faced multiple general strikes, including one that shuttered Port-au-Prince for a month.

For a year and a half Moïse has been ruling by decree and his already limited constitutional legitimacy expired February 7. In response a new wave of mass protests began.

During his mandate there have been a number of horrific state-backed massacres. At the end of April Harvard’s International Human Rights Clinic and L’Observatoire Haïtien des crimes contre l’humanité published a report titled “Killing with Impunity: State-Sanctioned Massacres in Haiti”. It documents three “brutal attacks” by government-backed gangs that left 240 dead in neighborhoods known for resistance to Moïse.

The scope of the violence and lawlessness has worsened in recent weeks. Gang violence has engulfed entire neighborhoods of Port-au-Prince, displacing thousands of women and children. On June 29 reporter Diego Charles, activist Antoinette Duclair and 13 others were killed in a violent attack.

It’s unlikely Canada had a direct hand in Moïse’s assassination. In fact, Canadian officials were likely unhappy about the killing. But, that doesn’t mean Canadian hands aren’t all-around the crime scene.

Ottawa has strengthened the most regressive and murderous elements of Haitian society. In 2004 the Canadian government helped sabotage the most democratic election in Haitian history. 7000 elected officials were overthrown when the US, France and Canada destabilized and then ousted the elected president.

After backing a 26-month coup government that killed thousands, the US and Canada tried to block social democratic candidate René Préval from becoming president. That failed. But they undercut Préval when he attempted to raise the minimum wage and joined the subsidized Venezuelan oil program Petrocaribe. After the terrible 2010 earthquake they took advantage of the government’s weakness to sideline Préval and impose the PHTK in a rushed ‘election’.

In February I wrote about Canada’s role in enabling Haitian corruption and violence after it came to light that PHTK senator Rony Célestin stashed nearly $5 million in Montréal property. The story quoted Haitian-Canadian author Jean “Jafrikayiti” Saint-Vil who explained:

“The PHTK regime headed by Michel Martelly and his self-described ‘bandi legal’ (legal bandits), came to power thanks to fraudulent elections organized, financed and controlled by the foreign occupation force established in Haiti since the coup d’état of February 2004.

The planning meeting for the coup d’etat and putting Haiti under trusteeship was organized by Canadian Minister for La Francophonie Denis Paradis.

The Ottawa Initiative on Haiti [January 31-February 1, 2003] succeeded in overthrowing the legitimate President as well as 7,000 elected officials from the region’s most impoverished country. The elected officials were replaced by bandits such as ‘Senator’ Rony Célestin.”

Offering an even more stark way of understanding Canada’s relationship to violence in Haiti Saint-Vil asked, “Can you imagine [Hells Angels leader] Maurice ‘Mom’ Boucher and [serial killer] Carla Homolka installed as Senators in Canada by fraudulent elections led by a coalition of Haitian, Jamaican, Ethiopian diplomats in Ottawa?” Few Canadians would be happy with such an outcome, but it’s a troublingly apt description of US, Canadian and French policy in Haiti.

It may turn out that the CIA or another arm of the US government had a hand in Moïse’s assassination. But, it’s more likely Moïse was killed in an internal PHTK struggle over political power, drug routes, pillaging state resources, etc. Or maybe there was a dispute over some gang alliance or act of violence.

A presidential assassination in the middle of the night with the probable involvement of other elements of the government reflects that deterioration and criminal nature of the Haitian state. It’s the outgrowth of the US and Canada empowering the most corrupt and violent actors in Haiti.

Washington and Ottawa support the most retrograde elements of Haitian society largely out of fear of the alternative: a reformist, pro-poor, government that seeks out alternative regional arrangements.

It may be hard to believe, but that description is not far from the mark.