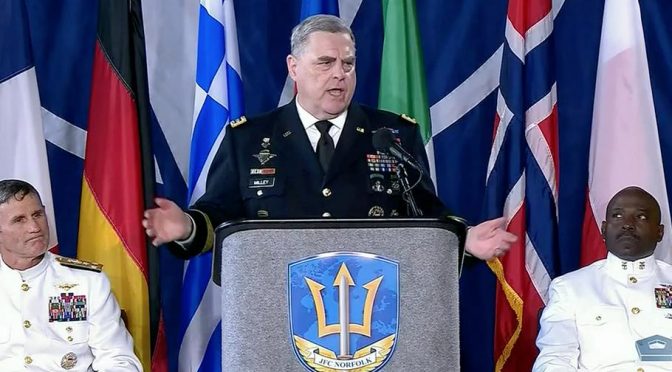 The new command was initially launched shortly after NATO’s Joint Support and Enabling Command was in Ulm, Germany in late 2019. Both commands at that time achieved initial operational capability (or initial operating capability). Joint Force Command – Norfolk is designed to expedite the deployment of troops and armor across the Atlantic; Joint Support and Enabling Command’s mission is to “speed up, coordinate and safeguard the movement of allied armour and infantry across European borders.” The two are thus integrally connected.

Their joint purpose is to move military personnel and equipment from the U.S. across the Atlantic Ocean, then from European ports across the continent to the Russian border. The recent DEFENDER Europe-21, the largest since the Cold Warwith 31,000 troops from 27 nations, activated the new system to expedite the transit of large military, including armored, units from the U.S. to the Russian border.

On July 15 General Milley addressed what the Defense Department described as assembled dignitaries on board the USS Kearsarge amphibious assault ship and was accompanied by the new Joint Force Command – Norfolk commander Vice Admiral Andrew Lewis. Lewis is also the commander of the U.S. Second Fleet. As with other NATO commands, its commander is simultaneously in charge of a U.S. command as well, as with U.S. European Command/Supreme Allied Commander Europe, U.S. Navy Sixth Fleet/Naval Striking and Support Forces NATO and U.S. Air Forces in Europe – Air Forces Africa/NATO’s Allied Air Command.

As the Pentagon story on the event states at the beginning and without equivocation, “If deterrence fails, the mission of the command is to fight and win the Battle of the Atlantic.”

In language that evokes the epochal if not the apocalyptic, Milley said:

“In my view, the world is entering a period of potential instability as some nations…and clearly terrorist groups and perhaps some rogue actors, are seeking to undermine and challenge the existing international order. They seek to weaken the system of cooperation and collective security that has been in existence for some time. The dynamic nature of today’s current environment is counterbalanced by an order that was put in place 76 years ago, at the end of World War II.”

The activities of terrorist groups are hardly capable of upsetting the entire post-World War II global order. The nations he alluded to are Russia and China. They can be no others. Every American unified combatant command has recently identified those two nations as the main focus of the Pentagon’s attention, in every part of the world, with Iran and North Korea branded second-tier regional threats.

He further frightened his listeners with the figure of 150 million lives lost between 1914 and 1945, that is from the beginning of World War I to the end of World War II, then issued this brutal assessment: “That is the butcher’s bill of great power war. That’s what this international order that’s been in existence for seven and a half decades, is designed to prevent. That’s what JFC-Norfolk is all about. It’s to prevent that outcome.”

No modesty there; no sense of perspective or proportion; no subtlety, nuance or intricacy; surely no attempt at statesmanship. Accept NATO’s role in dominating the international military and security realm or horrors unimaginable will be unleashed on humanity. But at the bottom of that Pandora’s box there isn’t hope.

He further stated that the creation of the North Atlantic Treaty Organization in 1949 was the “brainchild” of the Western leaders who waged and won World War II and established the post-war order. He intoned: “Without question, NATO has been the most successful military alliance in human history. And NATO is still very much a vital and critical part of our regional security framework, and indeed, our global security framework. In fact, in my view, it’s the linchpin that holds together the period of great power peace that we are now enjoying.”

Another factor that is of grave concern is the change in the character of war, the general said. Milley defined that bedrock of warfighting as “how we fight, the organizations we fight with and the technologies that we use.” The last time such a qualitative transformation in warmaking capabilities occurred was between the two world wars with the introduction (in World War I) and improvement of aviation, tanks and other armored vehicles, new naval technologies and other technological advancements – “radio, radar and more ” – to integrate the above.

He then elaborated further by stating that although the former belligerents in the First World War all possessed the same technology, only one – Germany – successfully developed, integrated and applied technological innovations: “Germany, combined those technologies, and the German way of war, and combine them to organizations and leader development in such a way that Nazi Germany was able to overrun Western Europe in 18 months. Other countries combined it in different ways. And they didn’t have success.”

That clearly appears to be citing the German model of the Third Reich as an exemplary one to be emulated. To leave no doubt, he added: “And I would tell you that the same thing is happening right this minute. There’s a whole set of technologies that are driving fundamental change.”

Notwithstanding his liberal use of the word peace in his address – as in armies with their weapons developed to kill people and destroy property and soldiers trained to kill only exist to bring peace to the world – he belied his own duplicity in the following statement:

“I would argue that the country that masters those technologies, combines them with their doctrine, develops their leadership to take maximum advantage of them, is likely going to have significant and perhaps even decisive advantage at the beginning of the next war.“

If more naked and brazen threats have been made in modern times by the top military commander of a major nation – and of the world’s military superpower at that – they’re unfamiliar to this writer.

“We have to maintain the readiness of the present, we have to modernize for the future. We are ready right now. Those who think we are not are mistaken. And any adversary that seeks to challenge the United States military resolve will do well to respect this military, and our alliances and NATO.”

With that language, why not dispense altogether with diplomacy, with the State Department, with embassies, with the United Nations, with international law? The world is a jungle and the savage with the most lethal, the most technologically-sophisticated weapons dominates it. That is the message and no other.