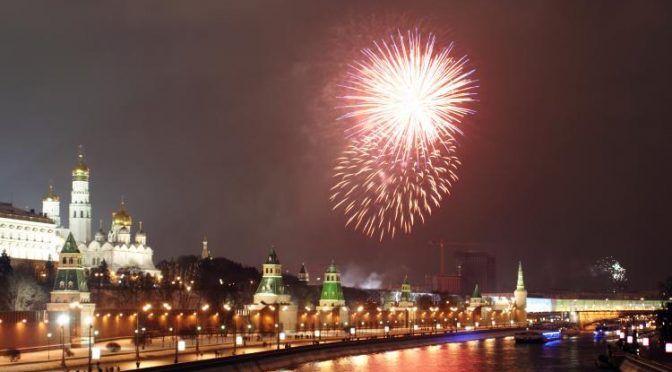 What Moscow is really asking for is to redraw the borders of influence between Russia and the West.

One of the most frequently asked questions about U.S.-Russian relations over the last few years has been “have we hit rock bottom?”.

No matter how bad things seem, about every six months a few Congressmen with questionable motivations come up with a new pack of sanctions or other threats to make the situation get just a bit worse.

After many years of this it seems as though there is always room for relations to somehow plummet even further down the dank shaft they are in. However, Washington may have run out of ideas and threats as both sides of Cold War 2.0 are set to meet around January 10th right after the holiday season in Russia officially ends to build a solid mutually approved deal so that hopefully U.S.-Russian relations can finally be exposed to daylight again.

From a Russian standpoint there is finally some cause for optimism due to the fact that they have chosen a logical hardline position and yet Washington, understanding it, has still agreed to discuss it.

Although American diplomats and politicians (like those in many countries) are very skilled at nodding their heads for a couple hours then just doing whatever the hell the want to give the illusion of sticking out an olive branch, this time the Russian position is so clear cut that if it were completely off the table Washington wouldn’t even bother participating.

They would be more likely to throw a PR hissyfit via the Mainstream Media accusing the Russians of X,Y, and Z, than listen to a position they find revolting for hours of negotiations. Essentially, the American side at least humoring Russia’s demands is a positive step for sure.

Ultimately the Russians want a Multipolar World Order in which they are one of the poles, for Washington this has been an absolutely unacceptable vision that is directly opposed to their Monopolar/Pax Americana. Small-minded clowns can say the problems between Russia and America are cultural misunderstandings or rooted in buzzwords like “Human Rights” but the real truth is rooted in these two competing visions for the Geopolitical layout of the 21st century.

Based on this desire to have a Multipolar World and avoid a WWIII scenario in the process, this is why the Russians have now issued their hardline stance of “no more NATO expansion”. According to this article by RT, the overall demand from Moscow is as follows…

“The talks, due to be held on January 10, will focus on two publicly released draft treaties that include a list of promises Russia wants to obtain from the US and NATO. As well as pledges that the bloc won’t expand eastwards, the proposals also include the end of Western cooperation with post-Soviet countries, the removal of US nuclear weapons from Europe, and the withdrawal of NATO troops and missiles away from the Russian border.”

Reading between the lines we can see that what Moscow is really asking for is to redraw the borders of influence between Russia and the West, which in the context of a Monopolar World is essentially demanding for it to be dismantled.

This means that if Washington at the very least agrees to the death of NATO expansion, and certainly if it stops supporting puppet regimes on former Soviet territory, then January 2022 will be the official birth month of a Multipolar World. It will be a great opportunity for the producers of collectable coins and stamps to cash in for sure.

Perhaps you see in these words naive optimism coming from an American deep behind the Russian lines who would benefit from having better relations between these great nations. When Biden came into office during that strange election cycle most experts expected a resurgence of the America of old, coming out guns blazing from a foreign policy standpoint.

The brief anomaly that was Trump’s four-year term with no new wars was surely going to end. But the Biden period has seen the sloppy retreat from Afghanistan, and the shift from fighting the “Global War on Terror” to dealing with Russia and China – essentially what Trump wanted to happen mostly minus the “Russia” part. The Global War on Terror which really defined the essence of the Pax Americana period has just up and vanished and this is not by chance or to woo the Russkies into a false sense of security.

Biden unblocking Nord Stream 2 to get the Russians to talk was a sign of weakness never before shown. The fact that the American side has read Russia’s demands for NATO expansion and influence on their former territory and not laughed, but agreed to discuss it is huge.

Syria and the Ukraine were supposed to lock Russia into two new “Vietnam” scenarios, the former turning out to be a relatively cheap victory for Moscow with Damascus doing the hard fighting and the latter never truly getting off the ground.

The various sanctions packages were so incremental that they actually gave the Capitalist (or State-Capitalist) Russian economy plenty of time to adapt and thrive under them. Now there seems to be nothing left but to threaten (again) to boot Russia from SWIFT, but even that is apparently beyond the means of Biden’s Washington. Things have become much different.

As you can see the “Russia Question” is much more difficult when the goofiness of a Khruschev-style Communist system is removed, America is in decline and Washington may be very willing to just “give the damn Russians” control over their traditional 1/7 of the world’s surface and be done with it.

The Russians, despite what CNN will tell you, have become ideologically inwardly focused and are not on the same mission of “Internationalism” that they were under Communism. Moscow will be happy to have its Soviet borders essentially restored, and have NATO’s goodies and America’s nukes pushed back from their new fancy sphere of influence.

At this point both sides would benefit from redrawing the map, meaning that it is very possible, and things in our world which have changed so much recently will yet again go through a restructuring process. January 2022 will be a very big month for Geopolitics.