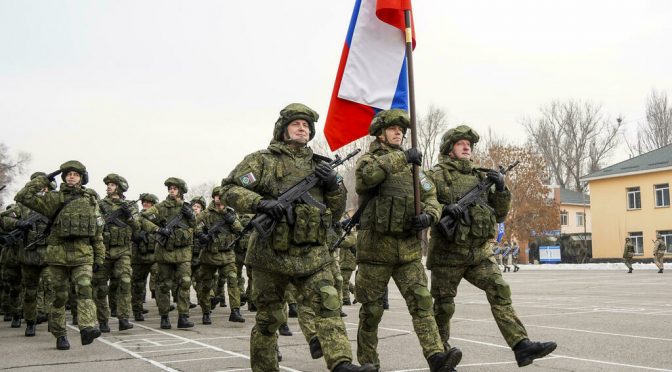 The US went into overdrive in propagating against the short Russian-led peacekeeping operation in Kazakhstan under the Collective Security Treaty Organization (CSTO) mechanism. The Wall Street Journal speculated whether “the Crisis in Kazakhstan [was] the Rebirth of the Soviet Union” and US Secretary of State Antony Blinken said on Friday that “one lesson of recent history is that once Russians are in your house, it’s sometimes very difficult to get them to leave.”

Blinken’s statement ended up being humiliated in yesterday’s announcement by Kazakh President Kassym-Jomart Tokayev that the CSTO troop pull-out would begin on Thursday. As a whole, the withdrawal will take less than two weeks since the peacekeepers already restored order in the Central Asian country in a swift manner.

In a tit-for-tat, the Russian Foreign Ministry said on its Telegram social media channel that

“If Antony Blinken loves history lessons so much, then he should take the following into account: when Americans are in your house, it can be difficult to stay alive and not be robbed or raped.”

It is recalled that the new year began in Kazakhstan with protests over rising LPG prices, leading to a dissolved government, destruction of infrastructure and 164 people reportedly killed, including one police officer that was beheaded. Stability and peace were only restored in Kazakhstan when CSTO finally intervened. The mission was so successful that it achieved its aims in only a few days and is already being decommissioned.

Despite the success of the intervention and Blinken still obviously angered by the Russian Foreign Ministry’s Saturday statement, he said on Sunday that the US has “real questions [to Kazakhstan] about why they felt compelled to call this organization that Russia dominates.” He added that “[Kazakhstan] should be able to deal with the protests peacefully. We’re asking for clarification on that.”

This is of course hypocritical considering that Kazakhstan called upon a bloc for assistance in which it is a member of and does not need to respond to the condescending demands made by the US’ top diplomat. Blinken’s statement reeks of contradictions when we consider how the US is conducting missions and occupying areas of Syria without permission from Damascus, invaded Iraq and Afghanistan without a UN mandate, and has troops deployed in Taiwan – an island that Beijing considers a “rebel province” and is recognized as a part of “One China.”

Rather, Washington attempted to piggyback off the unrest in Kazakhstan as the North American country wields very little influence in the region, especially after last year’s troop withdrawal from Afghanistan. In this way, the US could only resort to cheap propaganda tricks as there is not much they can do on the ground to force a Color Revolution in Central Asia like they did in Eastern Europe and the southern Caucasus.

Despite the misinformation emanating from the US to demonize Russia and CSTO, Kazakh authorities announced on Wednesday that 1,678 people were detained in the past 24 hours over their alleged participation in the violence that rocked the country, the worst since Kazakhstan gained independence from the Soviet Union in 1991. The additional 1,678 people being detained now brings the total number to about 12,000. More than 300 criminal investigations into mass unrest and assaults on law enforcement officers, including a brutal beheading, have been opened.

There is little doubt that the US would have preferred to see widespread chaos in Kazakhstan continue, especially as it would open a new pressure point on a large swathe of Russia’s border. Kazakhstan is also Russia’s main access point to the Central Asian states of Kyrgyzstan, Tajikistan and Uzbekistan. By removing a Russia-friendly government, the US would block Russia from reaching the resources and markets of Central Asia.

The US believed that the crisis in Kazakhstan would be an opportunity to overthrow a Russia-friendly government and install a liberal government that would be friendly to the West, or an Islamist Emirate like Afghanistan that would be a constant source of terrorism and instability for Russia. As said though, the US wields no real influence in Central Asia, and for this reason, it is left red-faced after audaciously predicting “a return of the Soviet Union” and that “Russian troops will never leave”.

This ultimately turned out to be false.