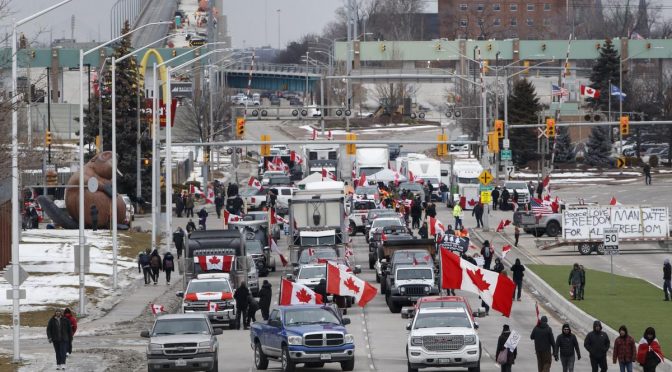 The fact that it’s ordinary people behind the Freedom Convoy, rather than professional activists, has caused alarm among the ruling class.

In the two weeks since the Freedom Convoy of Canadian truckers and their supporters began rallying in Ottawa to demand an end to all pandemic-related mandates and restrictions nationwide, it has become clear that this movement isn’t like other protest movements. And that’s a scary proposition for those in charge who thought that they’d manage and exploit this crisis on their own sweet time and schedule regardless of the actual science and reality on the ground.

There has long been an agenda to corral as many humans as possible unwittingly into a global dragnet through technological adoption. That’s what the revelations of National Security Agency whistleblower Edward Snowden were about back in 2013. A technological panopticon provides those in charge with the ability to monitor and ultimately control or sanction dissidents or outliers as the state pursues the self-serving agenda of a select few. Algorithms that exploit this massive online presence enable the state to accurately craft propaganda to be deployed to vilify them in the eyes of the general population, while portraying the state as the great protector — all while selling citizens out to the interests of a select few elites. Essentially, people are manipulated into arguing against their own good.

For those citizens who aren’t seduced by the mere convenience of technology or the narcissistic allure of social media, the fear of terrorism or of Covid-19 more actively encouraged onboarding to these dragnets. And that was before it was flat-out mandated with government-issued QR code health and vaccine passes that linked directly to your identity.

But then a bunch of truckers noticed that the threat of authoritarianism in Canada and elsewhere was closer than it may appear in their mirrors. And these essential workers decided to park their essential tools until officials stopped treating essential freedoms like they were negotiable.

Because Canadian mainstream media is so severely lacking in truly contradictory debate and diversity of thought, the protests risked sparking an unprecedented new awareness for those who had been force-fed government talking points while they may have already been starting to wonder why their entourage was triple-jabbed and still catching the virus. They were probably beginning to question the real value of the sacrifices that they were forced by government into making over the past two years under the illusion of safety.

Into this mix comes a group of people who aren’t paid activists or troublemakers, but rather everyday people with real jobs — and ‘essential’ ones at that, as previously hailed by the governments themselves. This makes the truckers a different breed of dissenters from Black Lives Matters, Antifa, or French Yellow Vest protesters. And that explains why the rhetorical big guns are now being deployed against them. The truckers, by demanding that life go back to exactly the way it was before governments started instrumentalizing the pandemic, could undermine any agenda to exploit the crisis for globalist advancement. This would especially be the case if the Freedom Convoy movement spread around the world, as it’s beginning to do. Here in France, for example, convoys departing from various cities are reportedly scheduled to arrive in Paris beginning on February 11.

Former Bank of Canada and Bank of England governor, Mark Carney, a dual citizen of Ottawa and Globalistan, wrote in a recent Globe and Mail newspaper opinion piece: “[B)y now anyone sending money to the convoy should be in no doubt: You are funding sedition. Foreign funders of an insurrection interfered in our domestic affairs from the start. Canadian authorities should take every step within the law to identify and thoroughly punish them. The involvement of foreign governments and any officials connected to them should be identified, exposed and addressed.”

Unlike previous environmental protests that have raged in Canada to the detriment of the country’s future energy independence, and been backed by US-based think-tanks funded by American business interests close to Washington elites — all of which have apparently escaped Carney’s attention or interest — truckers don’t actually require ‘foreign funding’. They have actual jobs that pay quite well.

You’d think he’d know that, given his illustrious background as an expert in money. But good luck trying to exploit the ‘foreign bogeyman’ trope and attempting to find the scapegoat that you’re looking for. Carney is concerned about the ‘occupation’ by protesters, who are merely fighting against the government blockade of citizens’ lives for the past two years. And a bonus L-O-L for his effort to portray protests to regain basic freedoms as some kind of attempt to overthrow the government of Canada. Perhaps someone could provide him with a paper bag before he passes out?

Here’s your ground truth in Ottawa: “More than 100 Highway Traffic Act and other ‘Provincial Offence Notices’ were issued for offenses including excessive honking, driving the wrong way, defective muffler, no seat belt, alcohol readily available and having the improper class of driving license,” according to a Fox News report.

Well, you know what they say. Every hardcore coup d’état starts with a seat belt offense, right?

Meanwhile, US Homeland Security, already apparently attempting to ward off any potential future pushback against its own unpopular agenda, issued an advisory on February 7 conflating terrorism with “the proliferation of false or misleading narratives, which sow discord or undermine public trust in U.S. government institutions.” Would that include dissent against any government-approved narrative around the pandemic and related liberticidal measures?

Restrictions, mandates, and ‘vaccine passports’ in two Canadian provinces — Alberta and Saskatchewan — are now ending, premiers of both jurisdictions announced on February 7.

The rest of the world now runs the risk of these trucker movements gaining momentum, before the restrictions and mandates can allow for the full implementation of a lasting solution of tracking and surveillance capable of monitoring populist blowback to government insanity.

The rally race between truckers and globalists is on! And with nothing less than democracy and freedom at stake.

Rachel Marsden is a columnist, political strategist and host of an independently produced French-language program that airs on Sputnik France. Her website can be found at rachelmarsden.com

2 thoughts on “Why the Freedom Convoy is Provoking Unprecedented Hysteria”