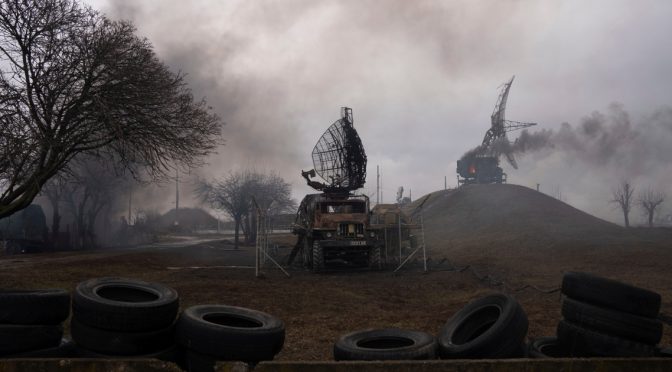 Various reports from the ground have indicated that the first wave of Russian air and ground attacks have effectively decapitated Ukraine’s ability to deter any further incursions of the Russian military into Kiev.

A few minutes ago, the Marine Unit of 36th Brigade of Ukrainian Forces Surrenders, have asked the DPR for a corridor to enter the Republic – Russian Defence Ministry.

“Overall, as a result of strikes by the Russian armed forces, 83 ground-based objects of Ukrainian military infrastructure have been knocked out of action. Since the start of the military operation, two Su-27 and two Su-24 planes, one helicopter and four Bayraktar TB-2 drones of the Ukrainian armed forces have been shot down,” he said.

Electronic Warfare was key to these early successes, as it disabled the Ukrainian military to communicate between its branches and coordinate their responses to the Russian invasion coming true.

Of course, the Russian MoD was not sending troops “sequentially”, but simultaneously in all pre-identified Nazi locations throughout the country by air, effectively defeating the planned cutting off of supply lines by knocking down bridges, and road networks.

The First Strike Phase has effectively rendered both the Ukrainian Air Force and Navy dead, and unable to response to anything the Russian forces do inside Kiev and elsewhere.

Earlier reports have already indicated that some elements of the local military have already laid down their arms, and defected to the independent republics East of Ukraine, while hard core Nazis manning military infrastructures are being shot on sight.

It is also evident that Russian forces are not bombing civilian positions in Kiev, as parroted by Western media. What the pictures on the ground are showing is that Ukrainians are free to move wherever they like away from the conflict.

Noticeably, Zelenky has already expressed his willingness to discuss about a “neutral Ukraine” as telegraphed earlier by Putin himself. This is due to the failure of the West to grant Kiev its long-sought NATO membership, preferably as quick as Putin’s government recognition of the independence and autonomy of Donetsk and Lugansk republics.

But it is evident by now that all the Western warmongers can only do is to pay lip service to the flight of the Nazis that ruled Kiev for the last 8 years, or so.

This doesn’t mean, however, that a potential false flag operation that could be a substitute to the planned Chernobyl Nuclear Plant redux is not possible anymore.

Elsewhere, in Turkey, Erdogan has already expressed his willingness to use that newly Russian delivered S-400 SAM System to protect the country from any spillover of the ongoing “peacekeeping operation” in Ukraine. This means that Turkey won’t be heeding the call made by Zelensky for the former to impose a naval blockade against Russian naval ships in the Black Sea, which should give the Russian military the option to surround Ukraine from most directions, most specifically from the Belarusian border to the Black Sea.

That’s why some Western analysts were suggesting earlier that Kiev should do an insurgency type of response, i.e., guerilla tactics, against the potential Russian invasion, which could be possible considering that Zelenky himself has just announced that his government is distributing arms and ammunitions to all civilians willing to stay and fight against the Russians.

This scenario will emulate the deliberate and prolonged agony of the people in Vietnam, where the US intelligence and military command posts were deliberately avoiding operations that could end the war as early as possible. The underlying goal, of course, was to sell and expend as much war materiel as possible to feed the war industry monsters running the show.

It is, therefore, up to the people of Ukraine to seize the opportunity to cleanse their country from the Nazi scourge, which toppled the legitimate and democratically elected Viktor Yanukovych’s government back in 2014, with great assistance from the CIA through the US State Department, and should return to post-Maidan scenario, with military neutrality as the best position to take.

Western recognition of any such neutral government is not important anymore as the world embraces multipolarity as the best way to ensure peace and common prosperity, and most importantly, to insulate a country from the Western financial and moral bankruptcy.

So, with all the Nazi-NATO facilities inside Ukraine rendered dysfunctional right now, US and EU citizens should brace themselves once again for the influx of Nazi refugees coming from Ukraine into their countries soon, just like what had actually happened in the immediate aftermath of the Nazi defeat in Berlin by the Soviets.

Instead of containing Russia, the West has effectively forced the Russians to contain Ukraine with only 2 days of “special operation”, a far cry from the 20-year US military occupation of Afghanistan.

One thought on “Phase One Completed: Nazi Controlled Faction of the Ukrainian Military Decapitated”