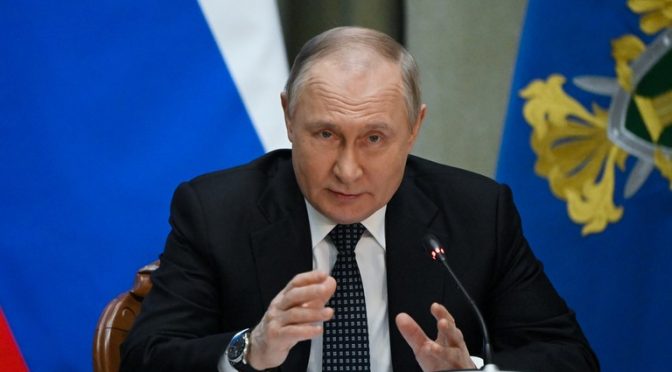 Russian President Vladimir Putin has warned outside forces against interfering in the Ukrainian conflict, promising a “lightning-speed” response to such actions, with the use of Moscow’s most advanced weaponry. President Putin warns that Russia won’t hesitate to use ‘weapons that no other country’ possesses to defend itself.

Putin was speaking to lawmakers in Moscow on Wednesday.

“If someone decides to intervene in the ongoing events from the outside and create unacceptable strategic threats to us, they should know that our response to those oncoming blows will be swift, lightning-fast,” he explained.

“We have all the tools to do this. Tools that no one except us can brag about. But we’re not going to brag. We’ll use them if such a need arises,” the president added, without specifying which tools could be deployed.

Russian authorities have already made all the necessary decisions to prepare for such a response, he added.

Last week, Moscow successfully tested its state-of-the-art RS-28 Sarmat inter-continental ballistic missile. The new nuclear-capable weapon can carry several Avangard hypersonic gliders, which are said to be able to bypass any existing air defenses due to their extreme speed and ability to make constant maneuvers during their flight.

Unlike Russia, the US and its NATO allies currently have no hypersonic weapons in service. For now, at least.

Western countries have been actively supplying Kiev with weapons, including anti-tank and anti-aircraft missile systems, armored vehicles and howitzers, since the start of the conflict with Russia. They have also imposed harsh sanctions aimed at reducing Russia’s ability to fund its military campaign.

However, Washington has so far ruled out NATO boots on the ground or a no-fly zone over Ukraine, citing fears of a direct conflict with Russia.

Moscow has repeatedly slammed the deliveries of lethal aid to Ukraine, saying they only destabilize the situation and hamper the prospects of peace. On Tuesday, Foreign Minister Sergey Lavrov accused NATO of “essentially going to war with Russia through a proxy and arming that proxy.”

Russia attacked its neighbor in late February, after Ukraine’s refusal to implement the terms of the Minsk agreements, first signed in 2014, and Moscow’s eventual recognition of the Donbass republics of Donetsk and Lugansk. The German- and French-brokered protocols were designed to give the breakaway regions special status within the Ukrainian state.

The Kremlin has since demanded that Ukraine officially declare itself a neutral country and provide guarantees that it will not join NATO. Ukraine views the Russian offensive as an unprovoked act of war, and has denied claims it was planning to retake the two republics by force.