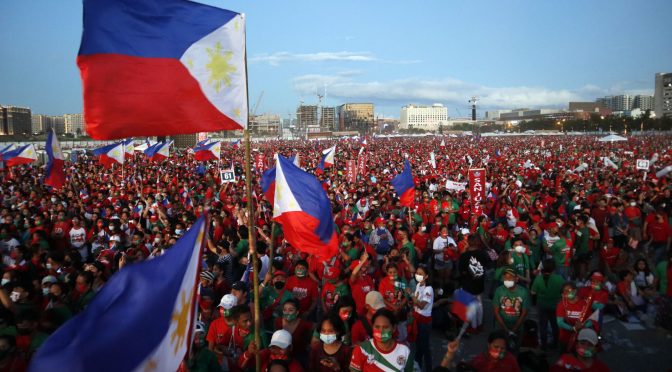 THE real, authentic expression of the people’s will occurs today. Unlike the bogus ones in 1986 and 2001 which were a Machiavellian mix of mobs and the threat of the use of force, this people power today will be expressed through secret ballots cast by at least 60 percent of voting citizens, who after more than a year of careful deliberation and relentless black propaganda by the Yellow elite, choose Ferdinand “Bongbong” Marcos Jr. as their president.

The official Comelec results showed him the winner with 54 percent of votes. The US cleverly engineered a massing of warm bodies in front of Camp Crame with the people mostly there not demanding to topple Marcos but as Cardinal Sin told them, to prevent the bloody take-out of the mutineers holed up there.

The Communist Party, on the other hand, called for a full mobilization of their forces at its favorite target since the late 1960s, Malacañang, and were set to ram the gates — to be slaughtered by the Presidential Security Group, headed by Gen. Fabian Ver’s two sons. Whether fearful of his life or, as he would claim later, to prevent bloodshed, Marcos rightly chose to vacate Malacañang, to move to his home province of Ilocos Norte, and the US offered to airlift him. After Cory Aquino was told about this, she demanded for Marcos to be shanghaied to Hawaii.

C’mon, is that People Power?

These facts certainly don’t seem to make it an event that could be abstracted as the majority of Filipinos in the span of a few days rising up to topple a dictator. The Solid North and Central Visayas (Imelda’s region) and only recently revealed, southernmost Mindanao, certainly weren’t participants in the metropolitan Manila-based “EDSA 1.”

EDSA 2 that toppled Joseph Estrada was due to three things: 1) the power of the Yellow political forces, including the Church, which was built up through two Yellow presidents (Cory and Ramos); 2) the tremendous power of the Aquino-controlled media; and 3) Erap’s bungling, as he was in a stupor due to a mix of valium and Petrus red wine, that he simply gave up and left Malacañang. That the toppling of Erap was a fluke is evident in the fact that his surrogate, the actor Fernando Poe Jr., with zero political experience and similar level of intelligence, very nearly won the 2004 elections.

Why do I say today will be the real People Power phenomenon?

Most likely 64 percent to as high as 70 percent of Filipinos will vote BBM into power, based on polls and incorporating other factors not captured by polls, such as command votes for BBM (by the INC (Iglesia ni Cristo) among others) and bandwagon thinking among Filipinos.

This will be in total defiance of the elites who embrace the Yellow world view, the Church, American and international media, and the most powerful and most meddlesome nation on earth, the US — all of which for various, different reasons have thrown everything they can at BBM.

Unlike the Finks, who are projecting non-existent qualifications on Leonor Robredo, I am forecasting BBM’s win based on empirical evidence. First is the fact that surveys done by different polling firms, even by the anti-Marcos Social Weather Stations, all show 54 percent to 64 percent of Filipinos will vote for him today. Opinion surveying is a science, the polling firms’ methodology is rigorous and valid, and only a crackpot would claim their findings are erroneous.

Secondly, data from surveys explain why BBM will win by a majority. His win will mainly be because of the conjunction of two phenomena. The Yellows (now Finks) refuse to see these phenomena that they have resorted to cockamamie theories that the BBM camp has effectively spread lies in social media, or that the youth voters have no recollection of martial law. (That social media has become dominant in people’s voting choices has absolutely no empirical basis at all. There is roughly the same percentage of pro-BBM voters in all age cohorts.)

One is the fact that despite the virulent anti-Duterte coverage of traditional Yellow papers as the Philippine Daily Inquirer and the Philippine Star and by US-funded internet news outfits as Rappler and Vera Files, polls show that Filipinos’ overwhelmingly support President Duterte and see his administration to be a huge success. BBM in the past six years has been very supportive of Duterte and has not uttered a single public criticism of him. Robredo, on the other hand, has spent the past six years criticizing his every move.

While Duterte has not publicly endorsed BBM (cleverly I think), he is perceived as his political and governance successor, and has even recruited his only daughter Sara Duterte-Carpio as his running mate.

Based on a private poll from March 14 to 26 of 3,600 respondents, 73 percent of Filipinos are satisfied with Duterte’s administration and only 22 percent think it has been bad. Quite obviously, that 73 percent will vote for the candidate allied with him, or the one who appears will follow the kind of governance he has undertaken the past six years — BBM. The 22 percent against Duterte’s administration is basically the proportion of Filipinos reported by different surveys at different times as those who will vote for Robredo.

The second factor pushing for BBM’s victory is that despite the massive propaganda by the Yellows’ propaganda machines through three Yellow administrations, and also by the US, the majority of Filipinos see the martial law regime of Ferdinand Marcos Sr. as, as one survey put it, “a time of low prices of commodities, discipline in the country, and advancement in infrastructure and transportation.”

The votes for BBM thus mean the majority of Filipinos judging that martial law wasn’t the “Dark Age” the Yellows, and especially Robredo, have been shrieking against. Such will be done after years of being bombarded by Finks’ black propaganda against BBM and mythologizing Robredo to cartoonish and then religious levels.

The third big factor for BBM’s lead is his personality itself, which many think make him an ideal president: articulate, knowledgeable, diplomatic and not quarrelsome, intelligent and experienced in government — qualities that Robredo definitely lacks. If BBM for instance was as arrogant as Isko Moreno, or as inarticulate in English as Manny Pacquiao, as vacuous and inexperienced as Robredo, it would have been a steep uphill climb to the presidency, even with the two political titans pushing him up.

There has never been in our history two viewpoints dominant among our people — that the Duterte and Marcos Sr. regimes were good for the country — that are the powerful engines for the victory of a presidential candidate. No amount of gimmicks — faking crowds in rallies, ridiculous imaging attempts, endorsements by celebrities and by whatever groups — can stop these engines.

Defying the views and wishes of the elite and of the US hegemon, Filipinos today will be demonstrating real people power, which, if we wish to remain a democracy, can only be done through the polling precincts.

Rigoberto D. Tiglao is a Filipino diplomat and writer. He was formerly the Ambassador to Cyprus and Greece, as appointed by then President Gloria Macapagal-Arroyo.

A Marcos is back in the Philippine presidency, effectively defeating the CIA-Vatican myth of EDSA people power revolution in 1986!

This also proves that the US-Vatican presidential candidate VP Leni Robredo didn’t win in the 2016 vice presidential election, the real results of which were persistently covered up by the Supreme Court during the entire time that the legal protest launched by Bongbong Marcos was heard and deliberated, further reinforcing the public belief that it was heavily manipulated by the George Soros’ owned Smartmatic electoral system, as independent evidence has shown through Atty. Glen Chong’s efforts.

The underlying reason of the people’s choice is the possible return of the Philippine assets mentioned in the Last Will and Testament of the late strongman Ferdinand E. Marcos allocating 80% of the asset under his family’s control to a foundation specifically for the purpose of the full industrialization of the country.

Said Marcos Foundation assets are only 30% of the entire historical assets of the Kingdom of Maharlika (the original name of the group of islands now known as the Philippines after King Philip of Spain), all of which are also being claimed by the Vatican.


This explains why the Catholic Church perpetually interfere in the political affairs of the country.