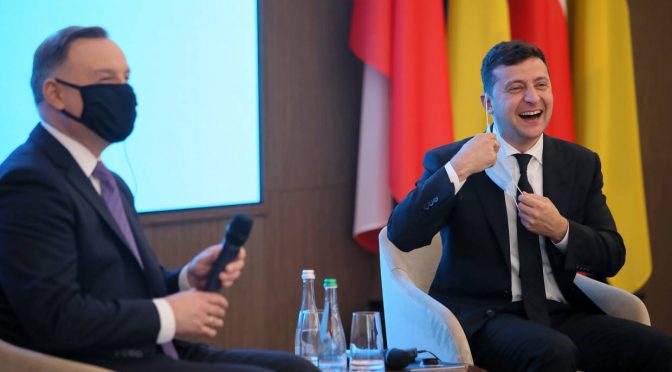 According to testimonies. regular Polish troops are inside Ukraine fighting against the Russian army.

At the end of World War I, the Ukrainian government made an alliance with Poland against Russia. Contrary to popular belief, its aim was not to recover the piece of territory which had been annexed by the USSR, but to ward off Russian influence in Central Europe. It consequently donated Western Galicia to Poland in retribution for its commitment against Moscow (Treaty of Warsaw, 1920). Then it placed the Ukrainian army under Polish command. WWI ended with the defeat of both Poland and Ukraine.

Current Ukrainian President Volodymyr Zelensky is pursuing exactly the same strategy. He made an alliance with Poland, pledging to hand over eastern Galicia in exchange for its commitment against Russia. History always repeats itself, to the detriment of the Ukrainian people.

It is impossible to grasp what is currently happening in Ukraine without knowing the history of the Ukrainian “integral nationalists” and their successive alliances with Poland and the Nazi Reich. Contrary to mainstream media claims, Russia is not fighting Ukraine, but the “integral nationalists” that it refers to as “neo-Nazis”.

Poland is a NATO member, but article 5 of the North Atlantic Treaty does not apply when the conflict is instigated by one of its members. Thus Turkey successively invaded Northern Cyprus, Iraq and Syria without being able to seek help from its allies invoking Article 5.

One thought on “Poland Goes to War with Russia”