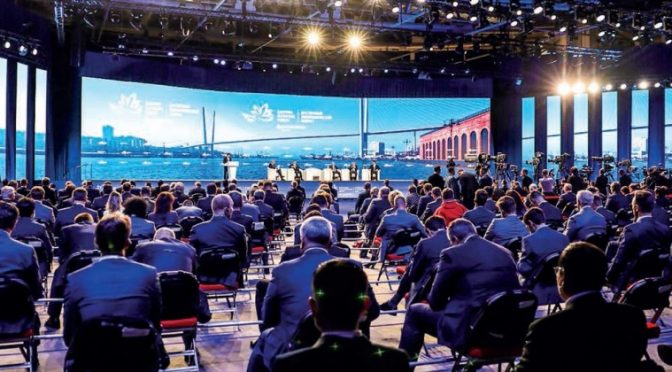 The Eastern Economic Forum (EEF) in Vladivostok is one of the indispensable annual milestones for keeping up not only with the complex development process of the Russian Far East but major plays for Eurasia integration.

Mirroring an immensely turbulent 2022, the current theme in Vladivostok is ‘On the Path to a Multipolar World.’ Russian President Vladimir Putin himself, in a short message to business and government participants from 68 nations, set the stage:

“The obsolete unipolar model is being replaced by a new world order based on the fundamental principles of justice and equality, as well as the recognition of the right of each state and people to their own sovereign path of development. Powerful political and economic centers are taking shape right here in the Asia-Pacific region, acting as a driving force in this irreversible process.”

In his speech to the EEF plenary session, Ukraine was barely mentioned. Putin’s response when asked about it: “Is this country part of Asia-Pacific?”

The speech was largely structured as a serious message to the collective west, as well as to what top analyst Sergey Karaganov calls the “global majority.” Among several takeaways, these may be the most relevant:

In a nutshell: Asia is the new epicenter of technological progress and productivity.

No more an ‘object of colonization’

Taking place only two weeks before another essential annual gathering – the Shanghai Cooperation Organization (SCO) summit in Samarkand – it is no wonder some of the top discussions at the EEF revolve around the increasing economic interpolation between the SCO and the Association of Southeast Asian Nations (ASEAN).

This theme is as crucial as the development of the Russian Arctic: at 41 percent of total territory, that’s the largest resource base in the federation, spread out over nine regions, and encompassing the largest Special Economic Zone (SEZ) on the planet, linked to the free port of Vladivostok. The Arctic is being developed via several strategically important projects processing mineral, energy, water and biological natural resources.

So it’s perfectly fitting that Austria’s former foreign minister Karin Kneissel, self-described as “a passionate historian,” quipped about her fascination at how Russia and its Asian partners are tackling the development of the Northern Sea Route: “One of my favorite expressions is that airlines and pipelines are moving east. And I keep saying this for twenty years.”

Amidst a wealth of roundtables exploring everything from the power of territory, supply chains and global education to “the three whales” (science, nature, human), arguably the top discussion this Tuesday at the forum was centered on the role of the SCO.

Grigory Logvinov, the SCO’s deputy secretary general, stressed how the economic, political and scientific potential of players comprising “the center of gravity” for Asia – over a quarter of the world’s GDP, 50 percent of the world’s population – has not been fully harvested yet.

Kirill Barsky, from the Moscow State Institute of International Relations, explained how the SCO is actually the model of multipolarity, according to its charter, compared to the backdrop of “destructive processes” launched by the west.

And that leads to the economic agenda in the Eurasian integration progress, with the Russian-led Eurasia Economic Union (EAEU) configured as the SCO’s most important partner.

Barsky identifies the SCO as “the core Eurasian structure, forming the agenda of Greater Eurasia within a network of partnership organizations.” That’s where the importance of the cooperation with ASEAN comes in.

Barsky could not but evoke Mackinder, Spykman and Brzezinski – who regarded Eurasia “as an object to be acted upon the wishes of western states, confined within the continent, away from the ocean shores, so the western world could dominate in a global confrontation of land and sea. The SCO as it developed can triumph over these negative concepts.”

And here we hit a notion widely shared from Tehran to Vladivostok:

Eurasia no longer as “an object of colonization by ‘civilized Europe’ but again an agent of global policy.”

Sun Zuangnzhi from the Chinese Academy of Social Sciences (CASS) elaborated on China’s interest in the SCO. He focused on achievements: In the 21 years since its founding, a mechanism to establish security between China, Russia and Central Asian states evolved into “multi-tiered, multi-sector cooperation mechanisms.”

Instead of “turning into a political instrument,” the SCO should capitalize on its role of dialogue forum for states with a difficult history of conflicts – “interactions are sometimes difficult” – and focus on economic cooperation “on health, energy, food security, reduction of poverty.”

Rashid Alimov, a former SCO secretary general, now a professor at the Taihe Institute, stressed the “high expectations” from Central Asian nations, the core of the organization. The original idea remains – based on the indivisibility of security on a trans-regional level in Eurasia.

Well, we all know how the US and NATO reacted when Russia late last year proposed a serious dialogue on “indivisibility of security.”

As Central Asia does not have an outlet to the sea, it is inevitable, as Alimov stressed, that Uzbekistan’s foreign policy privileges involvement in accelerated intra-SCO trade. Russia and China may be the leading investors, and now “Iran also plays an important role. Over 1,200 Iranian companies are working in Central Asia.”

Connectivity, once again, must increase: “The World Bank rates Central Asia as one of the least connected economies in the world.”

Sergey Storchak of Russian bank VEB explained the workings of the “SCO interbank consortium.” Partners have used “a credit line from the Bank of China” and want to sign a deal with Uzbekistan. The SCO interbank consortium will be led by the Indians on a rotation basis – and they want to step up its game. At the upcoming summit in Samarkand, Storchak expects a road map for the transition towards the use of national currencies in regional trade.

Kumar Rajan from the School of International Studies of the Jawaharlal Nehru University articulated the Indian position. He went straight to the point: “India wants a 21st Asian century. Close cooperation between India and China is necessary. They can make the Asian century happen.”

Rajan remarked how India does not see the SCO as an alliance, but committed to the development and political stability of Eurasia.

He made the crucial point about connectivity revolving around India “working with Russia and Central Asia with the INSTC” – the International North South Transportation Corridor, and one of its key hubs, the Chabahar port in Iran: “India does not have direct physical connectivity with Central Asia. The INSTC has the participation of an Iranian shipping line with 300 vessels, connecting to Mumbai. President Putin, in the [recent] Caspian meeting, referred directly to the INSTC.”

Crucially, India not only supports the Russian concept of Greater Eurasia Partnership but is engaged in setting up a free trade agreement with the EAEU: Prime Minister Narendra Modi, incidentally, came to the Vladivostok forum last year.

In all of the above nuanced interventions, some themes are constant. After the Afghanistan disaster and the end of the US occupation there, the stabilizing role of the SCO cannot be overstated enough. An ambitious road map for cooperation is a must – probably to be approved at the Samarkand summit. All players will be gradually changing to trade in bilateral currencies. And creation of transit corridors is leading to the progressive integration of national transit systems.

Let there be light

A key roundtable on the ‘Gateway to a Multipolar World’ expanded on the SCO role, outlining how most Asian nations are “friendly” or “benevolently neutral” when it comes to Russia after the start of the Special Military Operation (SMO) in Ukraine.

So the possibilities for expanding cooperation across Eurasia remain practically unlimited. Complementarity of economies is the main factor. That would lead, among other developments, to the Russian Far East, as a multipolar hub, turning into “Russia’s gateway to Asia” by the 2030s.

Wang Wen from the Chongyang Institute for Financial Studies stressed the need for Russia to rediscover China – finding “mutual trust in the middle level and elites level”. At the same time, there’s a sort of global rush to join BRICS, from Saudi Arabia and Iran to Afghanistan and Argentina:

B. K. Sharma from the United Service Institution of India got back to Spykman pigeonholing the nation as a rimland state. Not anymore: India now has multiple strategies, from connecting to Central Asia to the ‘Act East’ policy. Overall, it’s an outreach to Eurasia, as India “is not competitive and needs to diversify to get better access to Eurasia, with logistical help from Russia.“

Sharma stresses how India takes SCO, BRICS and RICs very seriously while seeing Russia playing “an important role in the Indian Ocean.” He nuances the Indo-Pacific outlook: India does not want Quad as a military alliance, privileging instead “interdependence and complementarity between India, Russia and China.”

All of these discussions interconnect with the two overarching themes in several Vladivostok roundtables: energy and the development of the Arctic’s natural resources.

Pavel Sorokin, Russian First Deputy Minister of Energy, dismissed the notion of a storm or typhoon in the energy markets: “It’s a far cry from a natural process. It’s a man-made situation.” The Russian economy, in contrast, is seen by most analysts as slowly but surely designing its Arctic/Asian cooperation future – including, for instance, the creation of a sophisticated trans-shipment infrastructure for Liquified Natural Gas (LNG).

Energy Minister Nikolay Shulginov made sure that Russia will actually increase its gas production, considering the rise of LNG deliveries and the construction of Power of Siberia-2 to China: “We will not merely scale up the pipeline capacity but we will also expand LNG production: it has mobility and excellent purchases on the global market.”

On the Northern Sea Route, the emphasis is on building a powerful, modern icebreaker fleet – including nuclear. Gadzhimagomed Guseynov, First Deputy Minister for the Development of the Far East and the Arctic, is adamant: “What Russia has to do is to make the Northern Sea Route a sustainable and important transit route.”

There is a long-term plan up to 2035 to create infrastructure for safe shipping navigation, following an ‘Arctic best practices’ of learning step by step. NOVATEK, according to its deputy chairman Evgeniy Ambrosov, has been conducting no less than a revolution in terms of Arctic navigation and shipbuilding in the last few years.

Kniessel, the former Austrian minister, recalled that she always missed the larger geopolitical picture in her discussions when she was active in European politics (she now lives in Lebanon): “I wrote about the passing of the torch from Atlanticism to the Pacific. Airlines, pipelines and waterways are moving East. The Far East is actually Pacific Russia.”

Whatever Atlanticists may think of it, the last word for the moment might belong to Vitaly Markelov, from the board of directors of Gazprom: Russia is ready for winter. There will be warmth and light everywhere.”

One thought on “Asia’s Future Takes Shape in Vladivostok, the Russian Pacific”