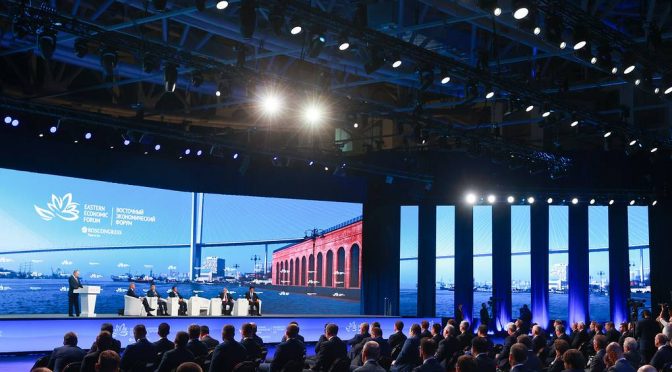 Russian President Vladimir Putin told the Eastern Economic Forum (EEF) in Vladivostok that there should be a multipolar world order that should not be based on the ‘diktat’ of a single nation, he said, referring to the United States.

Most Asian leaders share his view, according to speeches by forum guests, which means Washington would fail to make Moscow a rogue state internationally. China, India, Indonesia and smaller countries confirmed their intentions to boost cooperation with Russia. However, as a speech by Armenian Prime Minister Nikol Pashinyan indicated, some of them fear the situation in Ukraine would prevent Russia from taking an active part in settling international crises. And even friendly nations would now demand economic concessions from Russia.

Li Zhanshu, the chairman of the Standing Committee of the National People’s Congress of China, said at the forum that Beijing was ready to join projects to develop infrastructure, healthcare and education in Russia’s Far East. In his video address to the EEF, Indian Prime Minister Narendra Modi said his country had invested large funds in Russia’s pharmaceutical and diamond industries and called for expanding ties in energy and in the Arctic.

Myanmar’s Prime Minister Min Aung Hlaing, who is also the commander-in-chief of the country’s defense services, called Putin a world leader and stressed that Russia was seeking stability across the globe. He criticized the United States for weaponizing the dollar and called for the wider use of the ruble, the yuan and the rupiah in trade.

Director of Moscow State University’s Institute of Asian and African Studies Alexey Maslov, who also attended the forum, told Nezavisimaya Gazeta that Moscow could rely on what he said was an emerging coalition of China, India, Indonesia, Vietnam, Malaysia and Mongolia. However, in the coalition, there are countries who have been urging Russia to invest. “Myanmar and Mongolia would like Russia to invest in large national projects.

India, China and Malaysia go beyond bilateral contacts to call for a new system of international relations in trade, while Li Zhanshu seeks to expand economic and cultural cooperation with Russia. This, I guess, may prompt Chinese companies that have so far abstained from entering Russia to do so. Or old players may come under different names, like Huawei or Xiaomi. Chinese carmakers are expected to come to the Russian market, hi-tech businesses may be localized in Russia’s Far East, and joint ventures may be established there. Before, China used to sit and wait for fear of sanctions or a reaction from other countries,” Maslov concluded.

And though not a single one would support Russia fully, Moscow’s partners at the forum spoke against the sanctions and the unipolar world, largely echoing Russia’s stance.

Russian holders of Schengen visas for a short stay will not be able to cross into the EU from Baltic countries, Latvian Foreign Minister Edgars Rinkevics said on Wednesday. According to Latvia’s top diplomat, the restrictions would target airports, as well as land crossings, and, perhaps, maritime borders, while cargo deliveries and certain categories of people will be exempt from the ban, which, Rinkevics said, would come into effect within 10 days.

Dmitry Belik from the State Duma International Affairs Committee told Izvestia that the initiative would mostly hurt the regional economy. He warned Russia would respond appropriately to European nations, but the goal would not be to punish or mount any obstacles to European citizens. Federation Council Deputy Speaker Konstantin Kosachev agrees. In an interview with Izvestia, he said the response measures were being discussed, and opinions differed.

“I’d consider it wrong to target citizens arriving in Russia for tourism, education or commercial purposes. I also consider the corresponding decisions by the EU drastically incorrect.” According to the senator, a tit-for-tat response from Russia would be too much, and Moscow’s retaliatory measures should be aimed against people who formulate such a policy, rather than those who are victimized by that.

One way or another, a new stage has dawned on the history of the Schengen agreement dating back to 1985. So far, all Schengen member countries have pursued a common policy to third states, and a foreigner with a Schengen visa could travel freely across the entire zone, but now the situation will change.

A source in Russia’s travel industry told Kommersant on conditions of anonymity that since July 15 8,000-10,000 Russian nationals have been crossing the Russian border with Latvia, Estonia and Finland daily, with 3,000 to 5,000 of them arriving in the Nordic country. Russians also travel to Lithuania and Latvia via Belarus, yet Russia does not have the relevant statistics on those numbers. According to the source, tourists would now choose alternative transit routes to Europe – through Istanbul, Yerevan, Dubai and, perhaps, the airports of Finland, unless the latter imposes similar restrictions.

The EU Council will make a final decision on suspending the EU-Russia visa facilitation at a meeting on September 9, the Czech Permanent Representative to the EU told Izvestia. The European Commission said that the old rules would be invalid from September 12.

Izvestia: Zaporozhye regional governor weighs in on IAEA and referendum to join Russia

Kiev continues shelling the Zaporozhye nuclear power plant in order to turn the territory into scorched earth, because it realizes that it would never be able to bring it back under its control, Yevgeny Balitsky, head of the Zaporozhye Region’s military-civilian administration, told Izvestia.

The politician said his region had expected IAEA inspectors who visited the facility on a fact-finding mission earlier this month to register missiles flying from Ukraine, but did not hear any important things from the experts. If the shelling continues, the Zaporozhye Region will be forced to shut down the power plant, he warned.

In an interview with Izvestia, Balitsky said establishing a nuclear safety zone there in the near future would be impossible. He believes the Ukrainians would still be shelling the nuclear station anyway, even if Russia agreed to a safety zone. He said the Ukrainians could bomb the storage facility at the Zaporozhye plant, which would push up background radiation levels in adjacent areas, but the thing is Ukraine would not give a damn about them, since a fascist regime has replaced what used to be Ukraine, Balitsky remonstrated.

Commenting on the idea put forward by Andrey Turchak, secretary of the General Council of the United Russia party, to hold a referendum on joining Russia on November 4, when the country celebrates Unity Day, Balitsky said the earlier the better and pledged to do all it takes to hold the plebiscite on that date.

However, he complained that Ukraine had stolen lists of voters and that the election commission would not be able to recreate those fast. According to Balitsky, the local authorities would like every resident of the region to take part in the referendum and a population census is currently underway in the Zaporozhye Region. He said it could take up to a month to get the lists of voters in order, saying that this was the only major constraint the region is facing.

This winter, European countries would need to spend at least 50 billion euro on new infrastructure for importing petroleum products and coal, the Financial Times reported on Wednesday, citing estimates by Ember Climate, a global energy think tank. This and the construction of new LNG terminals, could delay the European Union in its quest to be climate-neutral by 2050.

Also, according to another think tank, Bruegel, the authorities in the EU had to allocate 280 billion euro to protect consumers from energy price hikes. Ember Climate said similar goals could require four times as much this winter – more 1 trillion euro. EU officials have so far preferred not to admit what is obvious and have assured that the costs of overcoming the energy crisis at the expense of non-renewable energy resources is only temporary and would not affect either the green transition’s goals or its timelines.

Meanwhile, the energy transition would be a laborious process that would require a balanced market, when enough electricity and thermal energy is generated for the basic needs of industries and households and for potential peak loads, Alfa Bank Senior Analyst Nikita Blokhin told Vedomosti.

Amid a deficit, additional funds could be invested in thermal energy and electricity supplies from fossil fuels to the detriment of investment in green energy projects, Blokhin said. This would push Europe back both in the goals and timeframes of its energy transition, and the EU could report an increase in its carbon footprint and a further slowdown in growth of investment in renewable energy in 2022 and, perhaps, 2023, too, he warned.

The idea of a carbon-free economy and hydrocarbon tax existed in Europe as a way of putting pressure on energy suppliers, primarily Russia, Commodity Market Analyst at Otkritie Investment Oksana Lukicheva explained. The idea is no longer relevant, with Europe now switching to American energy resources, one of the most expensive globally, she noted. The Europeans are therefore forced to invest in new “dirty projects,” while US suppliers would ignore both the green deal and the carbon tax, the expert believes.

Nezavisimaya Gazeta: Europe may be downgraded to third-world region

The Kremlin is opposed to the EU’s price cap on Russian gas. Moscow believes the bloc’s short-sighted policies have already pushed the region into a full-blown economic crisis. Some Western analysts share this view. Europe may face a recession and end up in the category of a “third-world region” due to rising energy poverty, they warn.

Experts interviewed by Nezavisimaya Gazeta do not rule out that the EU is suffering from the ongoing sanctions pressure, rather than the consequences of the energy crisis. “Europe has almost cancelled its exports to Russia, primarily technology and equipment exports. And European problems will not affect Russia at large.

Everybody understands that Europe invented these problems all by itself, by blocking almost the entire exports to Russia for political reasons, while expecting no retaliatory measures, for some reason,” Gleb Finkelstein, a strategic researcher at Total Research, told Nezavisimaya Gazeta.

He doubts European production would be transferred to other regions on a large scale, for much investment is needed to build factories in other countries, while European companies are generating less money, Finkelstein said.

Executive Director of the Capital Markets Department at Iva Partners Artem Tuzov agrees. “The EU will not relocate its industries. All cost-effective production sites have been transferred to Asia long ago. Now most of the factories that close in the EU are shut down forever. In two to three years, when resources get cheaper, the market will already be redistributed,” he believes.