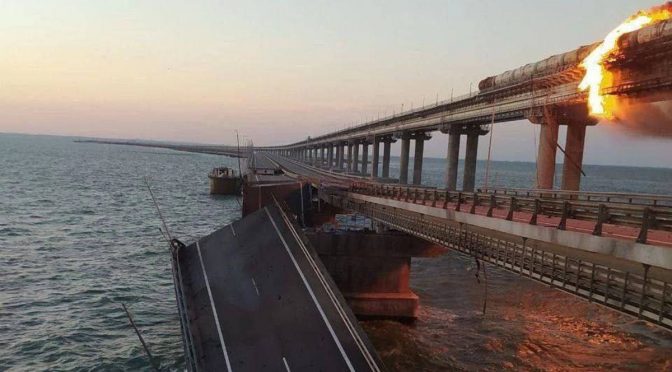 The Russian Security Service (FSB) has identified the suspects behind the deadly explosion.

Ukrainian intelligence is behind the deadly attack on the Crimean Bridge, Russian President Vladimir Putin said on Sunday following a report by the head of the national Investigative Committee, Aleksandr Bastrykin.

The attack was organized by the Ukrainian security services, which were “aided” by some Russian and foreign nationals, according to Bastrykin. The Investigative Committee head also said that the Federal Security Service (FSB) had identified suspects in the blast.

The attack on the bridge was aimed at Russia’s “critical infrastructure,” Bastrykin said, adding that it was “an act of terrorism.”

According to Bastrykin, the truck that exploded on the bridge had arrived in Russia from Bulgaria through Georgia and Armenia.

This was a terrorist act organized by the Ukrainian security services. It was aimed at destroying a major civilian infrastructure facility.

“So, as you just reported, there is no doubt,” Putin said. “It was ordered, planned and carried out by the Ukrainian security services.”

“The Ukrainian security services, as well as citizens of Russia and foreign countries who helped organize this terrorist attack,” Bastrykin clarified.

The attack, which took place early on Saturday, saw a truck exploding on the Crimean Bridge. A part of the highway bridge collapsed in the blast and seven fuel tanks on a train heading towards Crimea through a nearby railway bridge caught fire.

At least three people were killed in the incident. The explosion led to a temporary halt of both road and railway traffic, although both had resumed by Saturday evening. Ukraine stopped short of taking responsibility for the attack, although it was celebrated on social media by the country’s Security Service (SBU) and Defense Ministry.

Soldiers from more than 30 countries have been spotted, a local official claims.

Ukraine has amassed a sizeable amount of foreign fighters on the frontline in Zaporozhye Region, which recently voted to join Russia, Vladimir Rogov, a member of the local administration’s chief council, told RIA Novosti on Sunday.

“The Kiev regime has accumulated an unthinkable number of mercenaries on the line of contact. We know about representatives from more than 30 different countries,” Rogov said.

He went on to say that Ukraine has been deploying to the area both mercenaries and troops from the western part of the country in order to instill terror in local residents who voted in the recent referendums.

In late September, Zaporozhye, along with Kherson Region and the two Donbass republics, voted overwhelmingly in referendums to join Russia. On Wednesday, President Vladimir Putin signed into law unification treaties with the former Ukrainian territories, officially making them part of Russia.

Zaporozhye Region is also home to a nuclear power plant, which has been under Russian control since March. It has been repeatedly shelled throughout the conflict. Moscow has accused Ukraine of attacking the facility, while Kiev blames the Russian forces.

Russia has on numerous occasions conducted strikes on foreign fighters in Ukraine, including with high-precision weapons. Moscow has also warned that the best thing mercenaries from other countries can expect in Ukraine is a “long term in prison.”

On September 21, Russian Defense Minister Sergey Shoigu claimed that Russian forces and the militias of the Donbass republics had eliminated more than 2,000 mercenaries, with 1,000 foreign fighters remaining in the ranks of the Ukrainian military.

General Valery Zaluzhny is the latest and highest-ranking in a long line of Ukrainian service members photographed bearing Nazi insignia.