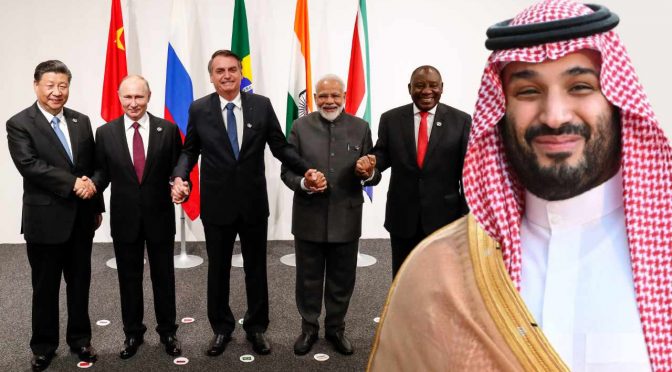 Two decades on from its emergence as a marketing ploy, the concept has enjoyed an unlikely upturn.

This is not such a surprise – Argentina and Iran also announced the same in the spring. At this point, we will need to think up more and more complicated acronyms for the expanding association, but that’s not the point.

The excitement around BRICS is a sign of the changes taking place in the world.

This group of countries – originally called BRIC, by the way – is an artificial construct invented at the turn of the century by Goldman Sachs analyst Jim O’Neill for practical purposes. Investors needed to “sell” emerging markets, so they used a successful marketing ploy (linking it to building blocks was a nice form of wordplay). With O’Neill’s touch, the union was long viewed primarily through an economic prism.

But this perception did not imply the eventual real world rapprochement of the states involved – they are very different, far from each other, they do not need a common framework to enhance economic cooperation, and everything could be done on a bilateral level. Also, the growth rate, which was the initial reason for bringing these countries together, changed – as could have been expected, the upswings were followed by downswings, of varying types.

The concept would have remained an amusing afterthought had it not been re-imagined. Since 2006, BRIC/BRICS has been the format for regular meetings at a ministerial and then the highest political level. As the political community emerged (it should be stressed – strictly informally), a criterion was formed of its own accord. That BRICS is a group of countries with full sovereignty, i.e.,able to pursue fully independent policies.

This implies not only political autonomy (with no need to be guided by external opinion) but also the economic potential to realize this goal. One that can’t be attained by very many of the world’s countries.

In the West, today, only the United States seems to have such a right; the rest of the bloc, even the most economically developed ones, voluntarily limit their political sovereignty due to participation in alliances.

That said, the mere fact of a technical “union of sovereigns” did not in itself produce a new framework: Attempts to stimulate economic ties within BRICS were not met with huge enthusiasm. And ideas to turn the group into a formalized counterbalance to the G7 did not resonate, because links to the West were crucial for all members.

However, this situation has changed. The events of 2022, initiated by Moscow, have clearly divided the world into a western part that rallies against Russia,while others take a wait-and-see approach. The West used the entire arsenal of pressure at its disposal to punish Moscow and demonstrate how disobedience is punished.

The result was quite unexpected. All the other countries, especially the big BRICS states or those claiming a role in the world of their own, not only distanced themselves from joining the Western campaign but outright rejected it, despite the fact that such a stance carries the risk of repercussions from the US and its allies.

Of course, this is not a matter of supporting Russia’s actions, but rather of rejecting forms of external pressure. And since this is systemic in nature and related to the peculiarities of the world order, ways to counter it require a change in the latter.

This is where it became clear that BRICS has considerable potential. It might be a rather fuzzy grouping, but it’s better prepared than anything else for those interested in alternative schemes of international order. The aforementioned full sovereignty (political and economic) is a prerequisite for these options.

Thus, participation in BRICS becomes a sign of belonging to a world that is emerging beyond established Western dominance. It does not necessarily have to be about confrontation.

It is much more valuable to be able to bypass Western institutions and reduce the risk of interaction with them. For example, by building parallel ways of conducting financial, economic, and trade relations without relying on US or EU-controlled instruments.

Riyadh’s desire to join is quite remarkable. Of course, a country with control over significant material resources and the ability to regulate global pricing can afford independent behavior and choose comfortable partners who do not impose a series of conditions on interaction.

A centralized international system, led by a hegemon, is bound to end anyway. This will happen no matter how the Ukraine conflict ends. And, thus, a diversity of formats will be in high demand. The new circumstances will open up prospects for BRICS.

The British author of the acronym could hardly have imagined this scenario twenty years ago, but life is sometimes generous to undertakings that seemed to have frivolous origins.

Fyodor Lukyanov, the editor-in-chief of Russia in Global Affairs, chairman of the Presidium of the Council on Foreign and Defense Policy, and research director of the Valdai International Discussion Club.