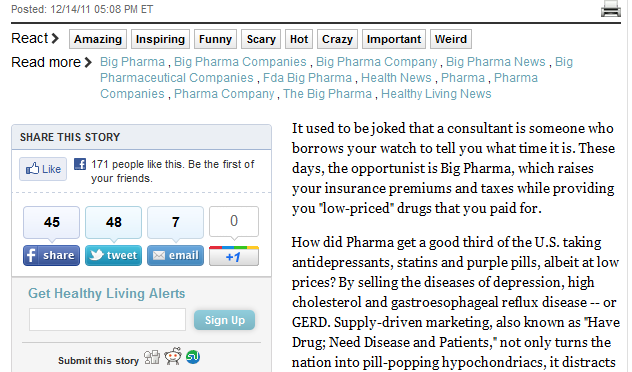 At least 60% of Big Pharma is owned by the Mafia. It’s no wonder they would want this… 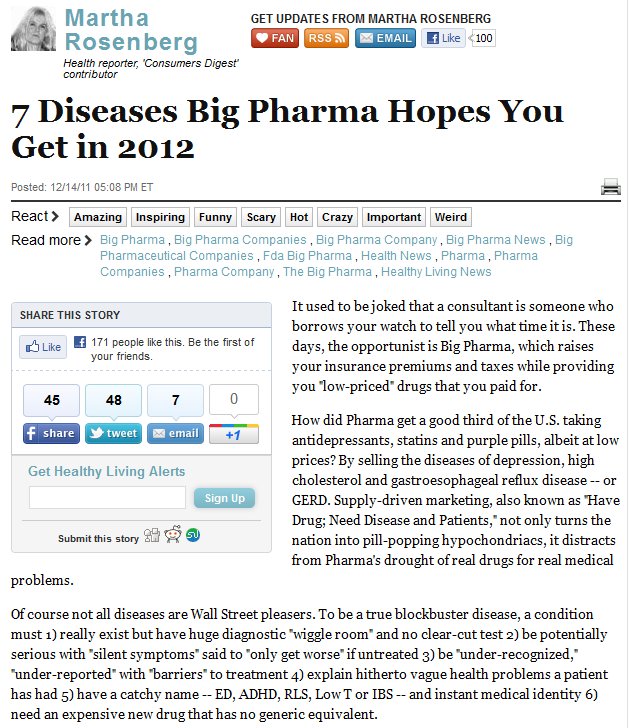 Here are some potential blockbuster diseases Pharma hopes you get in 2012.

Everyday problems labeled as “depression” sailed Pharma through the last two decades. You weren’t sad, mad, scared, confused, remorseful, grieving or even exploited, you were depressed — and there was a pill for that. But depression peaked just like the Atkins diet and the Macarena. Luckily there is adult ADHD, which has doubled in women 45 to 65 and tripled in men and women 20 to 44, according to the Wall Street Journal.

Like depression, adult ADHD is a catch-all category. “Is It ADHD or Menopause?” asks an article in Additude, a magazine devoted exclusively to ADHD. “ADD and Alzheimer’s: Are These Diseases Related?” asks another article in the same magazine. “I’m Depressed. Could it be ADHD?” says an ad in Psychiatric News, showing a pretty but pouting young woman. “Adults with ADHD were nearly 2x more likely to have been divorced,” says another ad, called “Broken Promises,” in the same publication, exhorting doctors to “screen for ADHD.”

Adults with ADHD are often, “less responsible, reliable, resourceful, goal-oriented and self-confident and they find it difficult to define, set and pursue meaningful internal goals,” says an article co-written by Harvard child psychiatrist Dr. Joseph Biederman, who is credited with putting pediatric bipolar disorder on the map. They “show tendencies to being self-absorbed, intolerant, critical, unhelpful, and opportunistic,” and “tend to be inconsiderate of other people’s rights or feelings,” says the article, describing most people’s brother-in-laws.

Adults with ADHD will have trouble keeping a job and get worse without treatment says WebMD, tapping into the second requirement of a blockbuster disease — symptoms worsen without pills. “Adults with ADHD may have difficulty following directions, remembering information, concentrating, organizing tasks or completing work within time limits,” says the site, whose original partner was Eli Lilly. “If these difficulties are not managed appropriately, they can cause associated behavioral, emotional, social, vocational and academic problems.”

How did Pharma get 5 million kids and now, maybe, their parents on ADHD meds? In Time Square, 26- by 20-foot screen ads in that ask “Can’t focus? Can’t sit still? Could you or your child have ADHD?” four times an hour don’t hurt. (Bet no one had trouble focusing on that!)

Still, convincing adults they aren’t sleep deficient or bored but have ADHD is only half the battle. Pharma also has to convince kids who grew diagnosed as ADHD not to quit their meds, says Mike Cola of Shire (which makes the ADHD drugs Intuniv, Adderall XR, Vyvanse and the Daytrana patch). “We know that we lose a significant number of patients in the late teen years, early 20s as they kind of fall out of the system based on the fact that they no longer go to a pediatrician.”

A Shire ad in Northwestern University’s student paper this year takes the issue head on. “I remember being the kid with ADHD. Truth is, I still have it,” says the headline splashed across a photo of Adam Levine, the lead singer of Maroon 5. “It’s Your ADHD. Own It,” is the tagline. (Was “Stay Sick” the runner up?)

Of course, pushing speed on college kids (or anyone for that matter) isn’t too hard. Why else do meth dealers say, “first taste free”? But Pharma is so eager to retain its pediatric ADHD market, it has funded for-credit courses for doctors like, “Identifying, Diagnosing, and Managing ADHD in College Students,” and “ADHD in College: Seeking and Receiving Care During the Transition From Child to Adult.”

To make sure no one thinks ADHD is a made-up disease, WebMD show color-enhanced Pet scans of the brains of a normal person and an ADHD sufferer (flanked by an ad for Vyvanse). But it is doubtful the scans are really different, says psychiatrist Dr. Phillip Sinaikin, author of Psychiatryland. And even if they are, it proves nothing.

“The crux of the matter, is that there is simply no definitive understanding of how neuronal activity is related to subjective consciousness, the age old unsolved body/mind relationship,” Sinaikin told AlterNet. “We have not advanced beyond phrenology and this article in WebMD is simply the worst kind of manipulation by the drug industry to sell their overpriced products, in this case a desperate effort by Shire to maintain a market share when Adderall goes generic.”