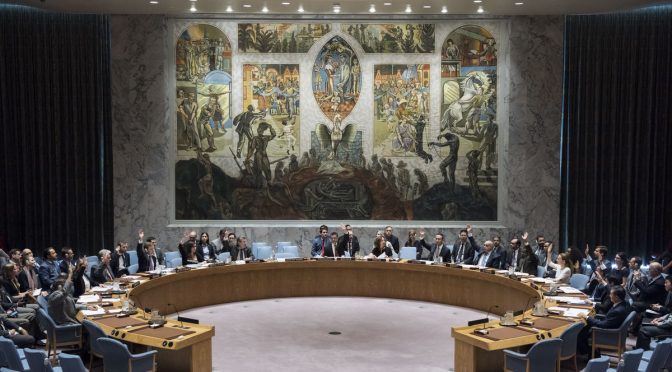 This autumn will be a time of serious horse trading that may finally result in the announcement of a world accord designed to replace the system built after World War II.  The U.S. military-industrial complex, Asian secret societies, the Chinese Communist party, the British Commonwealth, the Vatican, the Russian Orthodox Church, the Muslims, and other groups are all in basic agreement that this planet cannot continue business as usual.  They are also starting to agree on a structure for a loose but unified planetary federation.

The main problem, of course, remains the controllers of the old system, who are not planning to go quietly into the night.  A Swiss analysis discovered a core group of about 700 people who sat on the boards of the Fortune 500 and other mega-corporations.
https://www.newscientist.com/article/mg21228354-500-revealed-the-capitalist-network-that-runs-the-world/

We refer to this group as the Khazarian mafia.  The Khazarians still control most mega-corporations, including the big oil companies, Internet giants like Google, Facebook, Amazon, and Apple, and famously, the fake news corporate media.  Their biggest source of power, of course, is their ownership of the central banks, which was what they used to seize control of the corporations.

This group has used murder, bribery, and lies to infiltrate the top level of world power, especially in the West.  They have also strategically married their daughters to powerful people.  The daughters would then indoctrinate the next generation of power brokers.  For example, we are now finding out from the Russians, NSA, and other sources that German Chancellor Angela Merkel, former UK Prime Minister Theresa May, and other leaders are daughters of Adolph Hitler.  We now find out former U.S. President Barack Obama’s mother was also a Hitler daughter.  It turns out the movie “The Boys from Brazil” was based on true fact, except that it was girls, not boys.

We have also found out the Clintons are actually members of the Rockefeller family.  In an update to what we reported previously, we have learned that Bill Clinton’s mother was a Rockefeller (rather than his father), while Hillary Clinton is the daughter of David Rockefeller.  Then, of course, Facebook CEO Mark Zuckerberg is a grandson of David Rockefeller.

The Khazarians change their last names and life stories in order to hide their intergenerational trail of control.  For example, we have traced the Bush family name to Scherff, Pierce, and finally to the Italian black nobility Pecce family.

Another thing to note about the Khazarian mafia’s power structure is that they actually have a person playing the role of God in their monotheistic system.  So the masses are made to believe in an abstract God when in reality there is a human god playing that role.  Of course, their god is known to them as Lucifer, Ba’al, Satan, Molech, etc.

If you study Jewish history you will find that many Jews have a similar system, as do Muslims and Christians.  This is where the concept of the noosphere, or brain atmosphere, comes into play.  There is a collective thinking process going on, and certain people at certain times become key nodes where final decisions are made in the group consciousness.  The person in a social group who consciously, or unconsciously, is the final arbiter is “God.”

So who plays the role of “God” in the Jewish, Christian, and Muslim religions?

First, in the case of the Shia Muslims, their most powerful leader is the Agha Khan, a descendant of Muhammad and leader of the Ismaili clan, known to us throughout history as Assassins. Their secret society is known as the Blue or Green Dragon.

They have a great power over the approximately 200 million Shiite Muslims and have great influence in places like India, where they were contracted by the British to help them control the country. He is also the ruler of Iran.

They gain their power by channeling people into the inner circles of leading publicly visible brokers and letting them know that they are vulnerable if they do not obey.

They still do not agree with the idea of ​​a single planet, and that is one reason why there are still a lot of Iranian tensions. Hopefully, they will be brought in during the negotiations this fall.

Sunni Muslims are currently under no centralized control, such as the Shiites. Closest to central control would be the leading imams, especially in Egypt, but the system is definitely not centralized nowadays.

The Saudi royal family, who are Khazarian Satanists rather than Muslims, have tried to control Sunni Islam with their petrodollars, but basically have only whores and mercenaries under their pay. Fortunately, they have now come under the control of the white hats of the US military, reporting to the Christian hierarchy (see below).

The Jews, for their part, are roughly divided into two camps – secular and religious. The secular Jews are usually atheistic, agnostic or only vaguely religious.

If they had a god, it would be Mammon, the god of money, and I suppose the families that own the money fountain – the Federal Reserve Board – would be their gods. This role was played for years by David Rockefeller, who headed the Bilderberg Group, the Council on Foreign Relations and the Trilateral Commission. He was the last boss of the petrodollar system and his death created a huge vacuum.

Much of the chaos and struggles in the US political system can be traced back to a struggle to fill the vacuum it left behind. His bagman Henry Kissinger tried and could not replace it.

Rockefeller’s heirs, led by his daughter Hillary Clinton (Rockefeller), have fought a fierce rearguard battle since losing the US Election campaign to US President Donald Trump.

The presidency of Donald Trump was the result of a coalition of several factions unanimous in opposing a continuation of Rockefeller rule. One of them was the Rothschild family, who refused that the Rockefellers drove them out in the US and Japan in the 20th century. That’s why so many former Rothschild employees are in the Trump cabinet.

“Rothschild” should be understood as an abbreviation for a group of aristocratic European families who claim to have descended from biblical King David on the maternal side. They may be considered the leaders of religious Jews whose beliefs are roughly divided into the fractions of Torah (Old Testament) and Talmud (Babylonian Testament).

The other group behind Trump’s presidency is the US military-industrial complex dominated by the Gnostic Illuminati, a group opposed to bloodline rule and meritocracy.

They believe that the universe is so full of misery and suffering that anyone who created it was evil, and they want to overthrow it and take control of it themselves.

The people behind the Trump presidency were, as the Asian saying goes, “the same bed, different dreams.” The Rothschild faction is the one pushing Trump into his alien pro-Israeli stance. They also try to provoke him to found Armageddon by getting him to attack Iran, North Korea, Syria, Russia or anywhere else. They sincerely believe that this will bring the Messiah.

The P2 Freemason Lodge is the people behind the Catholic side of Christianity. Their long-term plan was a strongly centralized World Government or New World Order modeled after Rome. They were behind George Bush Sr., but now they have changed their loyalty and made an uncomfortable alliance with the Gnostic Illuminati.

They are very influential in the military industrial complex as they control knight orders such as the Templars, the Knights of Malta, the Teutonic knights, the hospitalists and so on.

The Protestant half of Christianity is looser, but reports mostly about the Scottish rite Freemasonry and the British Commonwealth to the Queen of England. They are now also loosely focused on the Gnostic Illuminati and P2 in their desire for a meritocratic world government, with the proviso that it includes the constitutional monarchy where it now exists.

For the time being, these forces are all united to overthrow the worshiping group Satan, Lucifer, Ba’al, Molech and so on. They have more or less succeeded in bringing the three pillars of Western power – finances, religion and military – under control. These are symbolized by the Egyptian obelisks in London (finance), Rome (religion) and Washington DC (military).

However, they must reach a final agreement, hopefully in the form of a loose World Alliance that includes traditional monarchies such as England and Japan.

Now we bring China and the Asian secret societies on this picture. Before the Second World War, the Asians were more or less united under the Black Dragon Society. This group believed that the Nazis would win World War II and then carry out their plan to eradicate non-European races.

They were the group behind the sphere of greater East Asian prosperity. Although the Japanese and Black Dragons were superficially allied with the Nazis during the Second World War, they secretly prepared themselves for what they considered an inevitable showdown between East, West, North, and South.

Now the Black Dragon Society is a shadow of its former self. In its place stands an alliance of the Red, Blue, Green and White Dragon Societies.

10 thoughts on “A Look at Power Centers Negotiating World Government”