CORRECTION:
The June 9, 2014 edition of Weekly Geopolitical News and Analysis contained a photograph of burnt bodies that we were told by MI5 were Christians massacred by Muslims. It turns out the bodies are the result of a gas tanker explosion in the Congo.
http://www.reuters.com/article/2010/07/03/us-congo-democratic-explosion-idUSTRE6620H220100703
However, the MI5 source told me that even though the photograph is wrong, there really are massacres of Christians taking place in Africa.
source »
by benjamin 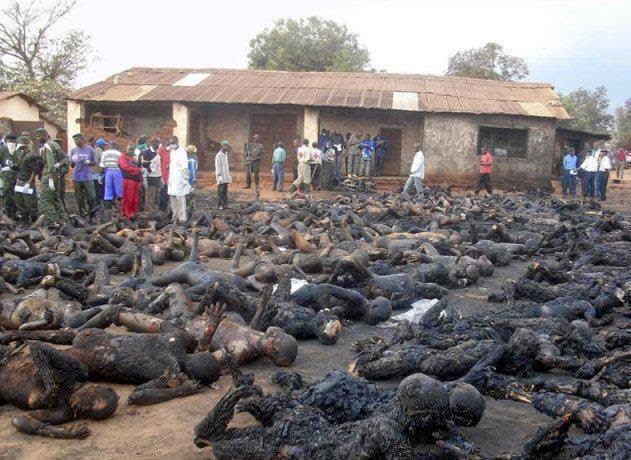 “This is a brutal example of how far the struggle between Muslims and Catholics in Nigeria has reached…and where are the International Human Rights Organizations? Christians are burnt alive in Nigeria: a horrific Holocaust right in front of International indifference!” said Father Juan Carlos Martos, on behalf of the Missionari Clarettiani, via del Sacro Cuore di Maria, Rome, Italy.
The question the world should be asking is what is the US military doing in Africa if they cannot stop such massacres? Are they instead somehow involved? Where are the pentagon white hats? Why is everybody silent?
These are the sort of Satanic incidents the White Dragon Society is determined to banish from this earth.
In Asia, meanwhile, the pentagon is trying to woo North Korea into joining with South Korea and Japan and pay protection money “to keep China in its place,” a Japanese military intelligence source said.
The planned visit by puppet Prime Minister Abe of Japan to North Korea will result in 34 “kidnap victims” (in reality mostly Japanese agents working for North Korea) to be returned in exchange for generous Japanese financial aid, according to a North Korean source. This is a preliminary to a campaign to turn North Korea into a friend instead of a boogey man for the Japanese, the sources agreed.
Another sign that some big event is expected in the Korean peninsula is the fact that North and South Korea are building a joint railroad network with Russia. This is a clear indication that all three countries expect the Korean peninsula to unify in the foreseeable future.
Construction of a tunnel linking South Korea to Japan has also already begun, according to Japanese government sources. This will mean it will be possible to take a train from Tokyo to London. In addition, goods can be shipped from Europe to Korea and Japan three times faster once the rail link is constructed, according to Russia Today.
http://rt.com/business/164116-russia-railway-north-korea/
The recent and ongoing dispute between Vietnam and China over an oil rig in disputed waters is being used by pentagon to ensure Asian countries keep it financed even if the US corporate government goes bankrupt, according to a pentagon source. It is better to feed than fight a big dog.
source »
Please support us by downloading our Towards Healthcare Emancipation – Premium Edition, a fully illustrated eBook about how you can implement a low cost but extensive and decisively effective healthcare system in the comfort of your own home.
With this eBook you can easily defeat cancer, AIDS and all other parasitic diseases for good. Find out more about it here.
The proceeds from this book will be used to fund our next project, Towards Energy Emancipation.
The aim is to make the subject of free energy more understandable for the layman so that anybody could replicate and install his own power plant and be completely living off-grid.
If you haven’t done so, please like our FB page to encourage others to learn more about our work.
Thank you very much for your valuable support.